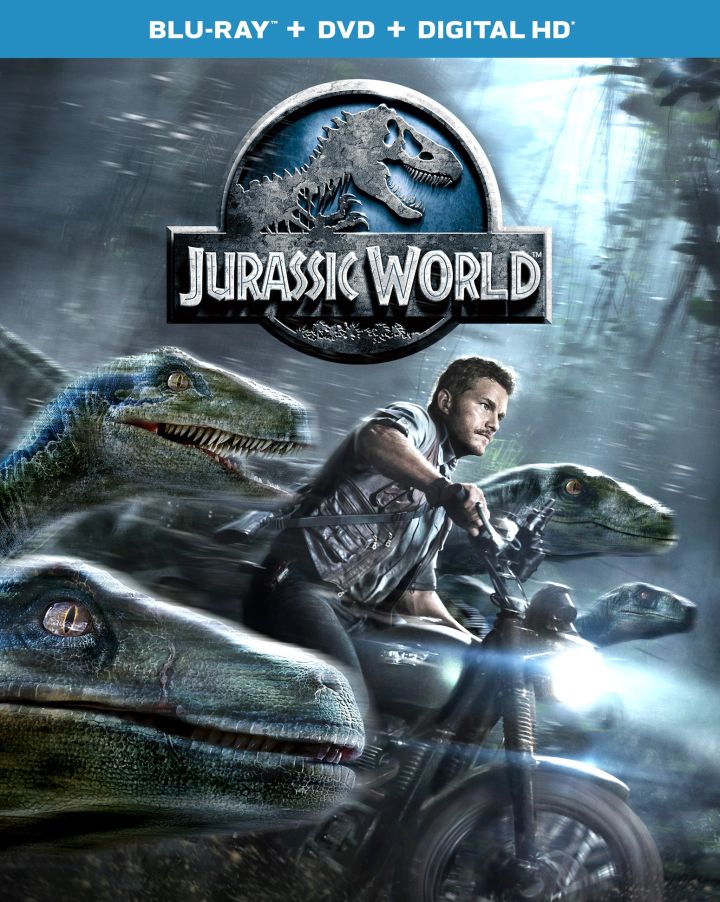 One of the biggest films even made, actually the 3rd highest grossing film ever ‘Jurassic World‘ is getting the Blu-ray treatment in 2D and 3D. Not only that, there will be an option for a limited edition Collectible Steel Packaging with tons of cool extras and the best video/audio presentations that Universal has to offer. The Blu-ray will be released October 20th with the Digital version being available on October 1st. I can’t wait to watch this again. Below you can read about all of the details and information. Don’t forget to pre-order.

THE #1 MOVIE OF THE YEAR PROVES THAT ONCE AGAIN,

EXPERIENCE IT IN STUNNING HI-DEFINITION WITH THE BD COMBO PACK

Shattering records globally, Jurassic World crushed the opening-weekend box-office, scoring the highest domestic, international and worldwide openings of all time.  The film has taken in more than $1.6 billion globally to become the third-highest grossing film in history.  Now fans can experience the thrill and awe when Jurassic World arrives on Digital HD on October 1, 2015 and on 3-D Blu-ray™, Blu-ray™, DVD and On Demand on October 20, 2015, from Universal Pictures Home Entertainment.  More than two decades since Steven Spielberg’s Jurassic Park was released, fans of the original films and new moviegoers alike can witness the story come full circle as the park that was only a promise comes to life.

Now, 22 years later, an even bigger and enormously popular attraction has risen on Isla Nubar: Jurassic World. To keep attendance high, the park operators introduce a new, genetically modified hybrid creature called Indominus Rex. Bigger, stronger and far more intelligent than any dinosaur that ever walked the earth; the secretive new breed also proves more dangerous than anyone ever anticipated. Executive-produced by franchise creator Steven Spielberg and directed by Colin Trevorrow (Safety Not Guaranteed), Jurassic World stars Chris Pratt (Guardians of the Galaxy, “Parks and Recreation”) as Owen Grady, the park’s ex-military expert in animal behavior, and Bryce Dallas Howard (The Help, The Twilight Saga), as Claire Dearing, Jurassic World’s driven careerist, teaming up to save the park’s tourists when chaos erupts.

INNOVATION CENTER TOUR WITH CHRIS PRATT:  Chris Pratt gives a tour of the Innovation Center, a museum/exhibit, built just for the movie.

WELCOME TO JURASSIC WORLD:  An in-depth take on the creation, look and feel of Jurassic World.  Director Colin Trevorrow and Steven Spielberg discuss how the idea of the film came together and how the casting was decided with actors’ commentary on their roles and filming locations.

JURASSIC’S CLOSEST SHAVES: Clips from all films in the franchise showing “near death” or extremely scary encounters with dinosaurs.

DINOSAURS ROAM ONCE AGAIN:  Behind the scenes look at the making of Jurassic World’s visual effects, how the dinosaurs came to life, and actors filmed scenes.

CHRIS & COLIN TAKE ON THE WORLD:   Chris Pratt and Colin Trevorrow (Director) interview each other and discuss Jurassic World as well as the other Jurassic Park movies.

The Jurassic World theme park lets guests experience the thrill of witnessing actual dinosaurs, but something ferocious lurks behind the park’s attractions – a genetically modified dinosaur with savage capabilities.  When the massive creature escapes, chaos erupts across the island.  Now it’s up to Owen (Chris Pratt) and Claire (Bryce Dallas Howard) to save the park’s tourists from an all-out prehistoric assault.

Based on Characters By: Michael Crichton