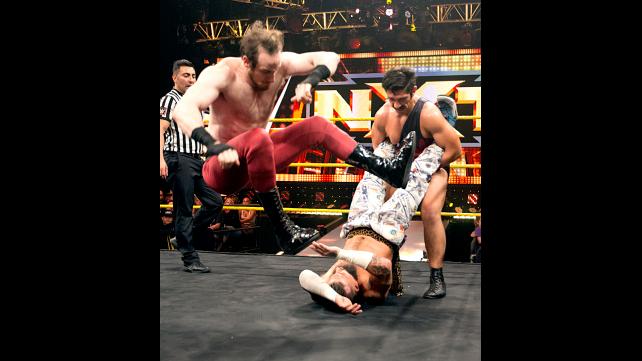 It was a huge night on WWE’s NXT (shown on the WWE Network for $9.99 a month) as it was announced last week, that there would be a tag team match to determine the #1 Contenders for the NXT Tag Team Titles between the returning Vaudevillians and Enzo Amore with Colin Cassady. The NXT Universe was also a buzz with the anticipated match between Dana Brooke and Emma versus NXT Women’s Champion, Sasha Banks, and a partner of her choosing. Did you happen to miss NXT? Check out what happened now!! 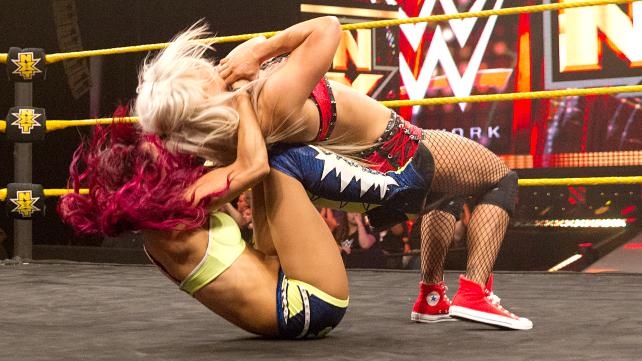 The night began in a huge way with NXT Women’s action. Dana and Emma made their way to the ring and soon they were joined by The Boss herself. She stated that no she could not find a partner but she didn’t need a partner to take on the Total Diva and the Aussie. But it was Sasha’s lucky day as her former BFF, Charlotte came to the ring and stated that she would be Banks’ partner, but that she would owe her one. Sasha accepted and the match was under way!

It was very clear that the chemistry between Banks and the Genetically superior Diva was still there despite recent history. With ease they dominated the first few minutes of the match before Charlotte was isolated from her partner by Emma and Dana as they used any means necessary to cut the ring in half. Quick tags insured that Brooke and her partner kept Charlotte from making the tag. However, Flair is no newb in the ring and she battled back and was able to make a tag and bring Sasha into the match.

Once in the ring, Banks showed exactly why she was the NXT Women’s Champion as she tore through both Emma and Dana Brooke. But it was Brooke that faced the pure wrath of the Boss as the Bank Statement was locked in while Charlotte neutralized Emma with her Figure 8.  Dana Brooke tapped and the win went to Sasha and Charlotte.

Charlotte and Sasha celebrated and it was reminiscent of their partnership of old. But before the champ could leave the ring, Charlotte said that what she wanted from Sasha was a shot at the NXT Women’s Title. Banks agreed and stated that the match would happen next week!

This match was awesome. I LOVE LOVE LOVE NXT Women’s Wrestling. These ladies really know how to tear down the house. When Charlotte came out to team with Sasha, a squeeled like a school girl. The two of them work flawlessly together. Their win over Dana and Emma continues to solidify their place as two of the greats in the Women’s Division as they continue to redefine what Women’s wrestling is in the WWE. Their match next week promises to be yet another classic bout between these two amazingly talented women. 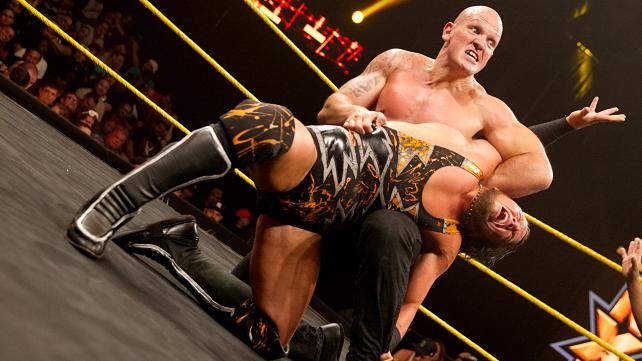 NXT’s resident little monster took on the crazy Frenchmen in one on one action. It was an interesting match between the two as Crowe and Louis went back and forth and traded blows. Louis concentrated his attacks on the midsection of Crowe but it was not enough to ensure the win. Gotta say Solomon pulled out an interesting offensive maneuver that almost looked like a swinging jumping cutter. It was pretty cool actually and actually exactly what the Hacker needed to swing the match in his favor. He locked in the Crowe bar and Marcus was done.

It is refreshing to have someone like Solomon Crowe on NXT. He isn’t polished, he isn’t crazy, he is however determined to insert himself in the hunt for the NXT Championship. His style is unique as you never know exactly what he is going to do. It is actually a little familiar. Hmm… where might I have seen his frenzied way of moving before? I do look forward to seeing what he is able to do in the future.

In a match that saw the #1 contendership for the NXT Tag titles on the line, Enzo and Big Cas took on the manliest duo in NXT. Both teams hit the ground running in an effort to prove they were the rightful ones to challenge Blake and Murphy for the prestigious championships. Aiden and Simon easily held on to control of the match as they kept Amore on their side of the ring with team work and quick tags.

But as often happens, Enzo was able to tag in his 7 foot partner and Cassady started to clean house. Huge powerful moves kept the Vaudevillians reeling and on the defensive. But just as it seemed that the Realest guys in the room were narrowing in on a victory and set up English for their signature double team maneuver, English was able to avoid it, and even though he was hit with a cross body, he rolled through it and used the momentum to roll Enzo up into a cover for the fall. Thus earning the # 1 contendership for the NXT Tag Team Championships for his team.

Such a fun match. These two teams held nothing back and gave each other a great fight. However, good ol fashioned work ethic and being manly won the day. In the future I would like to see Enzo and Cas go against Gotch and English again. Perhaps for the NXT Tag team titles? oh one can dream. Speaking of those championships, Blake and Murphy better have something up their sleeve if they expect to walk away with those titles. Perhaps the Princess of Sparkle will have something to do with the win like she did at the last TakeOver?