What is love in the mind of an addict?  What would you do to prove your love under a heroin haze?  Heaven Knows What takes the viewer on a twisted walk through the dark world of addiction on the streets of New York City.  The audience follows Harley (Arielle Holmes), a young woman whose addiction to heroin is almost as powerful as her addiction to her boyfriend, Ilya (Caleb Landry Jones).  Or is it the other way around?  Trying to make sense of a drug-ridden mind’s motivation or intention is a lost cause.  Perhaps this fact led to the film’s title.  Truly, who could understand why an addict would do anything.

Based on a true story, Heaven Knows What opens with the couple rolling around in a passionate embrace.  Then suddenly Harley is alone and is weeping.  She has lost her Ilya.  Harley tracks down Ilya in the local library and professes her true love for him.  Ilya brutally shuns and insults Harley as she proposes to prove her love.  Will Harley win back Ilya?

Holmes is not only the protagonist of Heaven Knows What, but she wrote Mad Love in New York City from which the film is based.  Mad Love in New York City is Holmes’ memoir of her homeless existence.  This is Holmes’ debut role and she is quite believable.  You might be asking yourself, “Where have I seen Jones?”  I first saw Jones as Banshee in X-Men: First Class.  We will see more from this Garland, TX native.  As Ilya, Jones is mysterious and a mean piece of work.  According to the directors, Josh and Benny Safdie, Jones is known for his dive head first into the character method.  At first, I barely recognized Jones; he became someone completely animalistic, a solid performance. 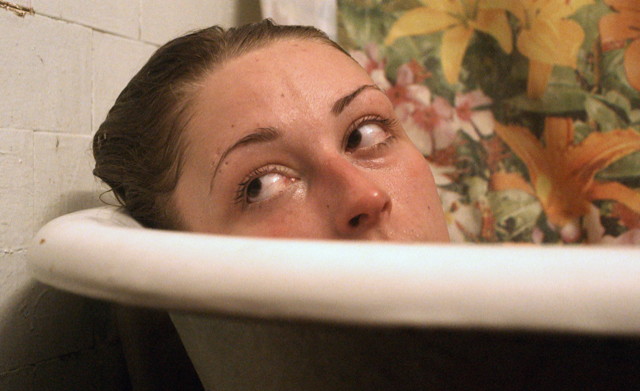 Heaven Knows What is shot documentary-style and looks pretty real.  The plot is somewhat aimless, but that goes hand in hand with an addict’s mindset.  It’s all about that next fix drug or “love.”  This is not a film where you should expect to have a joyous time or be entertained.  You will get an in your face perspective of the hard times and addiction suffered daily by many kids on the streets of New York City and I would add other cities as well.  Heaven Knows What is a blend of Where the Day Takes You and the highly controversial indie films Streetwise and Kids.

All three films show a glimpse of this heart-wrenching lifestyle.  You’re left wondering why do they continue to exist this way.  Is it for freedom, the drugs, or fear?  Whatever their reason, Heaven Knows What is very disturbing.  Unless, you like watching life’s tragedies in their most raw form, I would warrant caution when choosing this weekend’s film.  Heaven Knows What opens Friday and only at the Angelika in Mockingbird Station if you’re in Dallas.