Since Dallas Comic Con has been acquired by Canadian parent company Fan Expo, the guest list for this event has expanded and grown to almost astronomical proportions. This May, it was no exception! They really pulled out all the stops and had almost all of Dallas Convention Center (with the exclusion of the F Exhibit Hall) open for business.

Our three day post-Memorial Weekend followed the coattails of Houston’s sensational Comicpalooza, and Fan Expo really had to grab everyone, so why not bring the nerd-grandfather Stan Lee as the headliner for the weekend? From what I understand, he was just as gracious and kind as he’s always been, and even commissioned some drawings from local artist Terry Parr of ShoNuff Studios for his booth! How is that for a incredible start to the weekend?

Our guests were amazing: Gillian Anderson and Mitch Pileggi of the X-Files, Ernie Hudson of Ghostbusters and OZ, Carrie Fisher from Star Wars, Sylvester McCoy, Karen Gillan and Billie Piper of Dr. Who Fame, as well as Ming-Na Wen of Agents of S.H.I.E.L.D. Joe Pilato, Jarlath Conroy, and Terry Alexander of Day of the Dead,  and super con-busters and staples: Nathan Fillion and Alan Tudyk, notably of the late Firefly. These are, of course, just SOME of the guests. Fan Expo spared no expense this year, and brought in major cosplay guests as well: Vamptress LeAnna Vamp, of I Love Nerd Girls and Star Wars Girls, Mika Nicole, Riddle of Heroes of Cosplay and even male cosplayer Calen Hoffman. These coslayers, were wonderful and delightful and some powerful people.

The cosplay this year was strong, so strong, I had to cover it separately. I did get to see some killer costumes though- Matt Murdoch’s mojo was on point this year, as was Peggy Carter, due to her serious popularity. My favorite costume I saw though belonged fellow Boomstick writer Black Mariah, dressed as Tina Belcher. For the WIN! 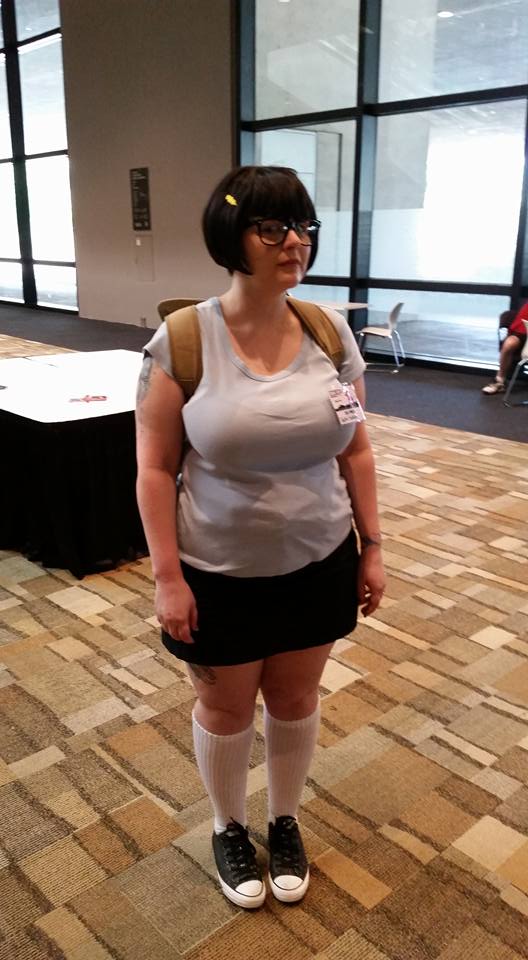 Lines for autographs were long, and photos too, but totally worth it. People stood in line for an hour or more, but look at the smile on my face. I could not have been happier. Alan Tudyk was so gracious to me. And Ming-Na made me feel perfect when I geeked out at her table.

Artist Alley was back to back with Celebrity Row and everything flowed so smoothly. I was happy to roam tables and tables of art and came away with some new pieces, including a new Supernatural piece that is set up like Saints. It’s priceless.

This year also featured another kind of experience, the Insidious 4D haunted house. It was insane, and totally creepy. I thoroughly enjoyed that too. It takes your picture twice throughout the experience, so you can see your fear,  and the results can be hilarious, as previously seen with this reporter. I screamed and the line for this was always packed.

I think my favorite moment of the convention was being able to interview Georges Jeanty of Dark Horse Comics fame. Georges is known for his work on Buffy Seasons 8, and bringing our lady slayer back to life. He would say, “Hey you, “every time I walked past his table. I was  so lucky to get a signed print of Faith and Buffy while it lasted!!! 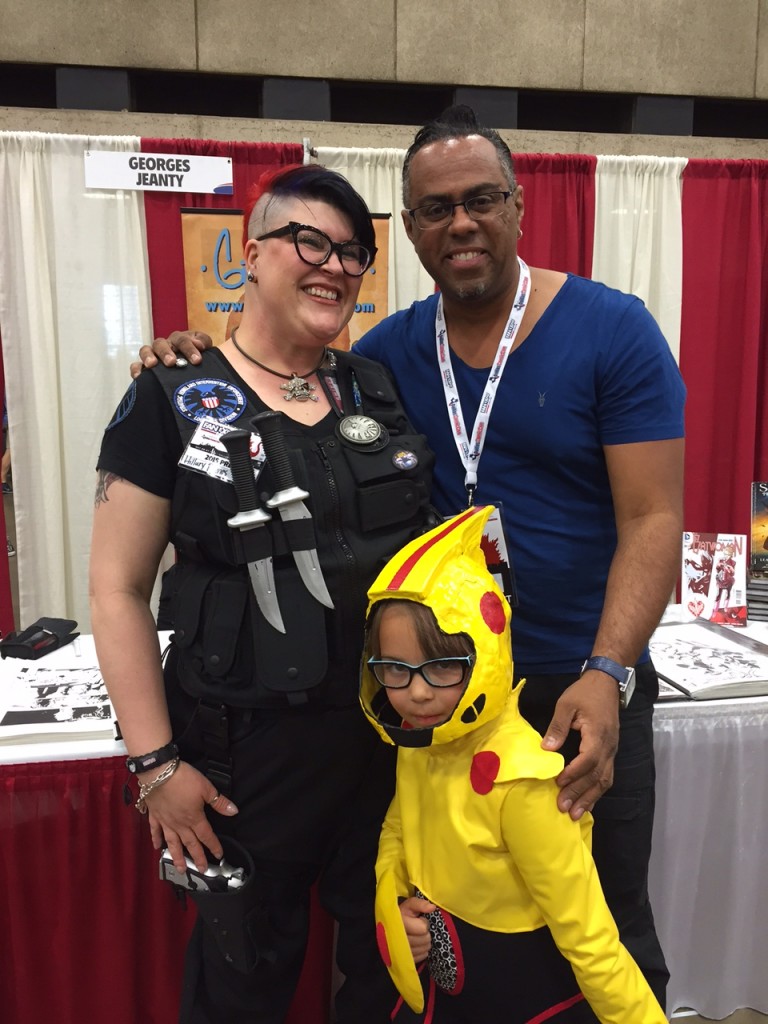 Other artists who were here: Bob Layton, known for Iron Man; Alex Maleev, known for Daredevil; legend Bernie Wrightson, and Jimmy Pamiotti and Amanda Conner, just to name a few! Seriously, it was a marvelous turn out!

Fan Expo Dallas ran three days, and each day was packed with panels (Hosted by Devin Pike, James Wallace and Mark Walters to name a few), photo-ops and shopping for everyone. The panels were so incredible, but unfortunately so many that I could not attend them all. 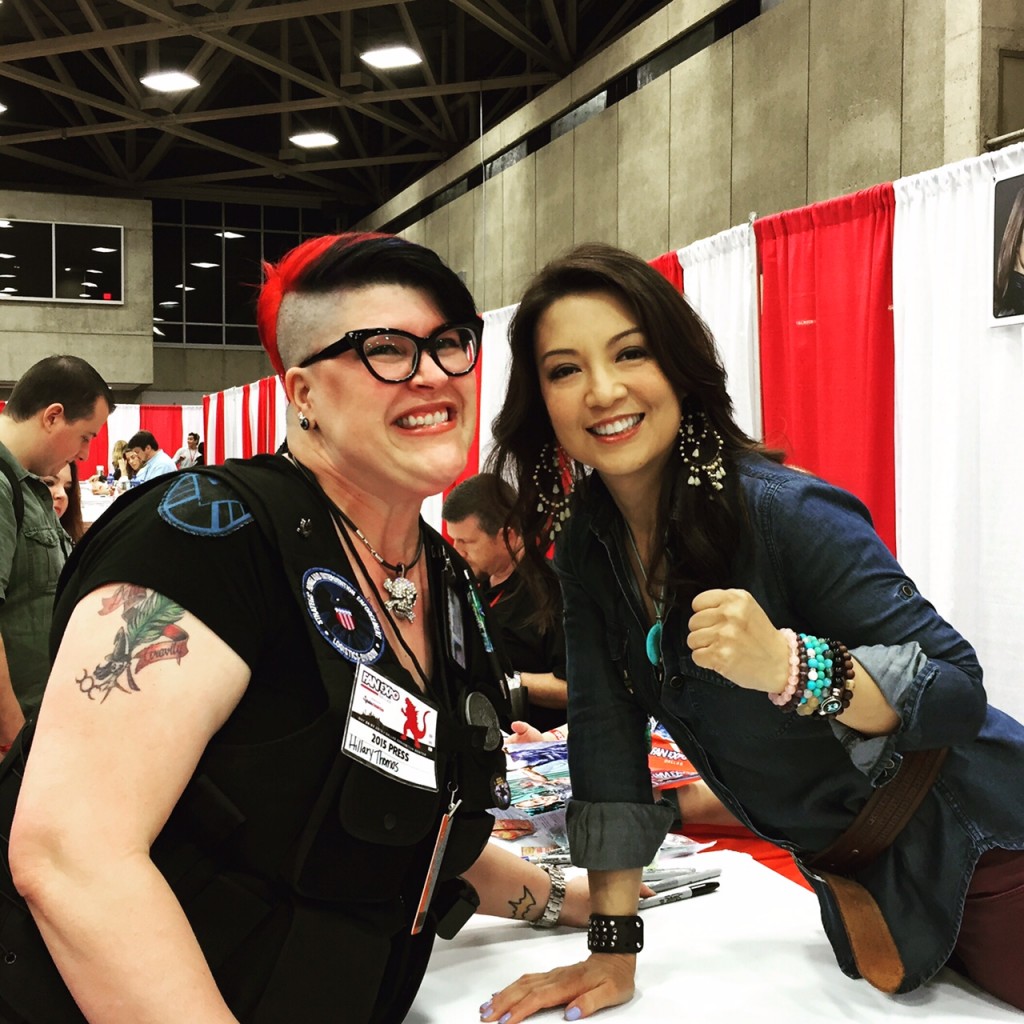 The ones I did attend were life changing, and I’m glad I went. I will however, not miss the opportunity to see James Wallace of the Alamo Drafthouse host a panel in the future. Apparently he and Gillian Anderson get along famously.

This Babe of Boomstick Comics cannot wait for October. I’m still riding on that high!