I am saying “Aloha” to Aloha, but it’s not a hello.  It’s a disappointing goodbye.  Aloha begins with the return to Hawaii of Brian Gilcrest (Bradley Cooper), a former soldier that suffered a horrendous missile attack.  This fact is hard to believe since Cooper is inconsistent in his performance of this impairment.  One minute Gilcrest is somewhat struggling as he walks and the next minute he is effortlessly able to lollygag along the street in a love montage.  Due to his shady history of embezzlement, Gilcrest is assigned a military watchdog Captain Allison Ng (Emma Stone).  Captain Ng is hyper, anal, dry, and in love and proud of Hawaii and her ¼ Hawaiian heritage.  She also greatly admires Gilcrest for his achievements in space, technology, physics or something.  His expertise is not really clear in the film.  During Gilcrest’s previous time in Hawaii he fell in love with Tracy Woodside (Rachel McAdams).  Gilcrest suddenly left Woodside hanging.  What will happen when he sees her again and she him?

Aloha took on too much which cluttered the plot.  There is a love triangle that is and is not as well as really being a love rectangle.  Could you follow that?  Imagine watching that dilemma.  Also, the message was very clear about the treatment of native Hawaiians by the United States.  Dennis Bumpy Kanahele, the leader of the Nation of Hawai’i, embodies this message in his performance.  I love Bumpy’s t-shirt, which is prominently positioned in throughout the film, “Hawaiian by birth; American by force.”  Prior to seeing this film, I never really thought of Hawai’i being a military conquest.

Although I am proud to be an American, I confess there are some pretty messed up actions that our country has committed.  Aloha was disappointing in that they barely scratched the surface of this travesty.  In addition to the love story, Hawaiian history and current events, Aloha also tackles the Outer Space Treaty of 1967 and the threat of weapons being launched into orbit.  The film did not flow well due to purpose overload.  Two of these plot points could have been thoroughly presented and the film would have had continuity.  Adding the third element prohibited a coherent flow that a viewer could follow and enjoy. 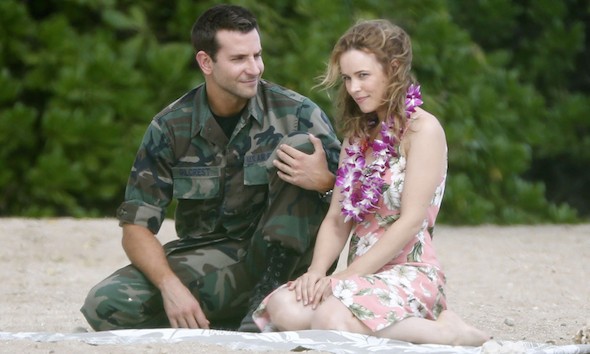 As a ROMCOM, Aloha was not very funny.  I believe there were only about 3 times when people laughed in the screening.  Cooper and Stone both are known for their comedic abilities, but the chemistry just was not there in this film.  At one point, I started seeing similar sequences from Six Days, Seven Nights with Harrison Ford and Anne Heche.  Gilcrest and Ng share the same annoyed and amorous beginnings as Quinn Harris and Robin Monroe, their characters from Six Days, Seven Nights, did.

Stone did a much better job of bringing the chuckles even though her character was pretty much a nerdy, goody two-shoes.  I have enjoyed Stone’s performances since I first saw her in The House Bunny and Zombieland.  She has usually been highly relatable to the masses in her roles.  In The Help, she amazed me with her ability to bring out the earnestness of Skeeter Phelan.  Surely great things lie ahead for Stone as she continues with her acting career.  I must be one of the few women in the world that is immune to Cooper’s looks.

Perhaps it was his dialogue or its delivery, but he was not a leading man.  The best scene he had was a silent subtitled sequence.  (Yeah, if you choose to see this film, you will get what that means)  McAdams’ character was positively a rambling and annoying mess of a woman.  Even one of my favorite actors, Bill Murray, could not make this film a successful comedy.  Murray portrays Carson Welch, a billionaire that wants to rule the world.  Welch’s sporadic appearances in this film make you forget that he is one of the three plot points.  When I say successful, I mean an enjoyable and interesting tale.  This movie will make some money because of its star roster for at least the first week or so.