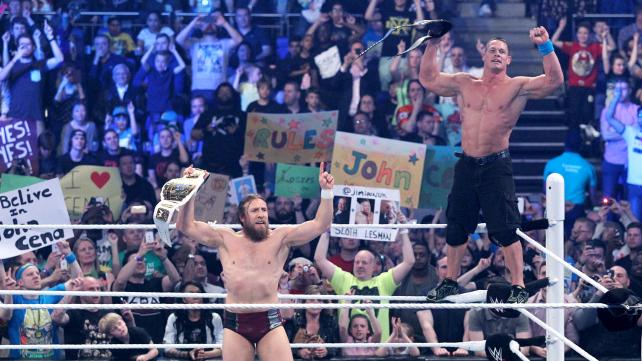 The WWE once again came to us from London, England, this time with Smackdown! And once again the WWE Superstars did their best to tear the house down with high impact matches that left the crowd hungry for more. It was a night to showcase champions in a tag match, the return of the New Face of Fear and standing up to bullies. An exciting evening filled with ups and downs and explanations. Wanna know what happened? Find Out Now! 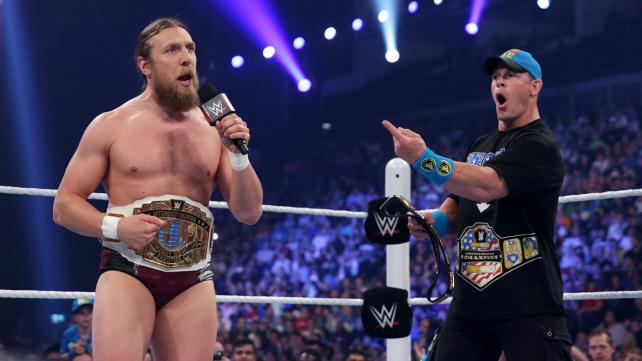 The night began with United States Champion, and the face that thinks it runs the place, John Cena. He took it upon himself to explain exactly how a Russian Chain match works. Basically, you are chained to your opponent and then beat the living crap out of him till you are able to touch all four corners of the ring with out him stopping you. You do that, you win. And while Rusev was guaranteed to be in the match at Extreme Rules, Cena said that his spot was not set in concrete as he once again invited any one in the back to take advantage of his open challenge. (I call it bullying the locker room one superstar at a time, but then again I just see Cena as a big bully anyway. Always picking on my boys.)

It wasn’t one superstar that answered, but two! The Fact Droppers, Tyson Kidd and Cesaro came out to do exactly that, drop some facts. The likes of which were near and dear to my heart about not wanting to see Cena and that he too should retire. Another fact that they dropped, the were the best champions in the current WWE (they might have stretched that one a bit, no one is better than our beloved WWE World Heavy Weight Champion, Seth Rollins.) This proclamation would bring out the WWE’s resident farm animal, Daniel Bryan who disagreed with them. He seemed to feel that him and Cena were the better champions. And to prove it, he proposed a champion tag match. Daniel Bryan and John Cena vs The Fact Droppers (yes I’m calling them that, no it’s not their official tag team name… yet… #fact) The tag team champions took a moment to think about it but ultimately they accepted the challenge. 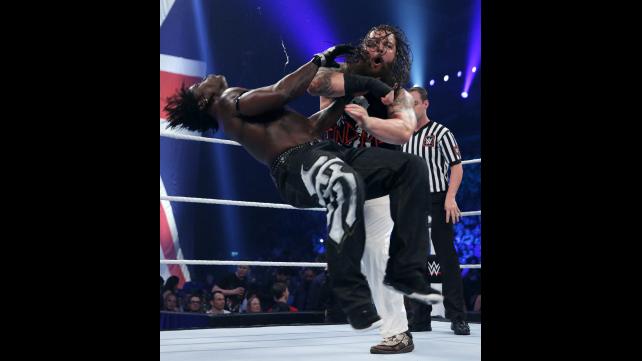 I knew from the get go this was not going to go well for R-Truth. I don’t believe he has ever won against Bray Wyatt, and this certainly wasn’t going to be a night to change history. Truth got in a slight offense but was shut down and Sister Abigailed into the mat.

It was short, not so sweet and a total beat down as the Eater of Worlds once again destroyed R-Truth. One has to wonder how often Truth is going to be fed to Bray Wyatt. At Wrestlemania, he was fighting for the IC Championship. Now he’s getting sacrificed to Bray. Not that I have anything against people being fed to Bray, I am a firefly and a follower of the buzzards. But sometimes it would be nice to see Wyatt destroy someone he hasn’t destroyed already on numerous occasions.

Bad News Barrett vs the Miz

Miz came out and started doing his thing about he made Mizdow and summer Rae. And then England’s favorite son came out and delivered some bad news. As the Hollywood A Lister took off his sun glasses, Bad News Barrett readied his Bull Hammer. The moment Miz turned around, BOOM! 1, 2, 3 it’s all over folks.

I just laughed. Not much else to do. This was funny and that’s pretty much it. 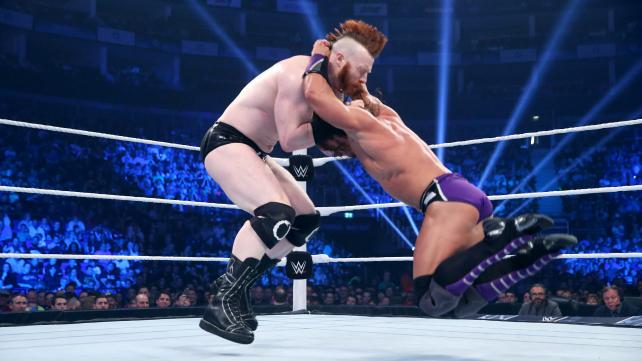 After the assault on Monday night, Neville was looking to get retribution on the Celtic Warrior. He knew he could not compete with Sheamus in size or strength and used his peed and agility to his advantage. Sheamus on the other hand, did his very best to beat the living day lights out of the man that gravity forgot when ever he did get his hands on him, at one point delivering a wicked Irish Curse back breaker. But Neville fought back again and had Sheamus pushed to the very brink where in a fit of frustration, the larger athlete disregarded the rules and used the announce table as a weapon to cause the disqualification.

But as the bell rang, Sheamus made it clear he was not finished. He continued to mercilessly beat Neville until Dolph Ziggler flew to the smaller man’s aid and chased the Irish gladiator away. The Show Off would then call Sheamus back and called bully and that the only way to stop a bully was to confront them. He therefor challenged Sheamus to a match at Extreme Rules, but not just any match, a Kiss Me Arse match!

Everytime Neville is in the ring it’s a magickal moment for the eyes. He is beyond gifted and looks like he can wrestle against anyone and shine bright. I have never seen him have a bad match. Thought it a bit humorous that Sheamus used Neville being English as a reason to not like him, no reason in particular other than it just made me giggle for a second. Sheamus though is perhaps one of the more physical competitors in the ring. It does not look at all like a picnic to be in a match with him. Pretty sure I loved the entire segment as to cap it off the WWE Universe gets an appearance from the Zig Man and we get to find out that Sheamus will be taking on Dolph at Extreme Rules. If anyone can make Dolph look good the way I like Dolph, it is most definitely Sheamus. 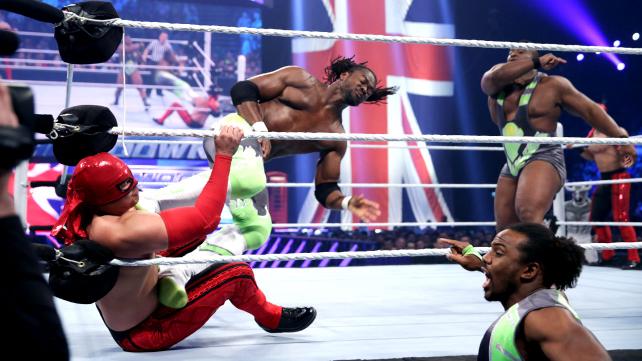 The New Day vs Los Matadores

Nothing major happened in this match other than holy crap the New Day picked up a win! Both teams used good team work but ultimately it was the New Day that came out on top. Coolest moment was an El Torito hurricanrana on to Xavier Woods.

This was probably one of the only times I was actually cheering for the New Day. Why? That’s how much I really don’t like Los Matadores. Though the more the New Day ventures on to my side of things, the more interesting they become. And can I just say, Xavier Woods just looks so adaorable when he hears those “New Day Sucks” chants. So Angry and hurt. I just want to chant it louder just to awww at his pain. 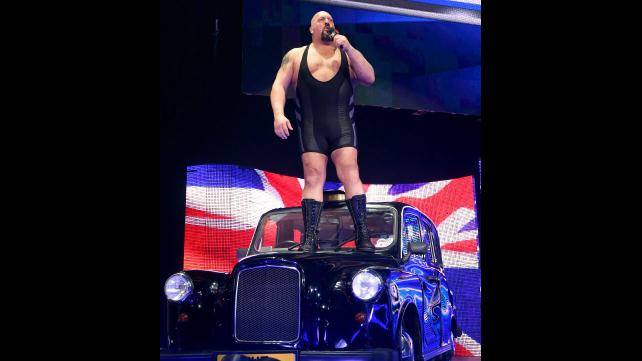 So earlier in the night we found out that the Big Show wanted to address the WWE Universe and explain why he did what he did to Roman on Monday night. (Uh Show… we all KNOW why you did it man.) But nonetheless he came out and described in detail what he did to Reigns and pointed out on the little black cab, and then showed video of it as if we were all just really slow and didn’t understand a word he said. Then he finally got to his point and said that he had requested and been granted a Last Man Standing match at Extreme Rules against the Samoan Superman.

*Groans* WHY?! I do not get it. I just don’t. The point of a last man standing match is to beat the living crap out of your opponent till he can’t get up before a count of 10. With anyone else paired with Roman, this would have been a potentially amazing match. Against the Big Show it’s going to be the slowest most uneventful match on the card. I hope they prove me wrong, because i have a feeling that match will be like watching paint dry.

Cameron vs Natalya vs Alicia Fox

Cameron, Nattie, and Alicia Fox all took it to one another in an effort to bring some closure to the events that transpired last week on Smackdown. All three lady’s were very physical and there was more than one near fall. But I’m gonna give props where it is due. The superplex powerbomb thing was awesome to see from these three ladies. Give Divas a chance indeed. But it was Cameron who picked up the win over the other two Divas.

Gotta say did not see Cameron getting the win as an option. She was definitely the under dog in this match against the more well established Foxy and Nattie. This match was better than I gave it credit for being initially. When the bell rang i only watched with an idle OMG I have to watch this. But as it continued it became a story I enjoyed watching unfold in the squared circle. Must be the blue lights of Smackdown. It seems to have that effect on Diva’s matches. 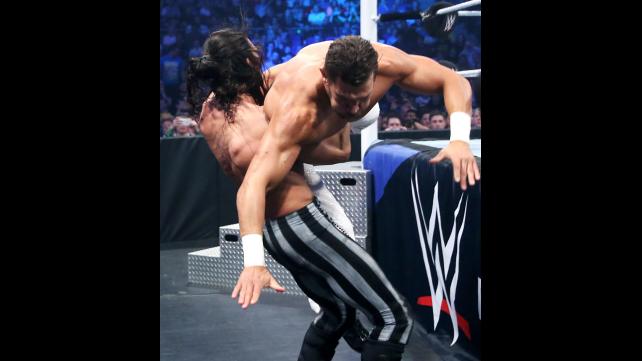 Just before the match, Fandango officially broke up with Rosa Mendes. Wouldn’t have been too big a deal, but it later came into play. The match itself was a short meh piece of work with the biggest high light being Fandango launching himself over the top rope onto Adam Rose. The win came for WWE;s resident ball room dancer when Rosa rushed the ring in an attempt to talk some sense into her former dance partner. This distracted Rose enough that Fandango was able to roll him up for the win.

Some how WWE has made Fandango interesting to me. This is the first time he has ever blipped on my radar as anything other than a jobber. And what is up with Adam Rose’s pants? Did he steal them from Beetlejuice?

It was an All Champion tag team match for the Main Event. The Tag Team Champions held control early as they cut the ring in half and used their superior abilities to keep John Cena from tagging in Daniel Bryan. At some points it almost felt like a handicap match as Tyson Kidd would fly in like a little ninja to get in a cheap shot or break up a pin attempt. Cesaro used his impressive strength to keep the United States champion where he wanted him as well. but Cena was eventually able to tag in D-Bry who then took the fight right back to the champions bringing the pace to a frenzy. But as Natalya attempted to cause a distraction by climbing on the apron. Tyson was knocked into her and she was thrown into Cesaro who caught her. But goat boy used that distraction to Lock in the Yes Lock and Tyson tapped before Cesaro could drop Nattie to break the submission.

This was just a fun match. Cena of course didn’t carry his weight and left Bryan to do all the really difficult work, like say, beat the tag team champions. So just being funny on this, does this mean Daniel Bryan and John Cena are now in line for a run at the tag team titles? Greedy bastids. The gold they have doesn’t seem to be enough. But back to the match. All involved worked very well together and it was jut an entertaining match but nothing too spectacular.