This week, the WWE gave the NXT Universe a behind the scenes look into Hideo Itami’s journey to the Andre the Giant Memorial Battle Royal at Wrestlemania, where he represented his fellow NXT Superstars in the prestigious match in front of over 76,000 members of the WWE Universe. It chronicled the tournament that led him to his spot in a match on the Show of Shows and the moments before and after his life changing experience in the match. Take a journey with Japan’s greatest export on this hard hitting, yet incredibly emotional installment of NXT (which can be seen on the WWE Network free in the month of April to new subscribers.)

In the opening moments of the show, the NXT Universe learned that we would get to see the semi finals and finals of the tournament that would land Hideo Itami in the Andre the Giant Memorial Battle Royal. The opening brackets saw the angry Japanese man destroy Jason Jordan, Neville own Kalisto, Finn Balor devour Baron Corbin, and Tyler Breeze send Bull Dempsey packing. With the field cut in half, our night began with: 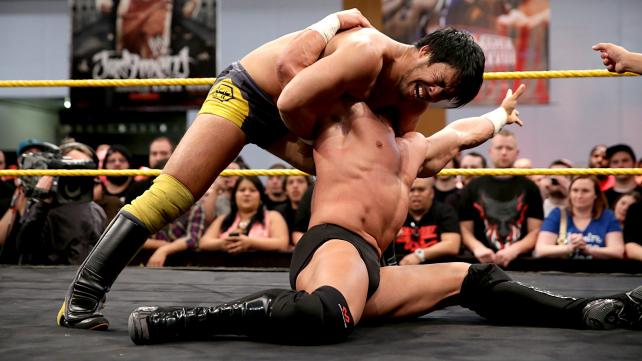 This match was everything we wanted it to be in more. It started slow and both competitors felt one another out with various holds and counters. It didn’t start getting heated till Hideo began to use his signature kicks against the former NXT Champion. At that point, Neville, who had been kicked to the outside, used the 10 count to his advantage to regroup and rethink on how to attempt to best the Japanese sensation. Neville took control and kept his offense mat based for the most part. But Hideo battled back with his fierce strikes and teased the GTS but the man the gravity forgot was able to wriggle out of it, but to no avail. Hideo drop kicked Neville into next week to pick up the win and advance to the finals of the tournament. 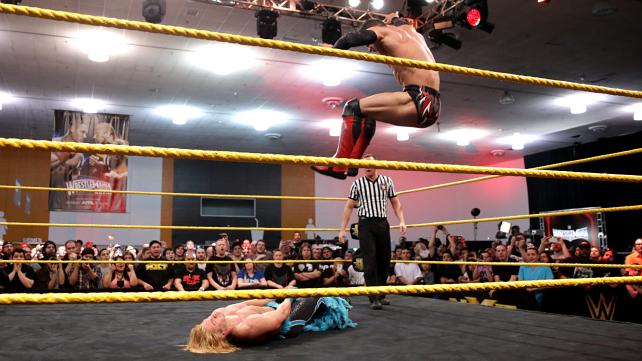 Tyler Breeze appeared to be unimpressed with the mind game of an elaborate entrance that has become a Finn Balor signature. However Prince Pretty seemed a bit hesitant to lock up with the Irish demon as the bell rang. But Breeze then turned it around and took control and kept Finn grounded with various submissions. Their match continued to heat up as Balor battled back and even landed a gorgeous sling blade neck breaker to take control. He clenched his spot in the finals when he sent Tyler crashing into the turnbuckle which set him up for the coup de grace.

The finals of the tournament between Hideo Itami and Finn Balor could easily take match of the year. These former tag team partners and best friends put on a wrestling clinic with their knowledge of mat wrestling, counters, holds, high risk maneuvers. It showed how well they knew one another as through out the match neither gained the upper hand for long before the other would counter or reverse and have his opponent on the defensive. The split NXT Universe could only watch in awe and amazement at the brilliance of a match that took place between the Irish demon and the angry Japanese man. There was no quit in Itami as he took blow after blow dished out by Balor and his fighting spirit shown through as he avoided the dreaded Coup de Grace and kicked out of many pin attempts. Twice the GTS was teased and twice it was avoided. Corner drop kicks were delivered and yet both men continued to fight for the chance to represent NXT at Wrestlemania. In the end it was Hideo Itami and his running drop kick that earned him a place in the Showcase of the Immortals. Hideo celebrated his success and Finn congratulated his friend as only BFFs can.

All three of these matches were excellent and words will never be able to do them justice. It was some of the BEST wrestling that has been on WWE programming to date, main roster to NXT roster. The episode further went on to show Hideo’s backstage congrats from different WWE superstars and Hideo’s family as well. We got to see snippets of the Battle Royal and Hideo’s elimination. But best of all we got to see how humble Itami is and how much he loves the business that he has devoted his life to. This episode was a treat for any wrestling fan.