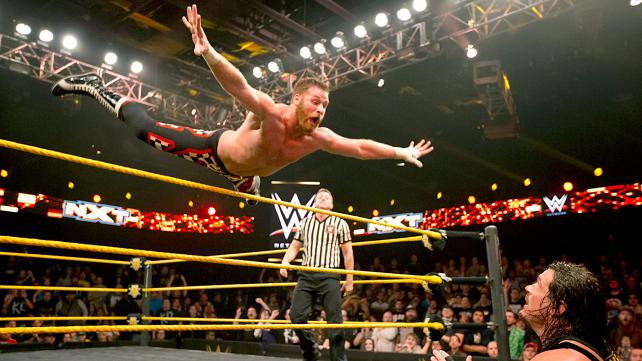 WWE‘s unofficial second brand, NXT (which can be seen on the WWE Network for the month of April FREE to new subscribers) never fails to impress. The highlight of any Wednesday killed it again this week as the resident Hacker took on the angry Hippie, the tag team division tore down the house, the highly anticipated debut of Dana Brooke, and the number one contendership for Kevin Owens’ NXT Championship was solidified. The NXT Universe once again witnessed the high impact wrestling that they have come to expect from NXT. Find Out Now what happened!! 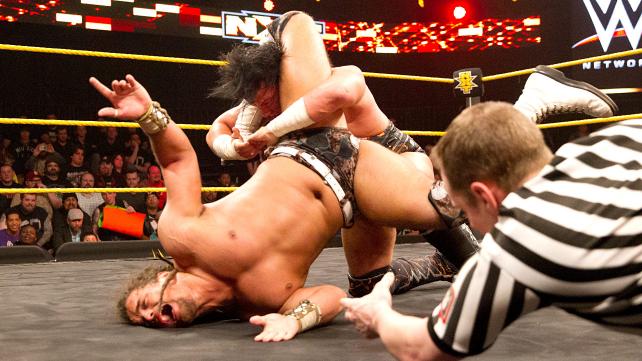 Ever since he tried to take over NXT, CJ Parker has had his issues with Solomon Crowe. It came to ahead when the two locked up in a one on one match. It was a pretty good back and forth battle but Crowe had the edge over NXT’s resident angry hippie. The two did land some impressive wrestling maneuvers such as the Hackers wicked clothesline from the corner that knocked CJ to the floor, which he then followed up with a suicide dive onto his floored foe. The end came shortly after that for Parker when Solomon body splashed his leg from the top rope and then locked in a stretch muffler to gain the submission victory over the eco-warrior.

Oh I do so love to see Solomon Crowe wrestle. His look and his eccentric nature make him a feast for the eyes because his style is so frantic, one never really knows what he’s going to do next. CJ Parker is fun too but his style is a bit more clean than Crowe’s.  More technical. it was a shame to see him take another loss as talented as he is, but NXT’s hacker does seem to have a habit of disrupting plans. Look forward to seeing more from Solomon. But unfortunately, the NXT Universe will not see too much more of CJ Parker on NXT, as he and the WWE have parted ways. It was an amicable split so we may see the hippie back on in the future, just not the near future. 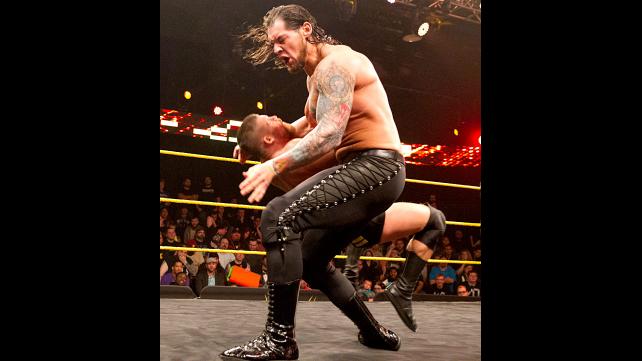 LOLBaronCorbinWins. Not much to say but Steve Cutler didn’t stand a chance as he lasted less than 30 seconds. I think the NXT crowd may have counted to 27? But it pretty much was, a clothesline, throw into the ropes, caught for an End of Days and NXT’s Lone Wolf picks up yet another win.

Ok, so I am so over the 30 second matches. Baron is better than this. Please put him in matches where he gets to do more than his finisher. But not Bull Dempsey, been there done that, over it too.

In an effort to continue to put themselves on the road to a tag team title match, Enzo and Cass found themselves in contest with Angelo Dawkins and Sawyer Fulton. The latter team took control of Enzo early on as they used their strength and skills against the certified G. The team work displayed between the collegiate trained duo definitely puts them on the tag team divisions radar as possible contenders for the NXT tag Team titles in the future. However, Enzo was able to make the much needed tag to Big Cass and that’s where the momentum shifted to the Realest Guys in the Room. It was all over for Angelo and Sawyer when Colin hit his East River Crossing and then tossed Enzo onto their opponent for the win.

It is nice to see new blood in the NXT tag team division. The team of Angelo and Sawyer show great potential as potential front runners. They still look a bit green in the ring but nothing a few more matches won’t shake off. I loved their team moves. Inventive and just fun. Don’t think it would work too well on larger opponents, but hey, they have plenty of time to show me otherwise. Cass and Enzo were on fire tonight. Though not a fan of Amore looking like the weaker member. Sure he doesn’t have the size or strength of Big Cass, but he does have speed and agility on his side. They need to make him look strong as well if they are to make a serious grab for the NXT Tag Team Championships. 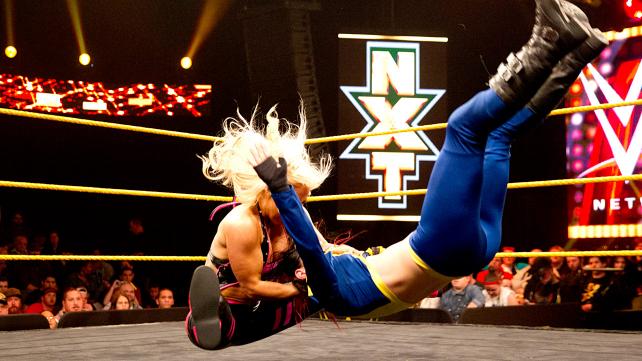 At long last the NXT Universe got to witness the in ring debut of Dana Brooke. The former fitness model wasted no time in taking control of her opponent, Blue Pants (can she please get a real name? I mean her shirt is blue too). It wasn’t a squash match, but Brooke handled every fired up comeback from Blue Pants like a pro. The “Total Diva” showed us her impressive strength as she hoisted Bluey over her shoulders and swung her around for an impressive slam to pick up the 1, 2, 3.

Since it was two relatively new divas, Imma give this one a pass. It wasn’t as smooth as it should have been, but hey this technically is developmental right? Both women were good in the ring, but they lacked the chemistry to really make this match into something more than it was. I will give Dana huge props for trash talking throughout the match. That did elevate it from a meh match to moderately entertaining. I do look forward to seeing what else Miss Brooke has to offer in the future.

Oh sweet Wrestling Gods, what have you gifted me this week? Sami Zayn made his in ring return against the Man Beast, Rhyno. There was question on whether Sami was up to the task, but if he wanted to retain his #1 contendership to the NXT Championship, he had to defeat the man bound and determined to gore his way to the top. Rhyno wasted no time displaying his strength as he easily over powered Zayn and forced the former NXT champion to regroup on the outside.

The former ECW champion held on to his advantage for the majority of the match as he did his best to cut Sami in half by rammining his shoulder into Sami’s gut as he was pinned in the corner. Sami used his speed and agility to figt back but on more than one occasion was shut down and brought to the brink. At times during the match the NXT Universe had to wonder if Zayn had what it took to take out the Man Beast. But Zayn showed that not only did he have what it took but that he had more ring presence than he should have after taking the beating that he had as he dodged a Gore attempt and followed it up with a Helluva Kick to Rhyno to pick up the win and secure his position as the #1 contender for Kevin Owens’ NXT Championship.

As much fun as this match was, I do so wish that the Sami Zayn matches weren’t getting predictable. He get’s his ass beat, can barely fight back and then boom he feeds off the NXT crowd and yay celebrate Sami wins! I want to see more matches like the ones he had with Adrian Neville or Tyler Breeze. I get it, Rhyno has strength and size on him, so does Kevin Owens. But Sami has speed and agility on his side and he should know he’s not gonna be able to go blow for blow with someone clearly stronger than he is. But hey, he’s still #1 contender so I suppose all is right in the world.