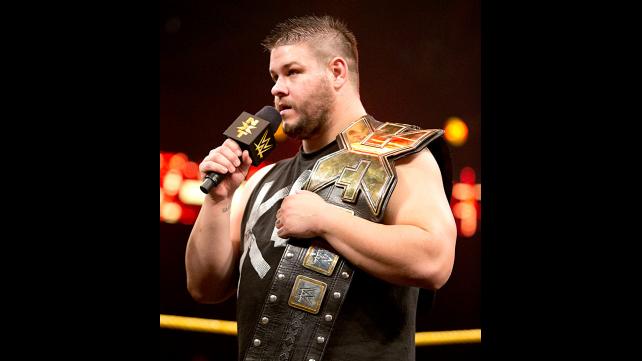 Just one week after NXT TakeOver: Rival, the superstars of NXT return to business as usual on this weeks installment of NXT which can be seen exclusively on the WWE Network. We were promised last week that things would continue to heat up this week and boy did they! Both new Champions were in non title action and the NXT Universe saw the unexpected return of a Superstar and the debut of hotly anticipated NXT Superstar. Find out now how this exciting evening transpired and who came out on top!

The new NXT Champion, Kevin Owens proudly made his way to the ring carrying his hard fought for NXT Championship title.  He took up a microphone and addressed the NXT Universe. Apparently there were people who had issue with how he won the title. The controversy being, that he neither pinned nor submitted the champion, Sami Zayn (no he beat the living day lights out of him and the ref felt it merciful to stop the match.) Kevin reiterated what he had been saying since day one. That he would fight anyone and everyone in order to make a good life for his family, and that the Title, regardless of who he beat and how he beat them, meant a good life for his family. Sami Zayn, Owens continued, was now in the past. And the future was Finn Balor. All the #1 contender need do was go to NXT General manager, William Regal, and pick a date and Owens would be there. He would be there to give Balor a beating reminiscent of what he had done to Sami Zayn at Rival, because no one would be able to take the NXT Championship from his family. 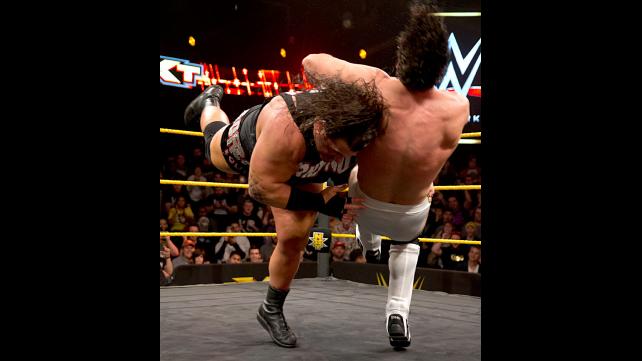 The NXT Universe got a surprise as Superstar RHYNO!! came back at this weeks NXT. The Man Beat was fired up as he quickly made his way t the ring amdist chants of “GORE.” His opponent, Elias Samson, didn’t stand a chance. It was a short match that saw Rhyno destroy Samson by hitting him with a belly-to-belly suplex that set him up for the GORE! (I could hear Paul Heyman in my head screaming “GORE GORE GORE!!”) And Rhyno picked up with quick but powerful win in his return to a WWE ring.

Can I just take a minute to process this? Holy crap it’s mother f*ckin RHYNO! What’s he doing on NXT? How awesome is that!? Okay… Marking out HARD here. I loved Rhyno back in the day. I want to see him and Roman go Gore vs Spear. As much as I love Roman, I’d have to give it to Rhyno. He’s a BEAST! And even though it’s been a decade since he was in a WWE ring, he looked just as good now as he did then. 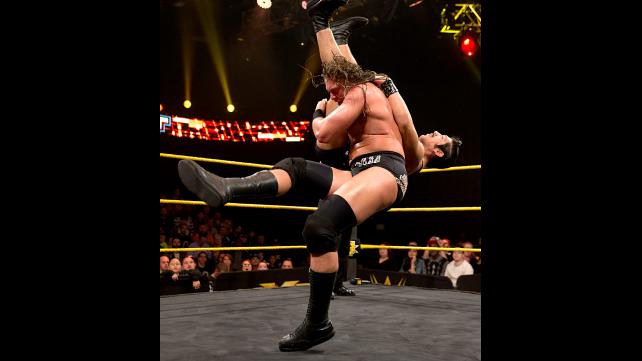 Bada Bing Bada Boom it’s the Realest Guys in the Room! Enzo Amore and Collin Cassidy took on the Vaudevillians. Both teams were looking to make an example of the other to put themselves in the hunt for the NXT Tag Team Titles. Enzo started out hot and built momentum, but a cheap shot From English halted it and put control of the match in the hands of the Manliest duo in NXT. It seemed bleak for Amore as excellent team work between Gotch and English cut the ring in half. Enzo was able to fight back, create a slight separation and dove to tag in his partner, Big Cass.

The 7 footer exploded into the ring and took out both Aiden and Simon. There was no stopping this Cass as he used his size and power to take control of the match. Enzo and Cass demonstrated excellent team work of their own as a quick tag, a double team and a big boot allowed Amore to pick up the win for his team. After the match, the NXT Tag Team Champions appeared on the screen to address the victors of the match. Blake and Murphy offered Carmella a spot with them if she wanted to be with “real champions.” She promptly looked like she was about to vomit.

This match was entertaining. Both teams work well together, and I mean that as facing one another, as well as have great communication as team mates. Both had great double team moves and the action never let up. Would love to see more of Big Cass in the ring. He’s 7 ft and moves like a smaller big guy. Don’t ask me to explain just think of how Kane and Big Show moved round back in the Attitude Ear. It’s not slow or lumbering. All men though are exciting to watch in the ring. 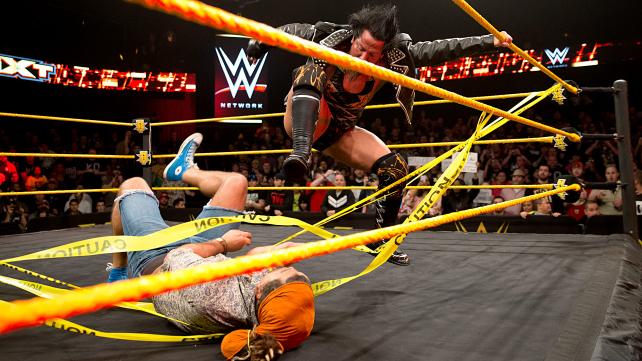 NXT’s resident angry hippie was, surprise! ANGRY! And he had every right to be. This past NXT Takeover live special, did not feature him in any way. CJ Parker was more than a little miffed at the disrespect that he had been shown and he was NOT going to stand for it any longer. To protest his mistreatment, the Eco Warrior began to tape off the ring with yellow caution tape, effectively, taking over the NXT broadcast. As he worked, the broadcast itself became hacked and the screen flashed “This is Not a Test.” BOOM! Solomon Crowe burst into the ring from out of no where and lays waste to CJ Parker. As the hippie lay tangled in his own caution tape, Crowe took up the microphone and returned us to our regularly scheduled broadcast.

*FAN GIRL SQUEE/HAPPY GLITTERY FAIRY DANCE* Solomon F’n Crowe man!! Okay, poor CJ parker was fodder for the NXT debuts even though he has valid points kinda sucks. But it is all worth it to FINALLY have Crowe on the NXT program. Don’t know who he is? You can get a feel for what he can do if you google, Sami Callihan. Oh you may find another familiar face in your search and then have your brain explode with possibilities. I’m just friggin tickled pink. #CawCaw! 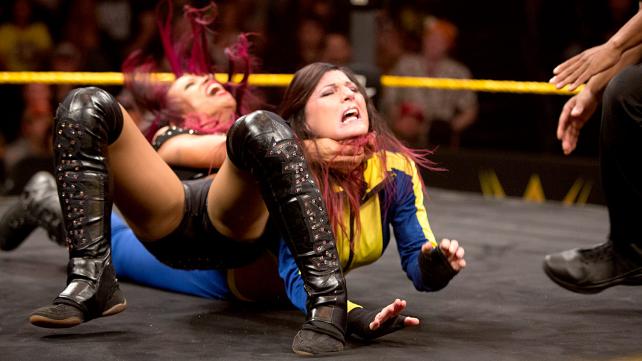 One week after winning the NXT Women’s Championship, Sasha Banks found herself in one on one action against the chick simply known as Blue Pants. No one can ever say that the Boss didn’t try and let the enthusiastic newblet off the hook, but Blue Pants only threw Banks’ kindness in her face by knocking her out of the ring. Sasha then showed why she was not to be trifled with as she pummeled Blue Pants and hit her with a double knees in the corner and then made the poor girl tap out with a Bank Statement. And that is why Sasha Banks is the Baddest Diva in NXT.

Seemed a little out of left field to see a newly crowned champion go up against someone we simply know by the color of her pants. Sure Blue pants is a good wrestler (I suppose… Only seen her against Carmella.) but Sasha handled the insult “challenge.” The Boss made it look easy the way she dismantled Blue Pants and then made the girl tap out. As far as the match itself goes… It wasn’t as high intensity as other NXT women’s matches. But then again, I suppose it would be easy to burn out if some of the matches were that intense all the time. But then again, by main roster Diva’s match standards, this match still would blow them out of the water. I <3 NXT Women’s Division. 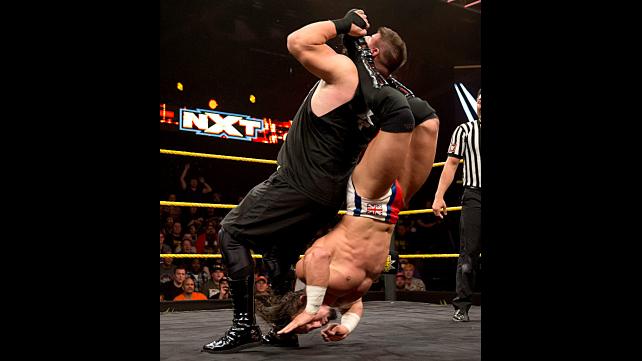 The fact that this was a non title match did not detract from the importance of this match for Adrian Neville. He sought redemption for when he was sent to the hospital after the viscous beating he received from his last meeting with Kevin Owens. Adrian was fired up and took the fight straight to the NXT champion. A series of hard hitting kicks but Owens countered with a brutal gut buster that brought the Man that Gravity Forgot’s offensive momentum to a halt. KO continued to beat down Neville in a way that was reminecent of the beat down tat Sami Zayn received. But Adrian perceived the onslaught and drop kicked Owens to the outside.

To cement his control of the match, Neville preformed a 450 splash on to his floored opponent.  He further held onto his control with huge German suplexes. But Owens would not stay down as he reacted seemingly on instinct to keep a bit of separation between he and the pissed of Englishman. Adrian got a near fall after he spike DDTed the NXT Champions head into the mat. Neville then went for the red arrow but Kevin Owens countered into a powerbomb for the win.

This match was insane. the intensity of this match was off the chart. The in ring chemistry between Neville and Owens is electric. They were both impressive in their offense, vicious and merciless. Both showed they have insane resilience as they weathered the other’s attacks and countered one another. This was an A+ match if I ever saw one. Kevin Owens dominated but Adrian help his own. It was brutal and oh so enjoyable. Yep, I’m totally on a wrestling high after this match. By beating Neville, a former NXT Champion in this fashion, Kevin silences those who would take issue with him holding the NXT Championship.