I was I had better news, but unfortunately I do not. One of the finer actors and human beings has passed away today. That man is Leonard Nimoy, or most famously known as the original Spock from the planet Vulcan on ‘Star Trek‘. I grew up watching Nimoy as Spock in the ‘Star Trek‘ films and tv series and always thought he handled each situation with a cool head and was just a cool guy.

Nimoy also wrote and directed a couple of the ‘Star Trek‘ films. He had notable appearances on ‘The Simpsons‘ and most recently the hit sci-fi tv show ‘Fringe‘. He also had a love for women of all shapes and sizes and released a photography book, showing his photography work of nude women of a bigger size. He released a couple of albums in his younger years a s he was a fan of music, and he served as a sergeant in the United States Army in the 1950s.

But I will always remember him as Spock, the logical and level headed side of Captain Kirk, who shaped the USS Enterprise to what it was. His wife, Susan Bay Nimoy, confirmed his death, saying the cause was end-stage chronic obstructive pulmonary disease. We will miss you and you for sure will forever Live Long and Prosper! 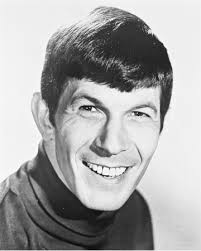