Disney’s ‘Into The Woods’ Coming To Multiple Digital and Disc Formats!!! 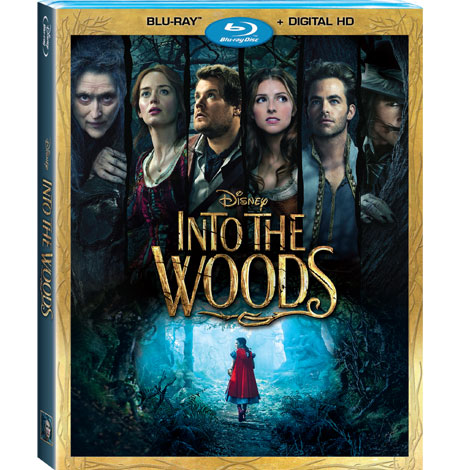 Disney has done it again, they’ve taken a popular musical and put it on screen. There are all kinds of takes on how well the film did, the casting choices and even the songs (Hello? Didn’t anyone see the original show before?), not to mention the flack over the prolific double entendres uttered by Johnny Depp’s Big Bad Wolf to Lilla Crawford’s Red Riding Hood, once again, did you NOT see the original people? I loved it, one of the high points is Meryl Streep as the witch. Meryl is flawless regardless her role. Now the Blu-ray is coming on March 24, 2015!!!

‘Into the Woods‘ is a modern twist on the beloved Brothers Grimm fairy tales in a musical format that follows the classic tales of Cinderella, Little Red Riding Hood, Jack and the Beanstalk, and Rapunzel-all tied together by an original story involving a baker and his wife, their wish to begin a family and their interaction with the witch who has put a curse on them. It’s a great story that crosses each character in a fascinating way. Rob Marshall (‘Chicago‘) directed an absolute all-star cast consisting of Queen Meryl, Anna Kendrick, James Corden, Emily Blunt, Christine Baranski, Tracey Ullman, Johnny Depp and Chris Pine among many others.

In March, we have the opportunity to buy the film on several formats, Blu-ray Combo Pack, Digital HD and Disney Movies Anywhere, DVD and On-Demand. Bonus materials for the release include an exclusive, never-before-seen original song “She’ll Be Back” performed by Meryl Streep with music by Stephen Sondheim and lyrics by James Lapine.

EXTRAS INCLUDE:
· Never-Before-Seen Sondheim Original Song: “She’ll Be Back”
Meryl Streep performs a compelling new song that sheds a little more light on the Witch’s relationship with Rapunzel. This never-before- seen composition was penned especially for this movie by Stephen Sondheim and James Lapine, and is seen here exclusively on Blu-ray and EHV. With introduction by Director Rob Marshall.
· There’s Something About The Woods
Journey into this mysterious forest to discover how this compelling, new musical was made. Meet Director Rob Marshall and his award-winning team of artists and craftspeople, see how the woods were brought to life…and what they represent to the story…and to all of us.
· The Cast As Good As Gold
Emily Blunt. Anna Kendrick. Chris Pine. James Corden. Johnny Depp. Meryl Streep. Meet the remarkable cast of this musical movie, and hear of their affinity for this Broadway classic.
· Deeper Into The Woods
Journey even further into the development of the film in these 4 segments
– From Stage To Screen
– Magic of the Woods
– Designing the Woods
– The Costumes of the Woods
· Filmmaker Commentary
Film commentary with Director Rob Marshall and Producer John DeLuca.
· Music & Lyrics
Get direct access to the musical song segments from the film, with optional sing-along lyrics.
· 5 Golden Eggs (Easter Eggs)
*Digital bonus offerings may vary by retailer

DVD:
· Deeper Into The Woods
-Magic of the Woods