As a fangirl, I love comics and dressing up. I love being someone else for one day and let’s not lie, Comic Con is my mother ship. This weekend was no exception. I spent two days basking the glory and adoration that was formerly Sci-Fi Expo and is now Fan Days 2.0! It’s my family, and walking through the doors of the Irving Convention Center is always like being at home. It is very much like a space ship or the Sandcrawler from ‘Star Wars’, with its four levels, an over powering awning, and yet, when the parking attendant took mine and Taylor’s (lead camera) money, we were excited and ready to get out of the car and start mingling with everyone and see what Fan Days 2015 had to offer. I decided to go ahead and dress up, because hey, who doesn’t like it when press looks like someone else? My costume of choice? Totally obscure and amazing! I was ready to go as Special Agent Dale Cooper, from Twin Peaks. I even brought along a thermos of “Damn fine coffee,” and a bag of donuts. Dead Laura Palmer would be waiting for me at the convention, for sure! 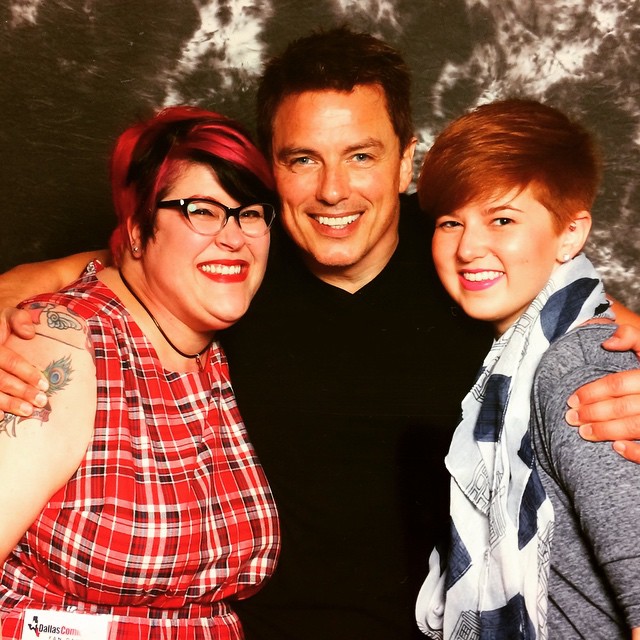 Fan Expo has recently merged with the conventions here in Dallas, providing a larger scale guest list and a new home for May’s convention (the Dallas Convention Center) and it has also created a larger draw of guests. This year’s guest list included big names such as: Stephen Amell, John Ramsey and John Barrowman of Arrow; Melissa McBride of the Walking Dead, and Alex Kingston and Colin Baker of Doctor Who. Other Big names included: Nichele Nichols of Star Trek and Chris Sarandon of the Princess Bride as well! My biggest excitement regarding the guest list was Emma Caulfield of Buffy the Vampire Slayer was coming!!!

The convention center was crowded, and even at 11 AM on Saturday morning the con was PACKED. Our first stop was the fourth floor, just to see if the celebs were available for a “drive by photo.” The lines were already just astronomical, especially for Stephen Amell and John Barrowman, both of Arrow, and also for Melissa McBride, of AMC’s The Walking Dead. I am glad we stopped in, since Barrowman is social media man, and decided to climb on top of his table and take a photo of everyone in line, as well as dance and allow people to put dollar bills in his pants. 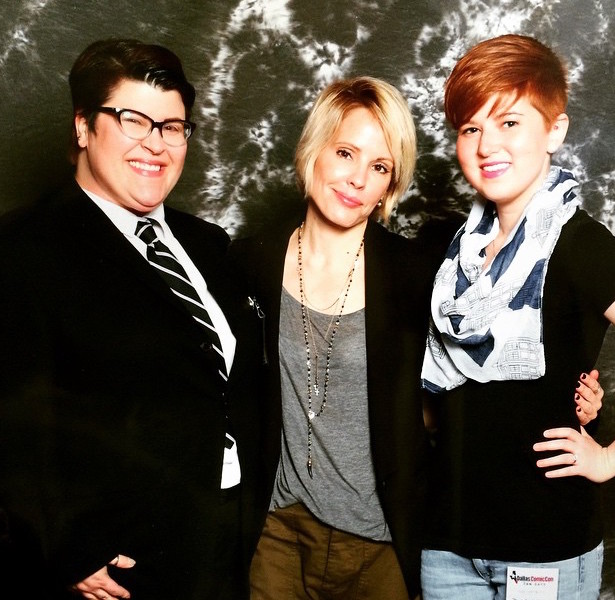 Taylor, my camera man and wing-woman for the weekend, decided right then and there we were getting a Barrowman photo op! We went down to the third floor to get in line for our special celebrity photo op with Buffy cast mate and super adorable Emma Caulfield, and to our surprise, waiting in line we meet cosplayers of the first order. They are Buffy fans: A girl dressed as The Gentlemen ( AMAZING!), a young girl dressed as a Sunnydale cheerleader) and everyone is excited. THIS is what it is about. THIS is what we are all here for! We get to the phot booth, and Emma Caulfield is tiny, and darling, and I am awkward, and dressed like a boy, and smiling from ear to ear. Taylor and I stand on either side, and she hugs us both and after the picture, she points at me, and smiles and says, “I love your Dale Cooper costume. You look great. I wish I could be on the new Twin Peaks.” I fangirl HARD! She LIKES my costume. ME. Jaw drop, day MADE.

You HEAR that David Lynch? Emma Caulfield NEEDS you.

Taylor scoops me up off of the floor and we head back up to four to partake of the John Barrowman Panel Experience. I am glad we do, and even though we stand in line for a hour and half, and even though I only see the 40 minutes of it, it’s the greatest panel (besides Firely) I have ever sat in on. He’s dynamic, and charismatic, and perfect. And he OWNS the audience. Even when a lady who asked him a question kept interrupting him, he was sassy, AND charming, “If you keep interrupting me, I’ll make you sit down.” He is the most perfect con guest ever. He has everyone laughing and you feel like you are seriously best friends with him by the time you are done. 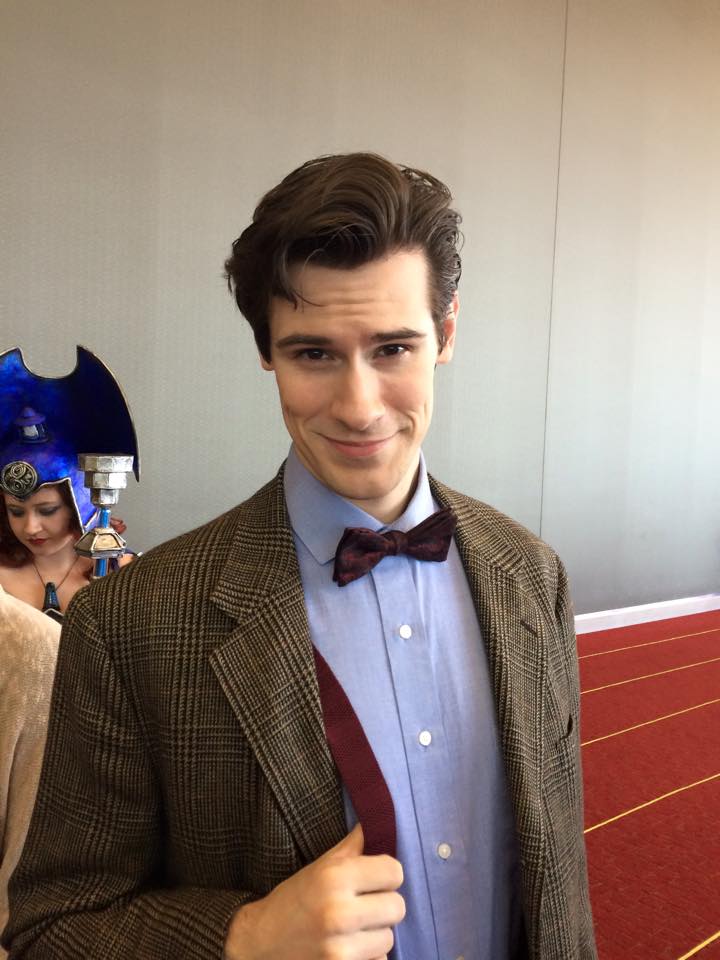 I will tell you, the amount of incredible costumes out this year were incredible! I was so impressed. Taylor and I got so many pictures of the ones we loved and some of the best ones were from the kids 11 and under. Every year DCC has a “cosplay red carpet.” It’s a chance for all the cosplayers to walk and get their picture taken by the press, and for everyone to see what was put together and admire the technical skills it took to build each and every costume. This year, I got to run it.  It was so beautiful and the line went from the edge of the red carpet (near the exhibit hall) and down to front entrance. Everyone wanted to participate!

From Doctor Who to Deadpool to Captain America to Disney, everyone was decked out! People started walking to line up for the red carper around two. I started seeing of the people and had a jaw drop situation. A woman dressed as Captain Marvel, with flame bursts on her hands) was mind blowing! There was also a woman dressed as Jean Grey as Phoenix, and had actual Phoenix attached to the back of her costume, so it looked it was a shadow behind her. It was fantastic! One of the ones that stopped me right when we got there, was a guy dressed as Freddie Mercury from Queen. Genius! Kevin Lewis was there, dressed as Darryl Dixon, fresh off his stint on Fox 4 News, and he was joined by couple dressed at Abraham and Rosita from The Walking Dead. They were authentic and stellar, and such great dedicated cosplayers. We saw them all weekend and they were just awesome. We had SUCH a brilliant time! 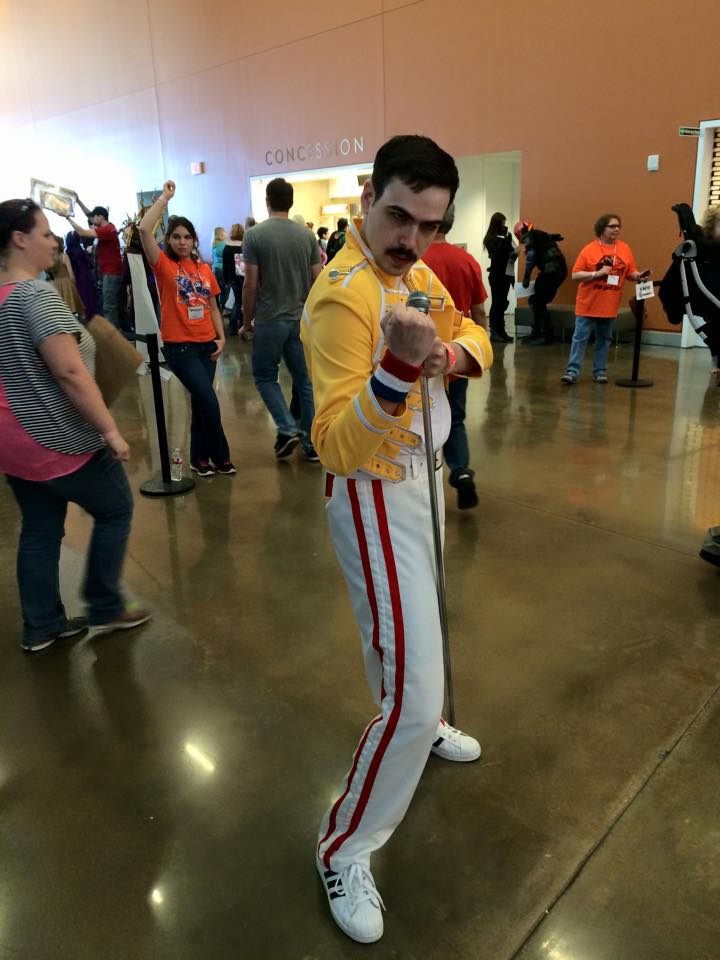 Taylor and I took time to visit the exhibit hall, which is where most of the memorabilia (POP vinyls, tee shirts, Wild Bill’s Soda!) and art is sold and we were amazed at a lot of the talent present. We saw art from Joseph Michael Lisner (Dawn), Cal Slayton (Walking Dead/DC), and Joe Eisma (Image) and my fave- the local faves were there! Michael Champion , Jessica Von Braun (one of my faves), Matt Houk,  and lastly, Devin Kraft.

I bought this killer Alien print, from Devin, and it’s one of kind, since the background is actually green. I spoke a little with Devin and he said that working on this piece was a bit of a fluke, and yet, it came out so perfectly. His printer ran out of red. He also had a sweet little cosplayer named Charlie Williams totally fawn over some of his Studio Ghibli prints. (She was darling, and I will talk more about her in another article!) The fact that she knows what she is talking about and is only seven totally blew his mind! The quality of local art was amazing this year, and we missed some of the other artists who could make it (Matther Warlick and Taylor Lymbery, I am looking at you!) and because there was so many there, we didn’t get a chance to see every one.

We were excited to come back for the next day. To host the kids costume contest, see more costumes, have more fun and do it all again!