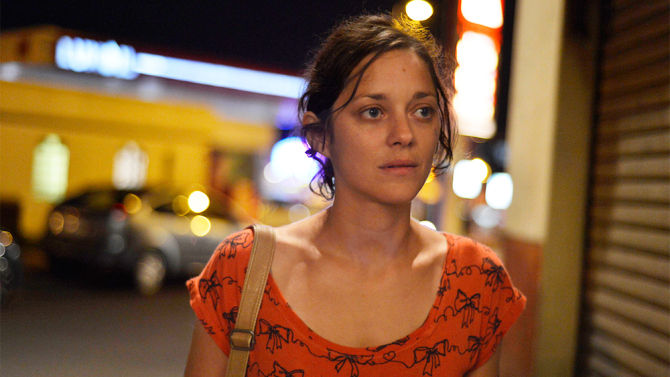 The phrase “train wreck” is tossed around a lot. People love to watch train wrecks in their many forms. This might explain the onslaught of reality television shows that permeate the airwaves. However, these shows are often short lived as people slowly learn the sad truth. The Hollywood version of a train wreck is a fun roller coaster ride with many ups and downs, often resulting in a happy ending. A realistic train wreck, however, is as disturbing to watch as one might expect. Directors who attempt to go down this path must navigate that precarious line to not delve too deep in that grim realism, and instead . Two Days, One Night is certainly not a train wreck of a movie, however, it suffers from a pretty blatant identity crisis due to its shallow glimpse into much deeper ideas.

Two Days, One Night follows Sandra who is played by Marion Cotillard (Inception). Sandra, a young wife and mother, is forced to take time off of work due to a nervous breakdown. Upon her return, she learns that management has offered the other employees a substantial bonus if they will vote to have her job terminated. Of course, the employees vote to raise their own salaries rather than to keep her employed. Sandra and her friend convince management to hold a revote on Monday. This gives Sandra the weekend to try and convince her 16 coworkers to vote in her favor.  As she travels around town, she quickly learns that her employees desperately need their bonuses for a variety of reasons. As sad as they feel for her, they must look out for their own. What follows is an interesting, albeit shallow, look at various human conditions.

The problem with this film is that it doesn’t allow itself to really develop. It attempts gritty realism, but doesn’t commit to the endeavor. The scenario presented to the audience is traumatic. It is a scenario that could realistically happen in certain circumstances. The protagonist suffers from a very realistic depression that further exacerbates her dilemma. As she travels from co-worker to co-worker, her desperation and anxiety are palpable as she slowly unravels. Unfortunately, the film never really takes the time to truly develop this despair beyond a surface level. Only once in the entire film does the audience truly connect with her turmoil and really feel the depths of her depression. However, that scene is short lived and quickly resolved by a clichéd bit of last minute hope-inspiring good news out of nowhere. Perhaps the director felt that delving too deeply into Sandra’s character might bring the film down to depressing depths he was unwilling to travel. Unfortunately, this leaves the audience with a distinct lack of true connection to the character, which hinders any real connection between the film and the viewer. 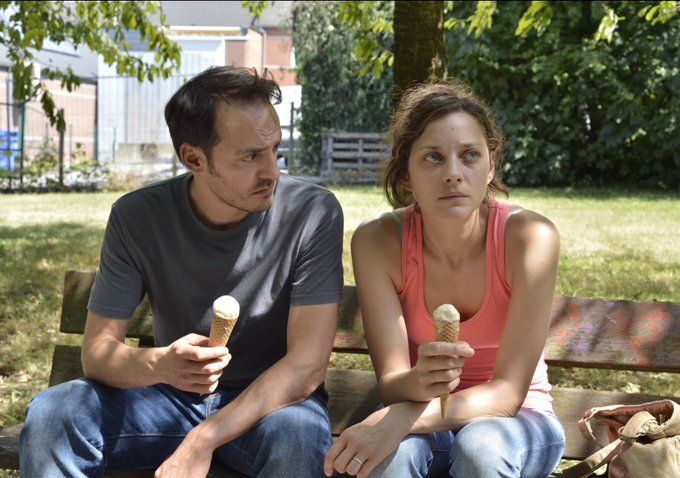 Also missing is any real exposition. The film centers on Sandra and her husband. The characters are beautifully portrayed by Marion Cotillard and Fabrizio Rongione, but lack much depth. To his credit, Fabrizio does a wonderful job portraying the supportive (and infinitely patient) husband and father, Manu, who is just trying to help coax his wife along. Sandra gives up numerous times throughout the film, but he always manages to bring her back with support and determination. You really get a sense of connection between the two characters – a pivotal piece in attempting to make a film like this work.

Still, the film does many things well. The husband and wife duo are portrayed beautifully, and the conflict is compelling enough to keep your interest throughout the film. You never feel the desire to turn away. You will find yourself feeling Sandra’s pain, and watching to see if she succeeds in obtaining the necessary votes to keep her job. However, the film attempts to do too much. In watching, you’ll find yourself drawn to the various characters as each have their own unique tale to tell. The problem is that there are too many storylines to really develop any of them fully. The end result is a film that draws you in just enough to make you care, only to move on to the next tale before you can learn more. Focusing on fewer issues and subplots would have made this film more powerful.

This is a solid film, but it certainly is not the Dardennes’ best effort. It attempts to capture humanity in its various forms, but ends up trying to do too much in too short a span of time. The end result is a good film that had the potential to be a great film. If only they had cut the fat and focused more fully on a few colors rather than trying to paint the entire rainbow spectrum of human nature, this film could have been a contender for film of the year.