A tragedy occurs in China and a computer virus is recognized as the culprit.  The Chinese government immediately called in their cyber security expert, Captain Chen Dawai (Leehom Wang).  In the US, the CIA is working on the cyber attack, too.  Enters Agent Carol Barrett, not Carol Burnett, (the fabulous Viola Davis) which begins the China and US taskforce.  But who sent it?  Captain Dawai knows who will help him find the villain.  His former classmate, Nicholas Hathaway (Chris Hemsworth), is a genius when it comes to code.  Unfortunately, Hathaway was locked up.  Can a deal be struck to catch the bad guy?

Blackhat is Hackers meets Swordfish (a pre-prison release version) meets Tomb Raider: Cradle of Life.  I know that seems like an odd combination.  If you have seen those films and watch Blackhat, you’ll get it.  I loved the fact that subtitles were used when Chinese was spoken.  This is integral to the world taking another step at understanding each other.  I love English and it is easy for me, but I enjoy learning about other cultures.

Chris Hemsworth is definitely one of my favorite actors.  It all started when he knocked me out of my seat as Thor.  God bless Australia!  I had to start scouting out his other works.  I sat through the good, the bad, and the “at least he’s in it.”  Films like Ca$h, The Cabin in the Woods, Snow White and the Huntsman, and Red Dawn.  Loved him in Rush.  Hemsworth’s extended long shots in Blackhat were definitely ok with me.  Don’t get me wrong, there is more to Hemsworth than his looks.  I think has great potential for more than action films.  I just think he needs better writing to work with.  Although, I confess that, in Blackhat, he had moments of mumbling through the dialogue.

Her role was smaller, but often Viola Davis stole the moment (can’t say show, because Hemsworth wouldn’t allow it).  I remember the first time I saw Davis.  She was in an animal print silkish robe in the film Out of Sight.  She blew up, as we all know, in The Help.  I also loved her in Beautiful Creatures.  I look forward to seeing more from her. 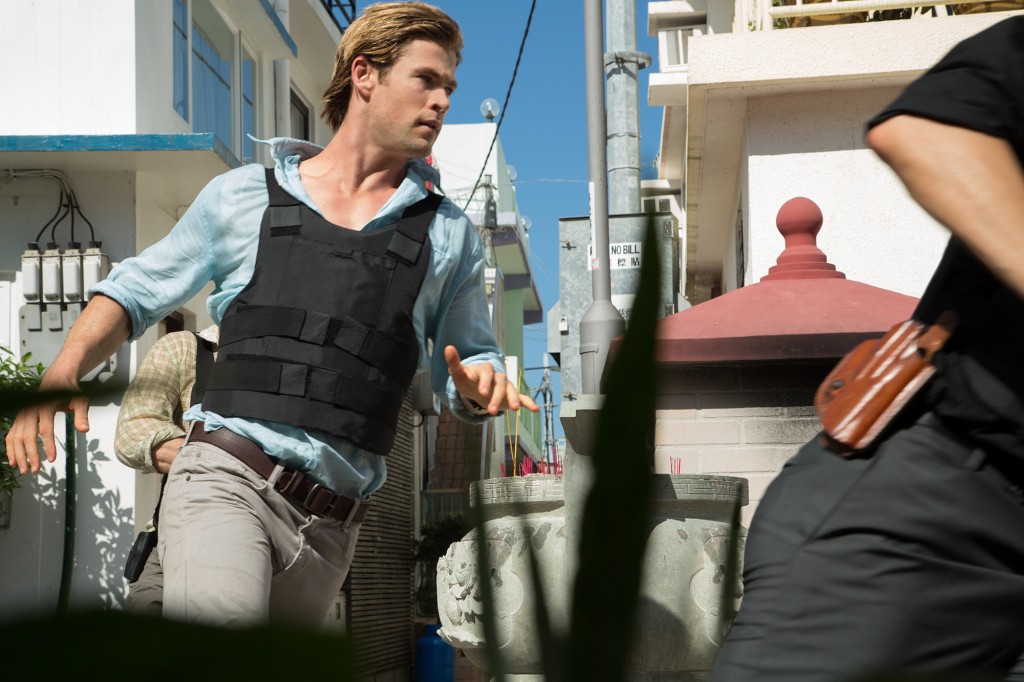 I expected to and wanted to love Blackhat, but I just couldn’t.  Chris Hemsworth is the only reason I was able to endure the 133 minutes.  I strongly believe that Director Michael Mann’s obsession with extreme long shots.  The audience shouldn’t be subjected to the entire launch process of a helicopter.  Also, during the opening sequence of the film (not a spoiler, it was the trailer) and shortly after that, we had to watch a virus transmission from the target’s keystroke through the computer hardware and cables up into the hacker’s cables, computer hardware, and keystroke.  This could have gone faster or it could have been shortened.

A combined trimming of these long shots could have saved the audience 45 mins.  In a different case, the extreme long shot gave away a key plot point.  The film was very predictable.  I have come to understand that this is signature Mann.  Also, Mann was beyond in love with extreme close-ups.  In a fight scene, I was trying to watch Hemsworth kick butt, but all I saw was bodies flying.  The good guys died too easily and the bad guys died hard.  Some parts of the film just didn’t make sense.  The end was not handled well either.  I’ll be more prepared for Mann next time.

(Mann, you can thank Hemsworth for that.)