Once a year, the WWE dedicates one of its shows to the United States Armed Forces. It is a chance for the Superstars to show their gratitude and respect to the men and women who put their lives on the line and make the sacrifices that allow us to enjoy the freedoms that we do. It was a night filled with laughs, excitement, surprise returns and great music provided by Florida Georgia Line.  The evening belonged to the men and women in the US Military. So let’s dive on into the night that World Wrestling Entertainment says THANK YOU to the exceptional men and women who are our heroes!

It was appropriate that a show in an army base would kick off with a BANG as the Immortal and Real American, Hulk Hogan appeared and gave his heartfelt thanks to the brave soldiers that defend our country. And who should appear to accept on behalf of the US Armed forces? Why the Hollywood A Lister who stared in Marine 3, The Miz and his ever present stunt double Damien Mizdow. This interruption did not sit well with the crowd and they appeared to not appreciate his hard work portraying one of them. John Cena interrupted the Miz, much to the delight of the soldiers (and my dismay) and confronted him. The back and forth between Cena and the Miz was more than a little funny. The Miz attempted to cheap shot the leader of the Cenation but ended up being tossed over the top rope leave Mizdow in the ring with the Hulkster and Cena.

Mizdow, ever dedicated to his craft of stunt doubling, threw himself over the top rope landing on the floor to writhe in pain with the star of Marine 3. However, the night was just getting started. Seth Rollins and the valiant remnants of the Authority surrounded the ring and in Shield-esque precision, attacked John and Hogan. Just as I was giggling at the beat down on Cena, Dolph Ziggler with Ryback and Erick Rowan flew down to assist their ally. The remnants of Team Cena drove back the Authority boys and held the ring with Hogan. We would then find out that the main event for the Tribute to the Troops of 2014 would be a HUGE 8 man tag between John Cena and his crew vs Seth Rollins and his crew! 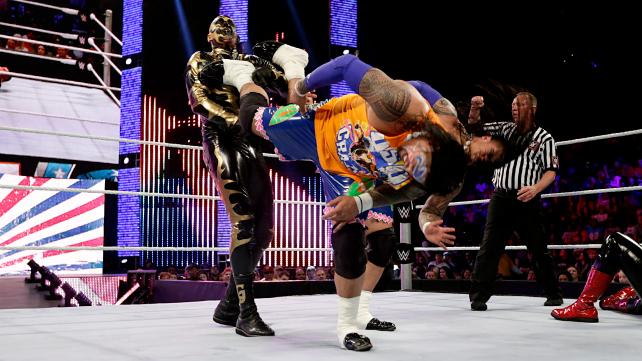 The Usos vs Gold & Stardust

Winner: The Usos via pinfall

Stardust and Goldust coupled with the Usos gave the WWE Universe at Fort Benning an exciting and fast paced match. The battle between the two teams thrilled with the Usos taking control in the early going. But momentum would not stay with them as the Dust brothers were able to double team Jey and keep him from tagging in his twin brother. Eventually, Jimmy would be able to blind tag himself in and mount a huge comeback, much to the delight of the crowd. The Usos were able to hit double splashes and picked up the double pin for the win further cementing why they are the number one contenders to The Miz’s and Mizdow’s Tag Titles. 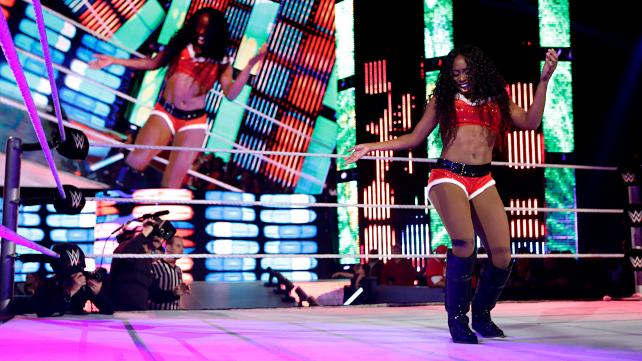 Well if one is going to entertain a crowd of soldiers, what better way than to give them a ring full of scantily clad Divas? If one was expecting technical prowess from this, one was sorely disappointed. But if you just wanted to watch some good diva fun, you got your wish. Normally I’m hard on main roster Diva’s action because it usually bores me to tears (and the NXT Women’s division is just heads and shoulders above it and I’ve become spoiled.)

It was a lot of fun as we were treated to dance offs and the Bellas double teaming everyone to become 2 of the final four in the battle royal. It was Naomi, who was thought to have been eliminated but her feet never touched, who scored the win eliminating Natalya after she was instrumental in eliminating the Bellas. The winner of the battle royal basically gets bragging rights as far as I could tell, but I think Naomi has earned another shot at Nikki’s Diva’s Title. 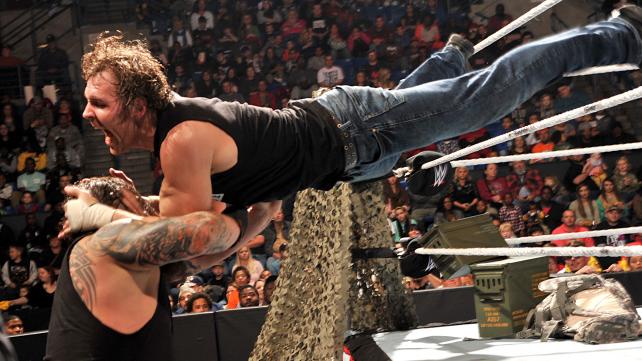 Where else do Dean Ambrose and Bray Wyatt have to go in this rivalry? Seeing as it was Tribute to the Troops, it only seemed appropriate that there be a Boot Camp Match. Wanna know what else was appropriate? WWE Hall of Famer Sgt. Slaughter at ringside. In a rematch of their brutal brawl at TLC (and Stairs), Dean and Bray wasted no time laying into one another. The ring was filled with an array of military gear for them to play with. As JBL said, “only their imagination” would limit them.

Everything from ammo boxes and heavy packs were used to inflict damage on one another. It was all The Lunatic Fringe in the start but Wyatt gained the upper hand with a kendo stick. It looked bleak for Dean, but he was able to gain the momentum and the weapon to show the Eater of Worlds how to wield it properly. But Bray would not stay down as again he gained control putting Ambrose through a table. Not even the Sarge was immune to Wyatt’s wrath and heated words were exchanged before Bray returned to the ring with yet another table. In the roller coaster that was the offense in this match, Dean once again found the where with all to take control once again. The unstable one picked up the win with the assist from Sgt Slaughter’s steel toed boot.

It was a fun match and the soldiers ate it up.   At some points the crowd seemed split in who they were cheering for, Bray has his Fireflies, Dean has his Lunatics. And of course you have me who is a Lunatic Firefly (I told you. I have issues) The thing is, again where can they go from here? Dean picked up the win (FINALY!) Does this means he moves on? Do they keep him feuding with Bray? What more can these two possible feud over now? The rocking chair was avenged and there were no TV monitors involved. As much as I’d love to see these guys on the mic against each other, what is it really they’d be fighting about now? How dark is WWE willing to go in order to keep this rivalry from getting stale? 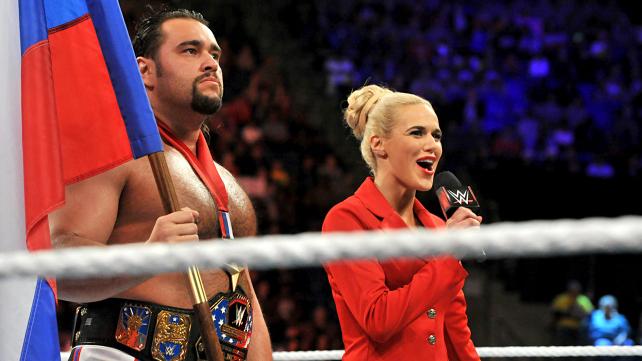 It was nice for the United States Champion, Rusev, with Lana to pay a visit to the troops at Ft Benning. However his message was not well received. Guess the US Military doesn’t think too kindly or the ravishing Russians suggestions. And Rusev’s boast about crushing every American hero put before him nearly had a bunch of soldiers and their families rioting. But HOLY CRAP! IS THAT DANIEL BRYAN?! The leader of the YES! Movement came out and the crowd blew the roof off of the building.

Bryan informed Rusev that Americans don’t back down from a challenge. The Champion challenged Daniel to come down to the ring so he could crush him! Bryan told Rusev that when he challenged him, he challenged all Americans and that “proud Americans can come from anywhere to defend America.” And from anywhere they did, over the rails and down from the rafters, soldiers appeared to accept the Bulgarian’s challenge. Daniel Bryan made his way down, entering the ring. Rusev wanted none of it and strategically regrouped himself back to the locker room leaving Daniel Bryan and the soldiers to celebrate with a YES! Chant that echoed throughout the arena! 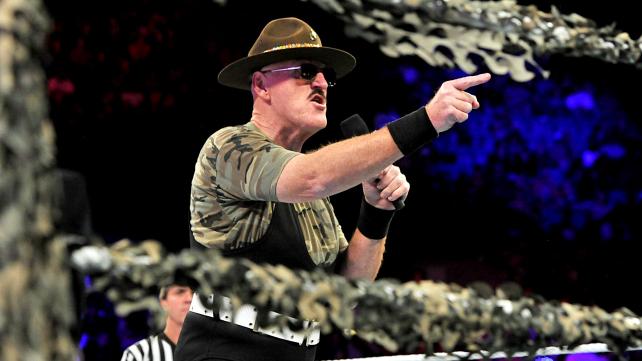 In the match set from earlier in the evenings chaotic opening (see what kinda crazy world we live in without the Authority? Shameful! #BringBackTheAuthority), we get our exciting action packed main event. Seth Rollins, never one to back down from a challenge, began the match with Ryback. Things went from bad to worse for Mr. Money in the Bank as Cena’s team had a game plan (literally, they were studying together just before the match).

Communication and quick tags were the order of the day as they continued to batter down Rollins. But turnabout is fair play, and Dolph Ziggler soon found himself in a similar position. Everything devolved into chaos shortly after as the match became a free for all.  After order was restored by the referee, Rollins’ team was in firm control keeping Dolph from tagging in his partners. Seth, ever one to play psychological games with his opponents, trash talked and mocked the Show Off. The crowd was emphatic of their misguided desire to see Cena in action. Dolph somehow drew strength from this and rallied back to make the tag to the leader of the Cenation. John cena erupted into the match, going on the offensive and taking control of the match. An AA to the Big Show is what earned the win for the team of John Cena, Dolph Ziggler, Ryback, Erick Rowan.

This match was incredible and exciting. Everything fit together beautifully and sent the WWE Universe home happy (most of them anyway… *grumble grumble*).This match was a gift to the men and women of the US Military to enjoy. This is a match where it was hard to find things that didn’t work. Even the Big Show wasn’t able to bring down the speed or energy of this match. Over all, the evening was a good guy kinda night. All the superstars gave the best they could, using their bodies to show their gratitude as they entertained the soldiers at Fort Benning. And the men and women present for the show appeared to be having just as much fun as the Superstars. And so now it is my turn to say a thank you to all the men and woman who have served and are currently serving in the United States Military. Your service is appreciated and cherished!