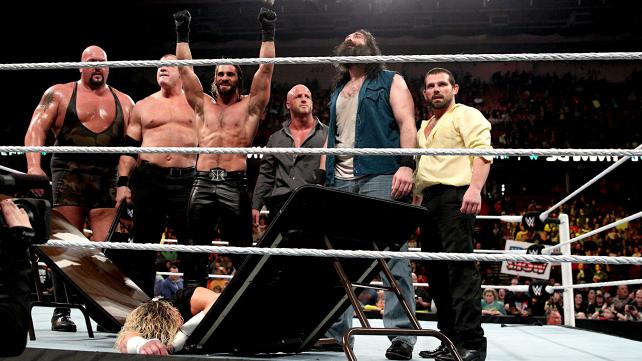 It was a night of pageantry in Greenville, SC as WWE’s RAW was also sharing the spot light with the annual Slammy awards! The WWE Universe spent the weekend voting on their favorites, and all were tuned in to find out who would be taking home the coveted trophy and  witness the go home show for the Tables, Ladders, and Chairs (and Stairs)Pay Per View event this Sunday! It was an exciting night hosted by special guest, Seth Green, filled with excitement and broken tables, so let’s dive on into this week’s show!

First match of the evening sees the living breathing future of the WWE, Mr. Money in the Bank, Seth Rollins vs the man who lucked into a win at Survivor Series for Team Cena, Dolph Ziggler. The match was intense and filled with reversals and counters. Both men giving everything they had to tear the other apart. Dolph dominated for the last half of the match, and kept Rollins on the defensive. I cringed when the Show Off reversed what seemed to be a sunset flip off the top rope into a back body drop to Seth. But they call the top rope high risk for a reason, for the ever present J &J Security interfered, pushed Ziggy off the top rope and that set him up for the perfection that is a Curb Stomp. Seth Rollins nailed it and picked up the win. Now some people would see this as a tainted victory. To you I say, a win is a win, and Seth Rollins will use anything and anyone he can to pick up the victory. How is that wrong? It’s not. Because Seth is a winner, and  Dolph Ziggler just looks pretty knocked out.

It might be my expectations when I hear that Kofi is in a match with Stardust, but this match failed to deliver for me. Two men who are known for their fast passed high flying offense, the match they delivered was slower than it should have been. Stardust, I swear he’s dressed as an energy drink, dominated for most of the match. However, Kofi, drew strength from the crowd chanting for the New Day and was able to hit a Boom Drop and pick up the win over Stardust. I really want to see more of these two in the future. They have the potential to produce some truly spectacular matches. This one, was not one of them, but the potential is definitely there. It looks as if we may get a  rivalry between the New Day and the Bizarre Brothers, so I suppose I will be patient if I must.

NXT Diva’s Champion, Charlotte Flair, finally makes her Raw debut! I cheered like a school girl when she came out for her match against Natalya. I couldn’t help but see this as a Flair vs Hart match. Don’t hate, I didn’t choose the family’s they come from.  Charlotte was bursting with confidence and it came through in her wrestling and her ability to trash talk at the same time. Nattie, however, was no push over. She gave as good as she got. It was a physical and technically based bout that ended in probably the best finish of the night. Natalya went for the Sharpshooter which Charlotte reversed into the Figure 4, which Nattie then reversed into a roll up for the victory. Great match between these women. I wanted to see Charlotte win. I hope there is more between these two, this could potentially be a huge diva’s rivalry that will be more than banshee screaming and hair pulling. 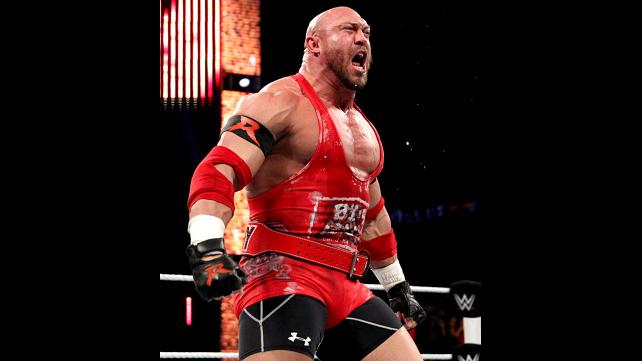 No match here, but that didn’t stop an ass kicking from happening. Wyatt comes down to the ring and explains why he was so heart broken when the Unstable one destroyed the rocking chair. Okay, if you didn’t want it broken why did you bring it to a wrestling ring? On second thought, why am I expecting logic from Bray Wyatt? Moving on… The typical Wyatt speech while riveting and magnetic, was nothing compared to Dean Ambrose interrupting with an Ambulance. Out pops the Lunatic Fringe and he brought tables, ladders, and chairs with him. Chaos ensues and furniture flies. The Eater of worlds retreats and we, the fans are left chomping at the bit for more from these men. I have to give props to Bray though. At one point Ambrose tosses a chair and it landed full force on Bray’s head. Whoops…  but like the bad ass he is, he didn’t let him interfere with what he needed to do. The fight between Dean Ambrose and Bray Wyatt at TLC is probably going to  steal the show. And I’m surprisingly okay with this. Let the battle of the monsters commence!!

This match honestly surprised me. I figure if they were gonna make a rivalry of these two that it would be something with more build up. But then again, one could argue these two shouldn’t be fighting at all given that they were both members of the Wyatt family. Wonder what brother Bray would say if he could see his two boys at each other’s throats? The match itself was a surprise. Usually when two big men are facing off, the match is slow and frankly a bit dull. This was not the case. Both pulled out moves one typically doesn’t see men of their size do. And can I say, Luke Harper is an agile swamp rat. Though, the crazy eyed man got himself disqualified, so Big Red picked up the win. I want to see these two go at it again. I would LOVE a no DQ match. Anyone else with me on this?

Isn’t it great how the US title is held by a Bulgarian that resides in Moscow? I mean what better way to show the opportunities one can achieve in this great country by having an anti American US champion. Let’s hear it for freedom of speech! Of course Jack Swagger came out and assaulted Rusev, but no one is batting an eye lash about it. Double standards, man double standards. Wonder how the man who has never been pinned or submitted will answer this unwarranted attack? Their match for the US title at TLC promises to be intense. But here’s the thing, Rusev has beaten Swagger on more than one occasion. Does anyone truly believe that Jack stands a chance after he’s already shown he can’t beat Rusev?

The Usos & Ryback vs The Miz and Mizdow & Kane

Decent match with decent spots. It furthered both rivalries heading into TLC. Jimmy is still incensed that Miz approached Naomi, and he does an amazing job transferring that aggression into the ring. Thing about it though, what’s his big issue with it. Not like the Miz asked her to dinner, hell he even sent flowers as an apology. Is Jimmy that insecure with his relationship, that another man helping to further his wife’s career truly the end of the world? Jimmy Uso needs to get his priorities straight and concentrate on winning the tag titles and not on Miz selflessly helping Naomi. Kane and Ryback were actually a bit forgettable in this match. True, Ryback did pick up the win after a Shellshock to Miz, but that’s pretty much all that stood out. The real winners were the fans as Mizdow continued to prove that he deserved more of a spot light. Best moment, Damien suplexed himself in tandem with Miz getting suplexed by an Uso.

Quick match. AJ shown bright, Summer Rae not so much. Gotta say though, getting really tired of all the CM Punk chants when AJ is on screen. Is it really that difficult to chant for her? It’s the same number syllables people. I respect Punk, happy he’s moved on, good for him. When his wife is on screen, cheer for her. Anywho, off my soap box. The match itself, was carried by AJ’s skills. Summer just looks sloppy every time I see her in the ring. Perhaps some more time down in NXT to sharpen her skills is in order. Lee picks up the quick win with her Black Widow submission. 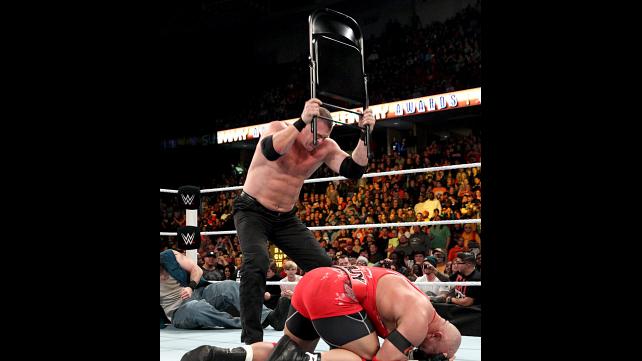 John Cena vs the Big Show

I don’t understand why people are giving Big Show grief over his choice at Survivor Series. Big man surveyed what was happening and frankly made the correct decision and KO punched John Cena (and who of us haven’t dreamed of doing just that for no reason at all?) It was a gamble that didn’t pay off thanks to the meddling Sting, but is that really reason to continue all the hate? I forgave him, isn’t it time for the rest of the WWE Universe to? Apparently not, as the leader of the Cenation looked to get retribution on the world’s largest athlete. The match however was a bit slow, and Big Show easily over powered Cena and shook off shoulder tackle after shoulder tackle. Eventually, in true Cena fashion, the tides turned in his favor and in a feat of strength that impressed even me (and that’s something considering my allergic reaction to the man when ever I see him) he AA’ed the Big Show and went for the cover. Right before the count of 3 however, Mr. Money in the Bank, the undisputed future world champion, Seth Rollins dove in to aid the Big Show. The match ended in a DQ but sacrifices must be made in order to reach the top. Everything then devolved into sheer and utter chaos. I wish I could have seen Seth Curb Stomp Cena’s face into the mat from the ladder, but Dolph Ziggler stuck his nose where it wasn’t needed. All the major players eventually got involved, Erick Rowan, Luke Harper, Ryback, even J & J Security stepped up. In the end it was my beloved Triple Powerbomb delivered to John Cena, by Seth Rollins with Jamie Noble and Joey Mercury, onto the announce table that made my night. No I will not call them Shield 2.0 because there never will be another Shield. Some may have issue with Seth using the Triple Powerbomb, but I say, Why shouldn’t he? The Shield was his creation and it’s likely he came up with the move anyway. The show ended with the remnants of the Authority standing tall and riding the wave of momentum into Tables, Ladders, and Chairs (and Stairs).