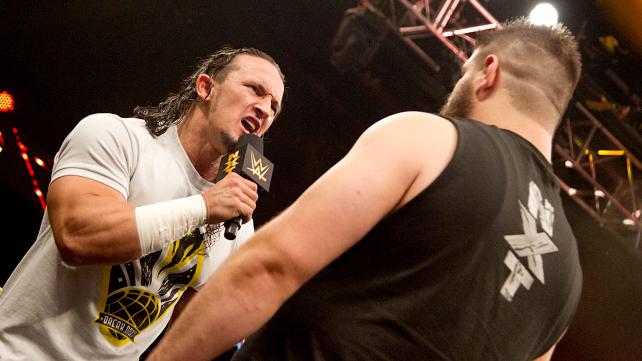 A week in the grand scheme of things is a short span of time consisting of seven days. A week waiting for the fall out show for NXT Takeover: R Evolution? An eternity. The shocking debut, to the fall of the Ascension, and on champion retained, while the other title changed hands, and the unforgettable brutal beat down that ruined a celebration. After the action packed live special, what would be in store for the NXT Universe?

The night began with a very serious Adrian Neville coming down to the ring to address the NXT Universe. The crowd that had booed him so passionately the previous week, stood firmly behind him as they chanted, “Thank You Neville.” When he spoke, Adrian expressed his anger with the vicious attack on his friend and new NXT Champion, Sami Zayn, at the hands of new comer, Kevin Owens, who is a long time friend of the new champion.

The man that gravity forgot wasted little time in calling out Owens, demanding that he answer for his actions. Kevin made it clear that he did not regret his actions and that anyone else’s opinion was absolutely irrelevant.  KO also stated that while he had no issue with Neville, if the former champion wanted to fight, he would fight. The match is set for the main event of the evening. This segment was short and sweet and too the point. If anyone doubted on which side of the fence Adrian’s recent actions left him on, he solidified his remaining a face by seeking retribution against his friend’s attacker. I was drawn into Kevin Owens.

I don’t know why he did what he did, but like Corey Graves stated on commentary, I also don’t feel he owes us one. I like the mystery of not knowing, it makes it more personal in a way. It could be something personal like Sami got called up before him, or simply business in that he wants to be NXT champion, and Sami is NXT Champion. The fact that he hasn’t explained himself, makes him that much more dangerous. Without revealing his motivation, Kevin Owens denies his opponent a window into how and why he operates. 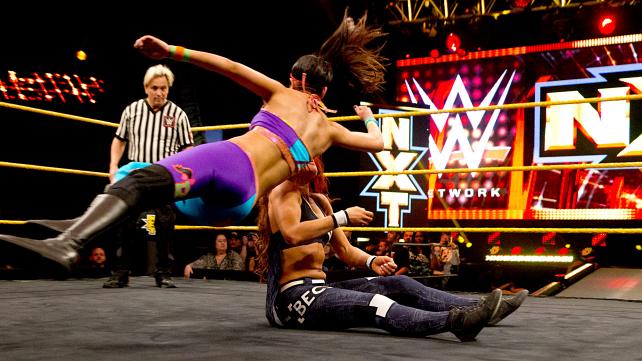 This match is the result of a blind side attack by Becky on Bayley during the Kickoff Show of the previous week. The happy go lucky, Bayley, dominated most of the match, shutting down any momentum that Lynch attempted. However, Becky’s persistence in going after her former friends injured knee paid off as she was able to lock in a submission maneuver she calls the Four-Leg Clover. Unable to crawl to the ropes, Bayley was forced to tap to the devastating hold. After the bell rang, Becky refused to break the hold for a few moments longer in an attempt to maximize the damage. It was a treat to see the more aggressive side of Bayley. It was a complete contrast to the bright and shiney presence that she portrays as she comes down to the ring.

It’s almost as if she slips into another mind and everything that was cute and cuddley suddenly has claws and fangs. She is not one to take lightly as she owned most of the match. But Becky was a treat. She showed that she could weather the storm and wait for the one opening to strike. Throughout the match her attentions were on Bayley’s braced knee. Lynch knew her target and didn’t deviate from her purpose and was able to pull out the win. Both women have in ring styles that compliment each other that made their match exciting. And when it ended you were left wanting more.

This match was ruthless and bordered on cruel as Bull toyed with his prey. The match could have ended much sooner than it did, but NXT’s Immovable Object, is the sadistic type.  One can only assume he grew tired of playing with the nameless soul as a he delivered a flying head but to pick up the win. As he exited the ring and before he could make his way up the ramp, the Lone Wolf of NXT’s music played and the NXT Universe erupted as Baron Corbin made his way to the ring. Bull stayed on the ramp for the duration of the match.

Dempsey did not have to wait long as the Unstoppable Force that is Corbin, destroyed his opponent in just 14 seconds! There was a punch and then End of Days for the pinfall. As Baron exited the ring, Bull stood his ground and the two stood chest to chest. The tension was thick enough to cut with a knife when Bull Dempsey shoved Baron Corbin and then backed off smiling. The first shot taken, Baron stood his ground and stared holes into the fleeing man.

This rivalry is about ready to explode. Each week they get closer to locking horns and each week the NXT Universe is left salivating hungry for the inevitable match. Finally there appears to be someone who will last more than a minute with Baron. And vice versa in someone has appeared that will give Bull a run for his money. I wasn’t too enthused with the bitch like shove and retreat, kinda broke the intimidation factor of Dempsey and made me really want to see Baron Corbin devour the New York Nightmare. 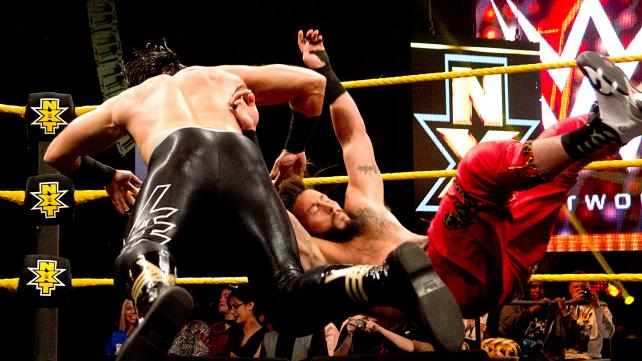 Winner: The Ascension via pinfall

The Ascension rose from the ashes of their defeat last week, to deliver punishment to the Realest Guys on NXT, Enzo Amore and Colin Cassady. The 7ft tall, Big Cass, started the match, which is a bit unsual, and held his own but it was not to last. Enzo, in an attempt to impress Carmela who was ringside, tagged himself in and ultimately cost his team as he was pinned after receiving a devastating STO from Viktor. Instead of celebrating their victory, Konor and Viktor took up the microphone and declared that the war between the Ascension and Hideo Itami and Finn Balor was far from over.

While I would have liked to see more than a minute long match, this bout reaffirms that the Ascension are not to be taken lightly. They dominated the NXT Tag division and held the tag titles longer than any other team in NXT. Was it beginners luck that the angry Japanese man and the demonic Irishman were able to get the win over my beloved Ascension? Perhaps. Only the next battle will answer that for the NXT Universe. It seemed like Konor and Viktor were more comfortable with the microphone. As dominant as they are in the ring, I admit to cringing every time one of them would have a microphone in his hands.

I love the Ascension but I can admit where they lack skills. I am also left to wonder, with their big call up to the main roster looming, how this rivalry with Itami and Balor end? Neither team can afford to take the loss to their momentum if they lose. As a budding team Hideo and Finn, need wins in order to become contenders to the tag titles. But if they aren’t to remain a team, but go their separate ways in singles competition, then losing to the Ascension would be logical. The win in the rivalry giving the Konor and Viktor the extra umph as they rise into prominence on the main roster. 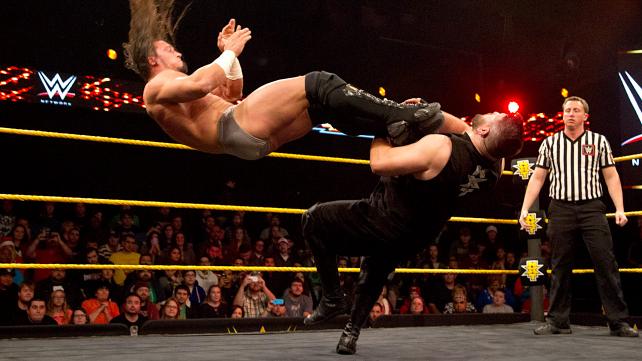 Winner: None; Double Count Out

Adrian Neville was determined to get retribution for the attack on Sami Zayn at R Evolution. But it would not be his this night. Kevin Owens was able to frustrate the former champion by constantly rolling out of the ring when ever the high flier began to mount some offense. A devastating clothesline grounded Neville and he was never able to regain it for anything more than stunning Owens for brief moments. The big man delivered move after move that would have beaten any other competitor, but Adrian would not give up.

The former champion, unfortunately, was sent head first into the ring post on the outside and was knocked cold with the match ending in a double count out. After the bell rang, Kevin Owens was first to his feet. He picked up Adrian Neville and delivered an apron powerbomb. The same move that he surprised Sami Zayn with last week, leaving Adrian in much the same shape. Kevin Owens has solidified his position as a top heel in the company. It doesn’t matter who you are or what you have done, if you are in his way, he will step on you to get to the next level.

With the champion injured, and the previous champion meeting the same fate, who does NXT have that can take on this new monster. His cold stare and lack of concern for his opponent is a beautiful thing to watch and my little black heel adoring heart is eating every bit of it up. The story told with this match almost bordered on cruel as the beating to Adrian Neville almost became uncomfortable to watch at times (not for me, I love a good solid beat down.) Watch out NXT Kevin Owens is here and he isn’t taking prisoners!