‘The Phantom of the Opera’ Adapted For TWO Series!!!

Hollywood continuously proves the theory that projects travel in pairs. It may not be a widely known theory, in fact, I just created it, but that doesn’t mean i don’t have great conviction for the truth it represents. The topic in a dual role right now is ‘Phantom of the Opera‘, the novel from Gaston Leroux first published in 1909. Phantom, of course tells the story of the angelically voiced Christine who is the subject of the phantom’s obsessive thoughts. She loves Raoul, Raoul loves her, the phantom gets jealous. There are many nuances in the book, I’ve left out, there are many nuances in the cliff’s notes version I’ve left out, but none of that will matter if you watch the proposed TV series written by Tony Krantz.

The classic novel that has spawned one of the most remarkable theatrical productions Michael Crawford ever sang  is getting one hell of a makeover. There will be no Andrew Lloyd Webber feelings in this reimagining. The phantom story I know and love is a gothic romance, generally I hate romance, but this is one exception, well the original story is my exception, and Gerard Butler’s face, voice and abs. Tony Krantz is taking on his first writing venture and has chosen the classic French story as his first project. French director Jean-Pierre Jeunet (‘Amelie‘) is boarding the hybrid story that retains a Paris setting but will shift from the 19th century to the early 20th and taking place in 1919 against the less than operatic setting of the Paris Peace Conference. The phantom-character is now a British World War I fighter pilot with burns covering half of his body and finds himself at the center of a string of murders that threatens to embroil the city’s gathered world leaders. The opera house is being replaced by a jazz club and the headliner  finds herself the target of the serial killer. 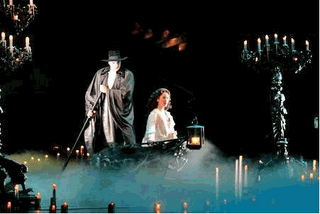 Jeunet was approached with the script and within a week had signed on saying “I look forward to directing Tony Krantz’s imaginative version of ‘Phantom of the Opera’ with Endemol Studios. We have an opportunity to re-tell Gaston Leroux’s classic novel of mystery and intriguing romance against a background of great social change.”

Now for the duality of Hollywood, ABC has recently purchased a ‘Phantom of the Opera‘ drama series pitched produced by ‘Desperate Housewives‘ notable, Marc Cherry that will be set in the modern-day music biz. We’ve come a long way since Lon Chaney played the horrific phantom, times, they are-a-changing.