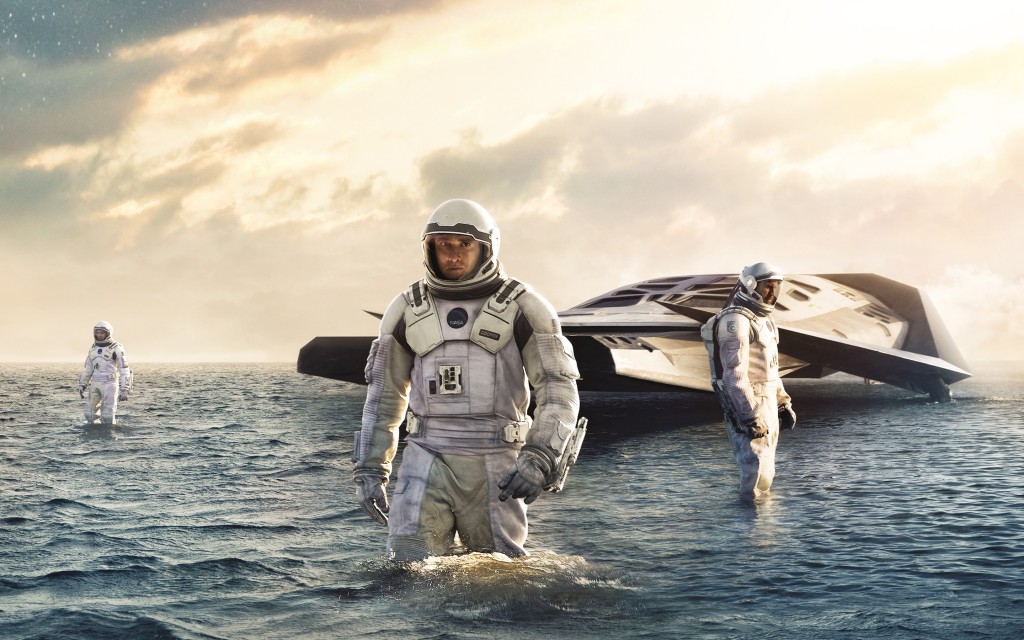 Periodically covering the land, homes, vehicles, indoor counters, and tables inside locked up homes are dust storms, more massive than those in Dune and The Mummy.  The viewer physically feels the force of the dust wall as the sound rocks their seats and chests.  The people cannot see or breathe.  The air has become 80% nitrogen and rising, slightly north of our current healthy air at 78% nitrogen.  Strange?  Yes.  A loud boom shakes the viewer, a drone flies barely above a truck, far below avoiding radar.  Odd?  Yes.  But signs of the end of the planet Earth?  The general public doesn’t know it, but I guess it is a lot like that frog sitting in a pot of water being brought slowly to a boil.  The frog will sit there and slowly cook itself.  Well, not on Cooper’s watch.

Cooper (Matthew McConaughey) is a former NASA pilot, retired due to what seems to be a stealth plane crash.  His daughter, Murph (Murphy for Murphy’s Law), believes a ghost is in the house trying to communicate through books that had fallen from a bookcase in her room.  Cooper doesn’t believe in ghosts, but he does believe in gravity.  By following the roadmap left by ghosts or gravity, Cooper and Murph find a NORAD location that is on a mission.  Enter Professor Brand (Michael Caine) and his daughter, Amelia (Anne Hathaway).  They have their hands full with how to save the human race, Project Lazarus.  Plan A – find a new world and bring as many humans as possible.  Plan B – fertilized eggs for colonization.  Both feasible, right?  What’s the problem then?  Time.  Time is a killer, the time to travel for answers and a new world.  In addition, the time required sending the information home to save the day.

Interstellar bounces back and forth between the past, present, and future.  This plot arrangement fits the theme of the relativity and fluidity of time.  The film is a real mind bender to think of how the universe works with black holes, wormholes, time, dimension, etc.  FYI, it was amazing to see the awe-inspiring images of space in IMAX.  I highly recommend viewing in IMAX, if you can.  The landscape is breathtaking.  Flying through the wormhole somewhat reminded me of Stargate travel.  Then there’s T.A.R.S., C.A.S.E., and poor little K.I.P.P., delightful banter and much appreciated comic relief.  I haven’t seen such awkward looking robots since the Doctor Who and Lost in Space shows, points for originality though.  Cinematically, the film is beautiful from the angles to the varying speeds of motion.  As Nolan, created Inception, cinema style certainly left its mark on Interstellar.  Being shot and exhibited on 70 mm film brought a realism that makes you want to believe in the world presented before your eyes.

I have loved to watch McConaughey’s performance ever since A Time to Kill.  He’s versatile, athletic, and equipped with a varied emotional range.  The Academy Award winner is worth his weight in gold.  From EdTV, U-571, and The Wedding Planner to Reign of Fire, Magic Mike, and Dallas Buyers Club, McConaughey is the man without bounds.  Caine, as usual, is as real as they come.  Hathaway is overexposed.  She put out a sound performance, but some of her dialogue is so understated that you miss much of it.  Perhaps, she couldn’t find the balance between her portrayal of Amelia and the energy McConaughey brought to Coop.

Interstellar is not for the viewer that requires spoon-feeding.  It is a mental endurance journey.  It is not boring or trying by any means.  Interstellar is a fantastical trip without drugs.  Just as you think you’ve reached the end, you haven’t and you’re glad about it.  Same can be said about the universe, given mankind ever does get to truly explore it.  Interstellar is taste of the possible.  Take a slice, you will like it.