Graphic Novel ‘From Hell’ Heading To FX As Series!!! 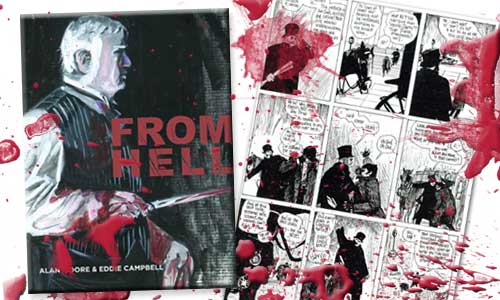 ‘From Hell‘ may sound like the name of a Johnny Depp film from the early 2000’s and you would be right. What began as a 500 page graphic novel by Alan Moore and Eddie Campbell, then re-worked into a 20th Century Fox film starring Depp and Robbie Coltrane. There may be a bit of a detective vibe here but don’t expect a Sherlock-type reveal. Where Jack the Ripper was quite selective of his victims, the murders themselves created an equality among the classes with fear being the common denominator. Thus ends today’s master class in ‘From Hell‘.

Horror and real-life murderous legends are are all the rage in TV and film and the lore of Jack the Ripper fits right in. Think about what’s on right now, ‘Penny Dreadful‘ puts classic monsters front and center every week, ‘American Horror Story‘ and it’s newest off-shoot ‘American Crime Story‘ take spectral fear up a notch and ACS will re-live some of the most vile and polarizing crime stories in history. There were reports of two TV series that will take the true events of the Manson family’s murder spree and transform them into a series format. Crime sells and writers are looking into all viable options.

FX has captured rights to the graphic novel with producer from the film, Don Murphy on board and David Arata (‘Children of Men‘)  writing the script. The novel tells the story of the gruesome deeds with Jack the Ripper as the main character. We see plenty of the violence and savagery that went into the murders and what made them so sensational.

The film, as all do, left out some really fascinating twists and turns in the story, focusing on the broad points with weak plot bridges, if you will, tying the story together. A drawn out mini-series opportunity can tell a more complete story without film caveats.

‘From Hell‘ came out as a multiple part comic book from 1989 to 1996 and then a collected set in 1999. It remains one of the most successful graphic novels of all time, despite having 46 pages of footnotes that flesh out more detail and depth to events. The collective stories are fiction, but is rooted in fact.