Director Bennett Miller has chosen his four films wisely. Starting with ‘The Cruise‘ back in 1998, Miller has only three more films on his resume, including ‘Foxcatcher‘. The previous two were ‘Capote‘ was an Oscar winner as well as ‘Moneyball‘. Miller has an uncanny knack for telling compelling stories that are based on real life events and engaging the audience to not only be entertained, but to think and discuss these characters and sometimes real people’s motives in what they did in their particular story. You can add to that, Miller’s success in getting his actors to win Oscars almost across the board, and this very dark and creepy film ‘Foxcatcher‘ is no different.

Written by E. Max Frye and Dan Futterman, ‘Foxcatcher‘ has many layers that all fall into the disturbing, freakish, and ultimately tragic character study of one man. It’s quite an emotional and difficult journey to take in the theater. One that is sometimes a bit on the slow side, but none-the-less, brilliant. And it is here, where you can see Steve Carell, virtually transform into one of the creepiest characters in recent memory.

That story follows or shall I say centers on the story that shocked a nation back in the mid 1990s where a member of one of the wealthiest families in the world, John du Pont (Carell), murdered a longtime friend, gold medal Olympic winner in wrestling Dave Schultz, in cold blood. And Miller, Frye, and Futterman try to show us some of the motives that might have caused du Pont to commit this atrocious act. The film is actually told through the eyes of Dave Schultz’s brother, Mark Schultz (Channing Tatum), who also won the gold medal in wrestling at the 1984 Olympics with his brother. 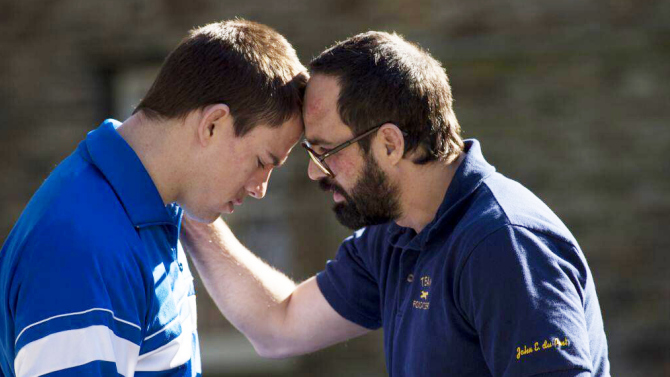 However, three years later, he is barely getting by in his small apartment and making money by trying to encourage elementary school kids to be excited about school and sports. His brother Dave (Mark Ruffalo), seems to be doing a bit better with his beautiful wife Nancy (Sienna Miller) and their young kids in Colorado. One thing is for sure though. Mark is a very hard worker and determined to be the best he can be, which is why he almost immediately accepts a first class ticket to to the du Pont estate to talk with John du Pont, an older and very creepy man with very pale skin and very unnerving eyes. His nose protrudes out quite far, but John always keeps it tilted upwards as if he’s better than everyone else. It will take a minute, but this man is in fact Steve Carell under heavy makeup, and he just owns this unconventional role.

From when du Pont starts to talk with Mark, you can tell the creepy factor is there, but his speeches are actually quite encouraging and patriotic, which is the key to getting Mark to sign on with du Pont as his coach and manager for future competitions. But it’s very clear early on that du Pont has other motives. Du Pont is a weak person, both physically and mentally, with only his extreme wealth to shield him from anything harmful with the exception of his mother (Vanessa Redgrave) and her love for horses, which he despises. In fact, if you met du Pont on the street, you would probably veer to the other side, but due to his money, he has been in the best school and best social circle, but alas, he has no friends.

Only servants. After Mark wins a few contests, du Pont makes him a coach and sets up a compound on his property called Foxcatcher where they will find the best athletes in the wrestling world to compete in future Olympic games. But for some reason, du Pont turns on Mark, even calling him names, and enlists the help of his brother Dave to more or less take over. Over the course of this segment, du Pont more than just verbally abuses Mark.  While it’s never shown beyond that, it’s definitely implied. The dynamic and relationships keep transforming and shifting between these three characters, so much so, that each relationship is very brutal to watch in its spiraling downfall, up until the horrid tragedy. But it makes for a very compelling experience, on that you can’t believe actually happened.

Miller has concocted a brilliant piece of storytelling and conjured up some award winning performances from his cast. While the film plays a bit slow at times, these performances and characters keep things very interesting and terrifying. The story is told over the course of a decade, and the editors and director did a fine job in connecting each big bit of the story together to tell us what just went through du Pont’s mind that lead him to murder. Carell is one of the finest actors out there right now. I know we’re all used to seeing him make us laugh and act goofy, but he is equally good at playing sadistic and creepy ,and it shows perfectly here with his mannerisms and speech. You’ll feel your skin crawl every time he’s on screen.

Tatum turns in a very volatile and excellent performance as well. You can see the pain and agony on his face in every frame, and you just want him to do the right thing. And of course Ruffalo is amazing here as well, as he is the best friend everybody wished they had. He pulls it off with such genuine charisma, that it really is a punch in the stomach when we get to his untimely fate. ‘Foxcatcher’ is a well done film and a great addition to Miller’s resume. While it might drag a bit, it’s worth the dark journey to take this riveting ride.