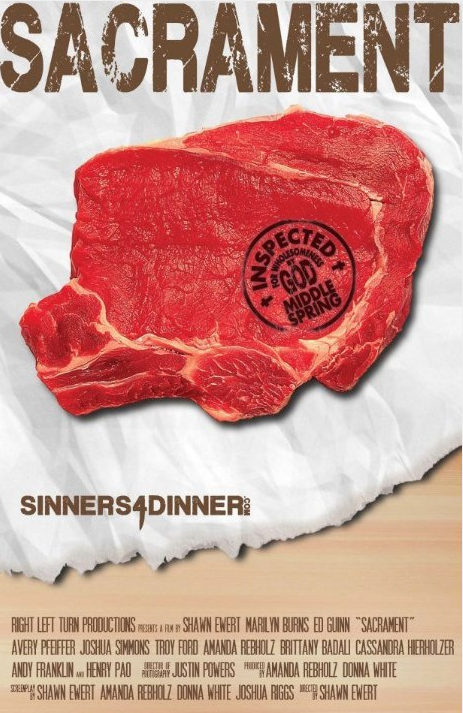 Let’s pretend it’s October 31, you decide to see a movie, you approach the ticket counter and utter the most cliche’d line that we all learn as tiny children, “Trick or Treat”. Think about that phrase, it’s not just an open and shut demand for candy, there is always the option for trick. Let’s say the guy selling you a ticket for the movie decided to give you a trick instead of a treat. That’s what watching this film was. ‘Sacrament‘, not to be confused with ‘The Sacrament‘ from last year. While both feature extreme religious cults, that’s where the similarity of the films ends,  one  drinks the Kool-Aid and one stays for dinner….literally.

First feature film from Shawn Ewert, who pulled off a hat trick by writing, directing and producing. Featuring Troy Ford, Cassandra Hierholzer, Amanda Rebholz, Henry Lopez Pao and Avery Pfeiffer. This is the story of a racial and socially acceptable group of friends heading off for a roadtrip, wanting no more than to sustain themselves with brew, bud and fun. As the flick gains momentum, nothing according to their wishes even comes close to happening. The story was a bit fresh in replacing the typical boy/girl couple with two men.  If you have any lingering homophobia, this film will toss you straight into heart arrhythmia. There is a serious case of visible man-junk in the film. Another modern turn this film represented was not just the token chubby guy, but there was a sizeable chick, as well. Kudos to you, Shawn Ewert! However, original casting choices do not equal a great movie. 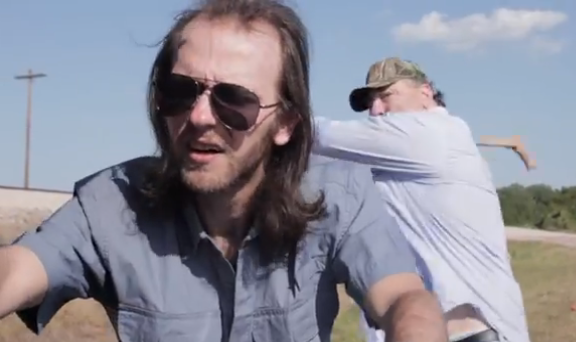 As the roadtrip gets underway, there is the threat of a storm that would be too dangerous to continue driving, so they head to the next deceivingly quaint town they come to. The residents of this town appear mostly hostile and not welcoming, instead of taking the demeanor as a bad omen, the gang checks into the local B&B, run by an equally hostile, creepy woman and her dumb, but strong son. After procuring the rooms in a mandatory boy/girl separation, they check out the town. As all Texas towns are, Middle Spring loves their BBQ and push it on newcomers. It’s obvious to the viewer what their smoked meat is made from, but the characters in the film don’t realize it, yet. 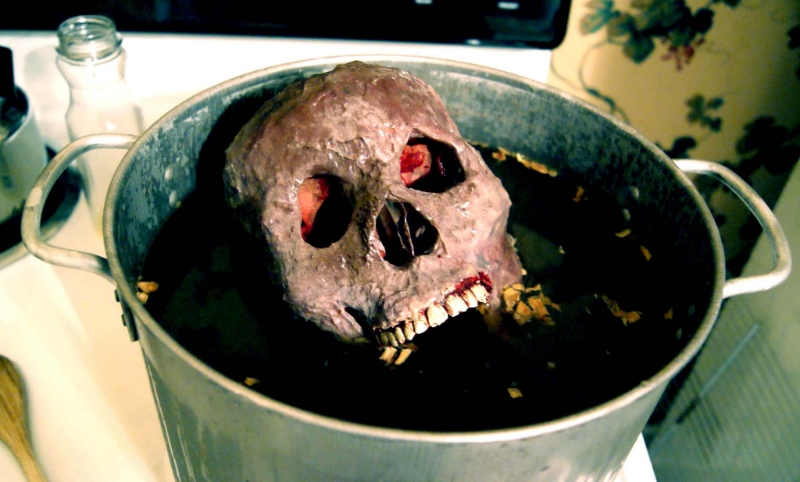 The actors in lead roles felt strained, wooden and more like they were in a 5th grade play reading the lines in public for the first time. Middle Spring’s Sheriff Deputies hold my award for the absolute worst acting I’ve ever seen.The older actors were the only life that was evident in a stale script that included almost word-for-word a few lines of dialogue lifted straight from ‘Sixteen Candles‘. Maybe it was meant tongue-in-cheek, but I didn’t get that vibe from it. The plot was skating on thin ice from a tenuous framework of ideas. It could have even been a bad B-rated flick, if the acting was better.