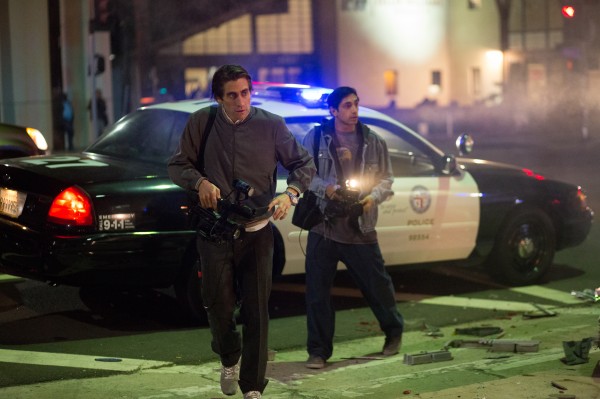 Nightcrawler opens with the moonshining down on the city of angels, we see a thief, Louis Bloom (Jake Gyllenhaal) in action.  He is cutting away chain-linked fence when a security guard spots him.  A bright light shines on the sunken face and wiry form of Bloom.  (According to IMDB, Jake Gyllenhaal lost 20 lbs. for the role.)  The rent-a-cop asks for ID, but Bloom repeatedly diverts his requests with distracting comments and questions.  Bloom is a fast-talker.  Cut to bargaining with a scrap metal yard foreman in an attempt to sell the copper wire and chain-linked fence Bloom had collected.  The foreman doesn’t waive on his offer and resolve, but Bloom rapidly counters like a string of firecrackers pushing for better pay.  The foreman refuses to give Bloom a penny more than his offer.  What does Bloom do in response to this let down?  He asks for a job.  As plainly as he can, the foreman assures Bloom that he would never hire a thief.  Scraping to make ends meet and living in squalor, Bloom is desperate for a fast track to success.

Bloom drives up on a car crash and becomes enthralled.  He meets Joe Loder (Bill Paxton), a freelance cameraman, who is recording the carnage for news broadcast.  A light bulb dawns on warped mine.  Bloom immediately takes steps to become a cameraman.  He steals to purchase a police scanner and a camcorder.  Wait till you see what he does to the competition.  When Bloom makes a decision, nothing gets in his way…NOTHING.

Nightcrawler is an adrenaline tidal wave that was immensely engaging.  Not a one-time bang, but a sequence of bangs, small to gigantic slamming right in your face.  Well-done cinematography.  The car chase photographic capture is amazing.  The angles and speed of the chase place you, not in the car, but upon its hood.  Being atop a speeding Dodge Charger, ducking and weaving through traffic gives quite the rush. 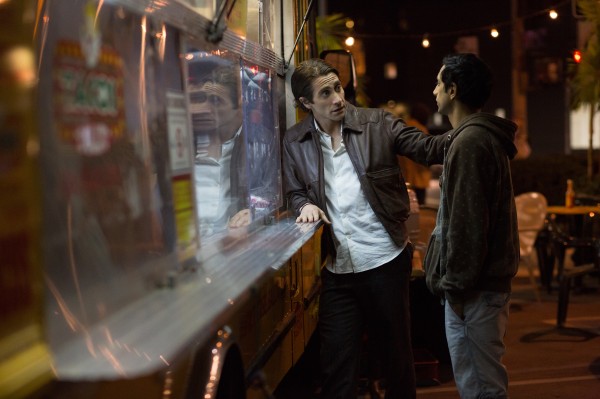 Now this is a thriller.  Nightcrawler is a good movie.  It’s the twisted lovechild of grown up Donnie Darko and Fast and the Furious.  At one point, Bloom decides that his success requires a sexual relationship with his older news producer, Nina Romina (Rene Russo).  She goes to dinner as a courtesy, but when Bloom reveals his intentions she tries to shut him down.  Just as with the scrap metal foreman, Bloom fires off multiple consequences if she resists him.  He threatens to take his eye-catching recordings to another news station thereby threatening her job.  The balls on Louis Bloom are gigantic and made of titanium!  I’ve never seen determination in action until Bloom.  Romina gives in because his films have become the crack that launches her career into outer space.  As was evident in Romina’s anxious question when Bloom arrives with a new video, “You have it!”

Gyllenhaal is diabolical, creepy, methodical, ruthless and psychotic.  Russo appears desperate and yet inspired by the Bloom character.  The sound design was brilliant as it both kept our hearts pounding and our bodies at the edge of our seats.  Very enjoyable, yet morally perverse original story.  What a ride!