Film Review: The Book of Life 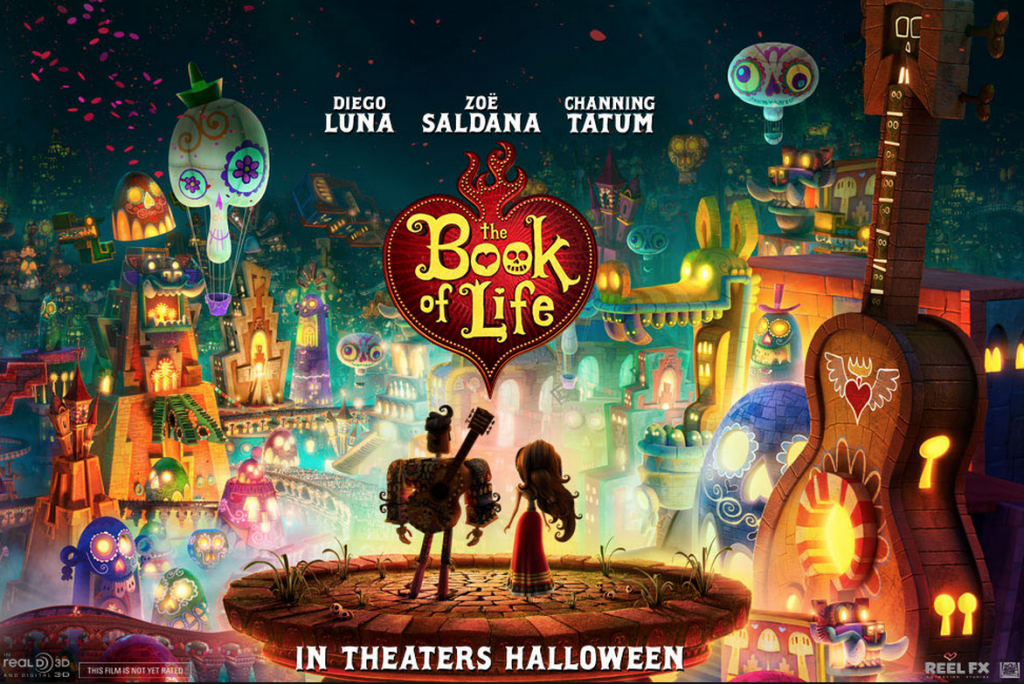 When it was announced that Guillermo del Toro was producing a 3D animated children’s movie about Día de los Muertos, it was easy to assume that The Book of Life would turn the festival of the dead into something creepy or macabre along the lines of Nightmare Before Christmas. Surprisingly and delightfully, del Toro and director Jorge R. Gutierrez created a funny and touching movie that gives the holiday the kind of celebration it deserves.

One day, a bus of the school rejects shows up at a museum for a class field trip ready to be bored and belligerent. But after their first encounter with the very capable tour guide, Mary Beth (Christina Applegate) the children pay attention and are rewarded with a secret tour of a closed area in the museum. Here, amid displays of Mexican culture and history, Mary Beth begins to tell the story of a Manolo (Diego Luna), Maria (Zoe Saldana), and Joaquin (Channing Tatum).

Childhood friends, it becomes apparent very early that Manolo, Maria, and Joaquin like to cause trouble and some of the trouble will be among the trio, as Manolo and Joaquin begin to vie for Maria’s heart. On one particular day of the dead, Xibalba (Ron Perlman) – Guardian of the Land of the Forgotten and La Muerte (Kate del Castillo) – guardian of the Land of the Remembered make a bet as to who will end up with Maria. Xibalba, doesn’t intend to play fair, and secretly gives Joaquin a special amulet to give the advantage. From that day on, the two gods take particular interest in the lives of the three friends and troublemakers. 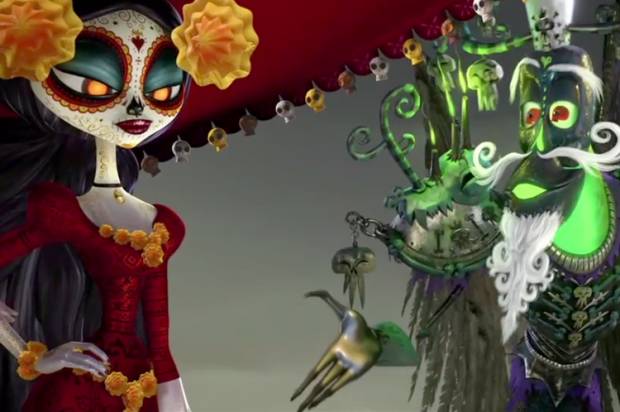 After one particular incident shows that trio’s antics have gone too far, Maria’s father, the town leader, decides to send her away to finishing school in Spain. Both saddened by her absence, Manolo and Joaquin stay friends but start down different paths. Guitar loving Manolo is trained by his father to become a bullfighter – like other Sanchez’s before him. Joaquin turns to the town guard and then the army, where he becomes known for his invincibility.

Several years later, Maria returns from Spain all grown up (and quite independent) and must choose between Manolo, the more sensitive one who cannot gain the respect of his father or the town and Joaquin, everyone’s dream guy and maybe the only defense the town has from the ruthless bandit, Chakal (Dan Navarro). Their struggle to win Maria takes them farther down different paths with Joaquin finally understanding what he is capable of on his own, and Joaquin traveling through the layers of the underworld to find his heroism. 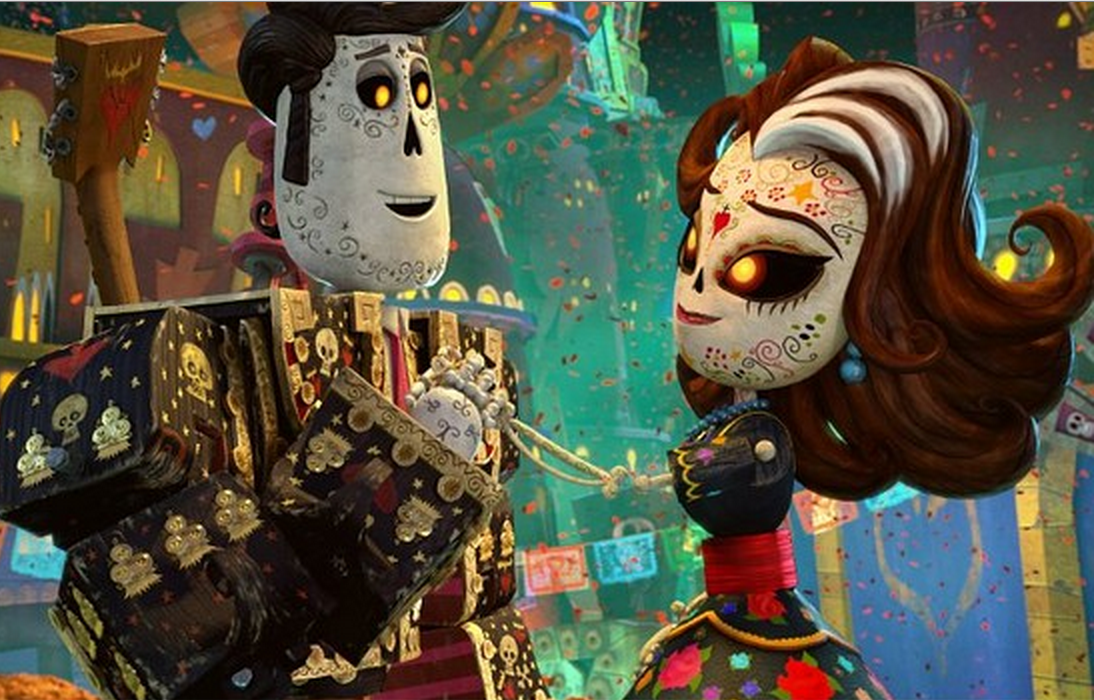 Enough story lines for you? There actually is a lot going on in this movie, but the family strife, love stories, internal struggles, and adventurous journeys are well told and weave together for one final climactic scene. The writing has a lot of funny things thrown in for both children and adults, but underneath there is a valuable lesson and story.

The animation is amazing. Beginning in the world above, we are presented with a subdued picture of a little Mexican desert town. During these scenes, I questioned why the 3D effects were needed. The animation would have been good enough without making it pop in that way, but when the story moves to the underworld, it is apparent that this is what Gutierrez was aiming toward. It is beautiful and bright and not scary at all. At times, you feel like you are flying and careening with the characters. And the 3D continues to support the story as Manolo takes his mission across all levels of the underworld. 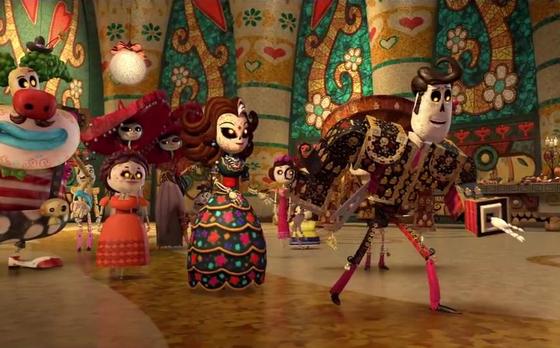 Another highlight is the music. Gutierrez and his team took many popular songs and gave them more of a Latin flavor. You never hear a full song, but they highlight the moods of the story and give a new look at some old favorites. I particularly suggest you listen for Creep. It’s pretty great.

The movie also does a great job of introducing the concept of Día de los Muertos. When many hear the name or see the skeleton figurines – Katrinas – used to celebrate the day, they might believe it is a morbid holiday. The Book of Life really illustrates the true purpose – to remember those who have lived, celebrate their lives, and know that as long as we remember, they go will always be around.

Finally, the movie highlights the voice talents of a diverse cast, but it is obvious that del Toro and Gutierrez wanted to focus on Latino actors. There are many favorites providing their talents including Hector Elizondo, Danny Trejo, Cheech Marin, and even Plácido Domingo. But even with the emphasis on Latino/Mexican storyline, culture, and actors, this movie provides a story we can all love.

I’m giving The Book of Life five stars. It is beautiful to watch, has a great story, and you can tell a lot of care and ambition went into this movie – it shows.