‘Care Bears’ Announced For a Reboot By Netflix!!! 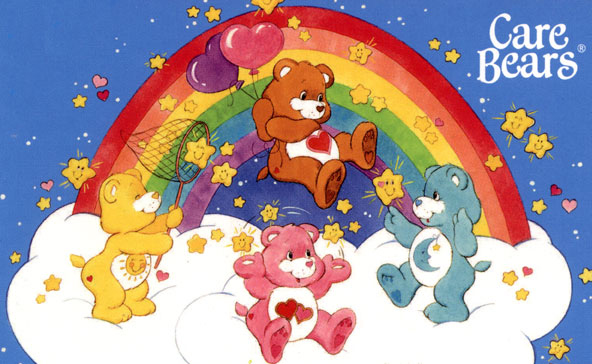 Netflix keeps tightening its grip on subscribers. They’re either bringing us original content (‘Orange Is The New Black‘) or bringing a sequel straight to streaming (‘Crouching Tiger Hidden Dragon‘), if they’re not doing one of those, they’re giving a beloved childhood favorite a makeover.

Reboots are all the rage in the movie biz. It may be filling out the cast with an ethnic diversity not present in the original, renovating the platform from film to TV or vice versa, or simply freshening up the characters and dialogue with a little nip and tuck or a lift here and there. Live action fare isn’t the only target for reshaping what we watch, animation is up for grabs, too. ‘Care Bears‘ has found itself in the SVOD service’s cross-hairs. The toon from 1985 features the Care Bears and their Cousins hanging out on clouds, doing cute things and helping kids on Earth when they have a problem. The parents of these kids never seem to notice when their kid runs off with bright colored bears that show up in a cloud car, though. Where are the Family Welfare Bears that make sure mom and dad aren’t child molesters, drug dealers or Baptists? I took a little side-trip, but my point is there.

Netflix is giving new life to well-known children’s franchises because they are trusted brands. Earlier this month, the streaming service announced a ‘King Kong‘ animated series and movie that, with ‘Care Bears‘, will debut in 2016. The network seems to follow the old adage of “If you’re not growing, you’re dying”, since the project announcements are coming left and right. ‘The Magic School Bus 360˚‘ based on the children’s book and a DreamWorks Animation adaptation of ‘Dinotrux‘.

This isn’t the first reboot for the ‘Care Bears‘, in  2012 the chubby cubs were given a CGI makeover that aired on Hub Network. I’m usually against reboots, but when it comes to animated favorites, but I actually like seeing the updated versions of my favorites. I’m just waiting for someone to freshen up ‘Gummi Bears‘ now.