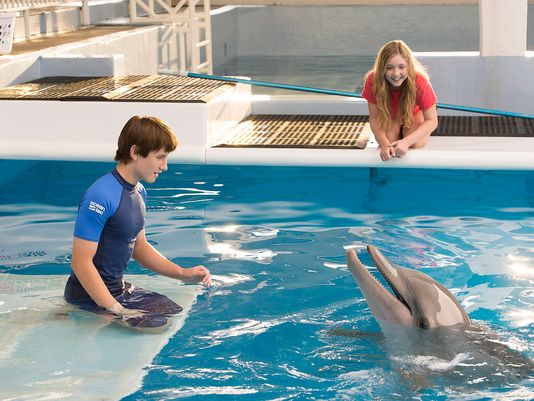 Dolphins are not fish…they are mammals.  Playful, passionate, and full of expression, dolphins have ways of letting you know what’s on their mind.  Perfectly timed faces full of water from a blowhole, varying pitches of speech, and solemn silences each have their own purpose and meaning.  Fish cannot easily do that.  Dolphin Tale 2 is a wondrous display of these characteristics.  Picking up where the Dolphin Tale left off, Winter (portrayed by the “real” Winter) still lives in Clearwater Marine Aquarium.  She is the main attraction and the aquarium has grown by leaps and bounds.  For those who have seen the first Dolphin Tale (don’t worry it won’t ruin the movie, if you haven’t), Winter’s first friend was Sawyer Nelson (Nathan Gamble).  Sawyer has learned a lot about marine life during his time with Winter and the Clearwater Marine Aquarium.  So much so that he is invited to an educational high-seas adventure by a prestigious college.  Such an invitation would be a marine enthusiast’s dream, but it comes with a price.  Three months at sea, far from his friend, Winter, and the area.

Winter has had changes take place in her life, too.  She has a friend in the water, Panama.  Panama is an older female dolphin.  Dolphins that live in captivity must be paired with other dolphins.  Tragically, the bond between Winter and Panama is broken by Panama’s unexpected death.  Winter is devastated, brilliantly captured by editing and the dolphin’s natural countenance.  According to the film, law demands that dolphins must be paired with another dolphin of the same sex while in captivity.  Without a new female dolphin friend, Winter will be transferred from those that love her, Hazel Haskett (Cozi Zuehlsdorff), Dr. Clay Haskett (Harry Connick Jr.), Lorraine Nelson/Sawyer’s mother (Ashley Judd), and Dr. Cameron McCarthy (Morgan Freeman).  Can Winter be saved again?  Will Sawyer leave his small pond where he is a big fish?

Dolphin Tale 2 has a significant amount of poor dialogue; slightly slow pace at times, and cheesy acting that could have ruined the film.  Perhaps the fact that this is a true story made it difficult for either the writers or the actors or some combination of both.  Actually, the sea creatures put on a better performance than the humans, especially, our beloved annoyance, Roofus the pelican.  Roofus as was in the first film the comic relief with MUCH attitude.  With a roster of actors and actresses, I expected more.  Freeman’s limited scenes saved him from the abundance of cheese.

Odd one-liners like “…look like a fish, smell like a fish, hey…”  This paragon of acting ability (Shawshank Redemption, Olympus Has Fallen, Se7en) was reduced to little quips.  As I was reminded by IMDB, Dolphin Tale 2 is Freeman’s fifth film with Ashley Judd (“Kiss the Girls“, “High Crimes“, “Dolphin Tale“, and “Olympus Has Fallen“).  Judd’s presence is barely noticed.  I adored Connick in Hope Floats and was freaked out by him in Copycat, but he was just kind of blah in Dolphin Tale 2. 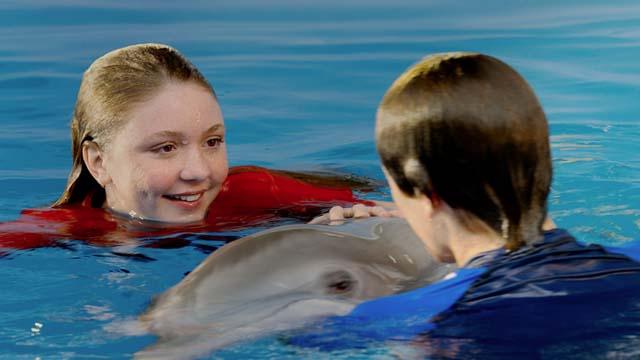 Dolphin Tale 2 is a dolphin/animal lover’s paradise.  The underwater shots are breath taking and full of merriment.  As I stated above, the editing was well done.  I won’t spoil it for you, but the emotions of the sea creatures is captured through the careful ordering and splicing of footage.  Despite the disappointment in the human acting, the dolphins, sea turtle, and pelican hold this movie together.  Dolphin Tale 2 is a life lesson in love and loss as well as not being afraid to step outside your comfort zone when growth opportunities come along.  Good family fun and enjoyable.