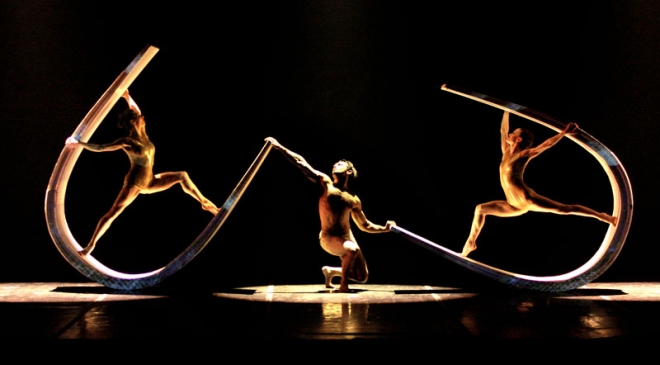 While set to an ethereal melody, the retractable chandelier ascended into the ceiling to create a starry sky.  Showtime.  The sky dimmed, the music came up and then a spotlight shone on an abstract image on a black curtain, which appears as wood chips on fire, in reds, oranges, and browns ablaze.  This perception changed over the journey that is Alchemia.

MOMIX, the dream makers of Moses Pendleton’s vision, is a magical company of dancers/illusionists.  According to the program, for thirty plus years Pendleton and MOMIX have brought enchantment to the world on five continents.  Through the synchronization of light, sound, images, and movement, the story unfolds.  MOMIX’s latest production, Alchemia, is a whimsical path from fire through water to the most precious of metals, silver and gold.  In Pendleton’s words, this beautiful array takes the audience on a ride that “pulls men to women, dark to light,” and I’d add searing warmth to refreshing coolness.  After the he program starts with

The costuming, props, and choreography were brilliant.  These tools showed off the athleticism, dexterity, agility, and grace of the performers.  Emotion, peace, and struggle, all of which are part of life’s expedition, elegantly materialized as each piece began and transitioned to the next. Whether it was the angelic floating of a sparkling “bride,” the undulating banner of fire enveloping the dance, or the effect of extended assets that drove the male dancers frantic and into a whirlwind, the communication was a success from stage to audience.  I was surprised that amidst this wondrous performance that I was reminded of a film and an infomercial. 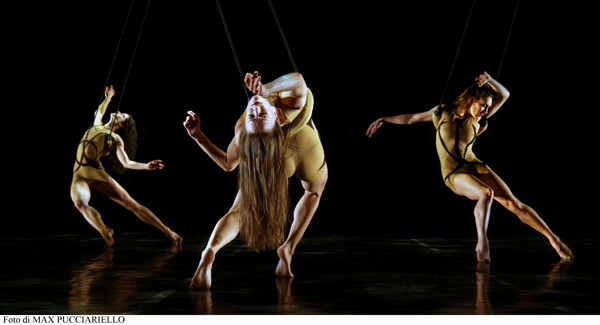 The song, “Requiem for a Tower,” brought the film Requiem for a Dream to mind.  In one part of the show, the stage is black as pitch and from the darkness emerges swinging glow-in-the-dark figures.  The infomercial reminder part came from the way they were swinging; I envisioned a set of five Gazelle exercise machines cloaked by the darkness.

Although some of the dances were a little dragged out like the “Walking Dead wedding” (Pendleton’s words, not mine, but still accurate), I enjoyed the spectacle.  The abundance of images related to the songs, which tied to the dance moves in such a way that uplifts and fascinates the spirit.  Despite the ensemble’s effect, at times it was a lot to take in, so I missed an image here and there and may have missed clues to the mystery that is the MOMIX world.  Walking out of the gorgeous Winspear Opera House, my imagination was expanded.  Pendleton and his company produced designs that mesmerize the mind.  Alchemia is a treat for the senses that I highly recommend.