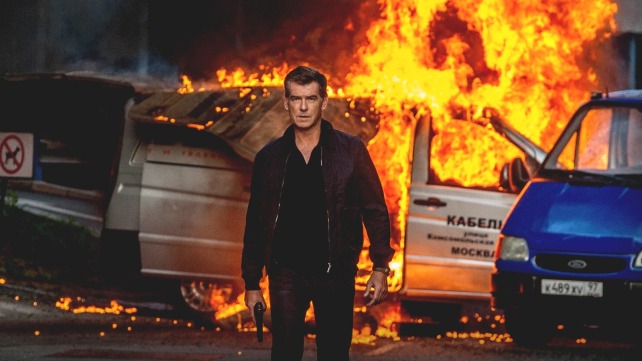 Pierce Brosnan…a previous incarnation of James Bond has added producing to his repertoire.  Brosnan’s latest production is the spy thriller, The November Man, a genre with which Brosnan is a little familiar.  Peter Devereaux (Brosnan) is a super spy who trained the newbies before his retirement from the CIA.  Being the Yoda of espionage, Brosnan’s all-knowing charm shines and somewhat terrifies.

The film opens with a couple sharing a kiss, David Mason (Luke Bracey) and his female companion, who turns out to be a waitress at the restaurant.  Mason is unaware of Devereaux in the background observing.  The waitress gets back to work and Devereaux slides with today’s training lesson for Mason.  Devereaux expresses the importance of having no ties in the spy trade and presents a listing of consequences for Mason’s waitress friend if taken into enemy hands.  Suddenly the phone rings and they are on duty again.  Mason with his sniper rifle and Devereaux at point.  The mission is to protect an ambassador from assassination.  Devereaux assumes the ambassador’s dress while Mason gains a covered high perch on which to sit and wait.  Devereaux steps out of the ambassador’s car into the crowded square.  Mason does not have a clear shot of the assassin.  Devereaux orders him not to shoot.  Mason disobeys, kills the assassin, and saves Devereaux.  However, the assassin isn’t the only person killed.  Devereaux stresses the importance of obeying orders.  Will Mason learn his lesson? 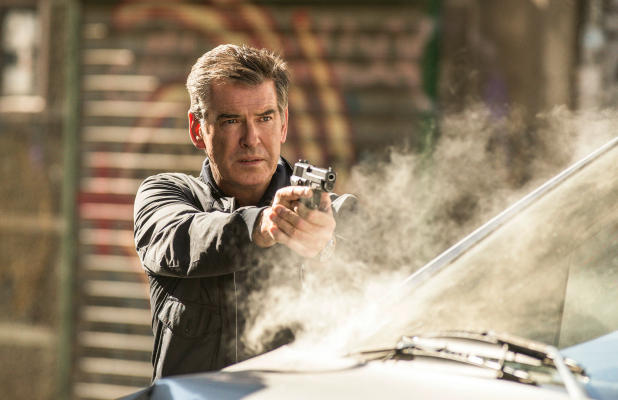 The November Man is your classic spy storyline of the wise older spy teaching/fighting the young and impulsive spy.  We have seen this in movies like Spy Game, the Mission Impossible series, etc.  The November Man manages to kindle a few more sparks out of this formula.  The use of varied cinematographic styles both aid and hurt the film.  For instance, making the main assassin a woman, Alexa (Amila Terzimehic), was a sound choice.  Though Alexa hardly had any lines the upward angle shots, the use of mirrors to show her flexible and presumed agility aided her menacing persona.  I would have liked to see her do more fighting scenes.  She kind of reminded me of Noomi Rapace’s performance of Lisbeth Salander in the Swedish film, The Girl with the Dragon Tattoo.  Costume design was well chosen to present the cold and collected visage of the assassin.  Unfortunately, the slow motion usage was not consistently utilized to the film’s advantage.  It was an odd decision to make the Devereaux/Mason fight in slow mode.  However, slow motion brilliantly captured the Mason rampage later in the film, particularly the mid-air lunge punch at the bad guy on the stairwell.  You’ll recognize it when you see it.  It was powerful and looked cool.

Like so many films, the opportunity to bring positive strength to a female character was missed in The November Man.  Alice Fournier/Mira Villapova (Olga Kurylenko) had the desire to avenge the execution style murder of her family.  She even had a brilliant plan to achieve her goal.  However, the filmmakers chose to turn her into a damsel in distress so Devereaux could save the day.  This was disappointing and made the scene go slightly flat.

Brosnan was his usual smooth operator self as Devereaux.  However, seeing his light version of a dark side did not really work.  Turning cold was more like turning a little chilly.   Bracey was a nice somewhat new arrival on the acting scene.  He is hot, athletic, and shows promise for his future roles.  I look forward to seeing what he does with his upcoming role as Johnny Utah in the 2015 remake of Point Break.  The character/actor that really knocked The November Man down in my approval rating belongs to Hanley (Bill Smitrovich).  Smitrovich presented an ok performance in the beginning, but midway through the film made too dramatic a switch for his character.  His demeanor, volume, word delivery was too over the top.  I just wanted to put a muzzle on him, literally.

Overall, The November Man is a good spy thriller.  Because of a few really lame lines of dialogue and Smitrovich’s performance moved me to give the film 3.75 out of 5.  I recommend the film for good action entertainment with just a little caution against the occasional lameness.