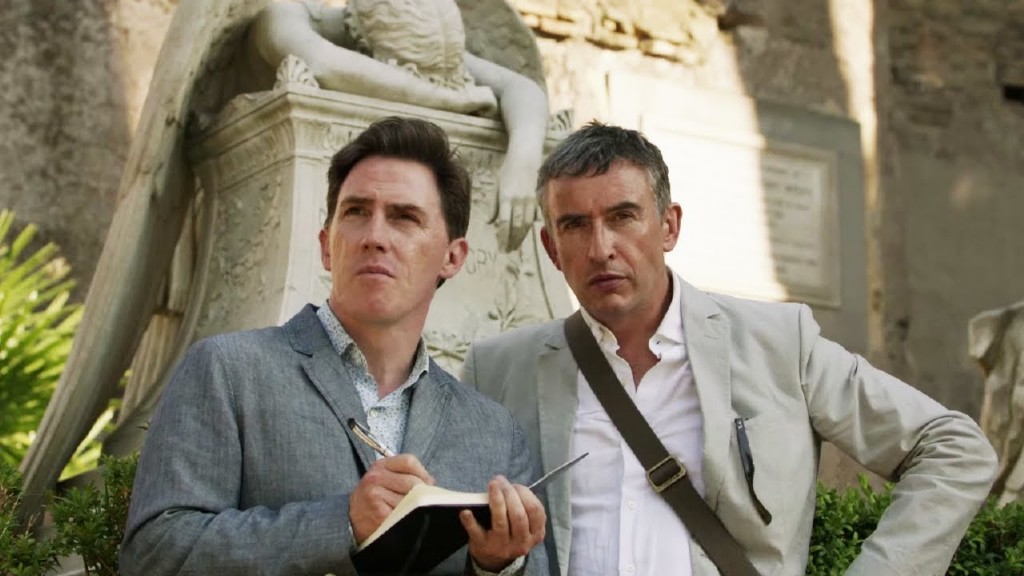 I’ve always wanted to take a trip to Italy. I’ve dreamed of seeing where my family came from, quenching my thirst on some fine Italian wine, hiking up the hills and looking out at the ocean, gaining thirty pounds on some of the best food I know I will eat, and of course, re-enact scenes from ‘The Godfather II‘ to pay homage to my family who came from Sicily. I figure by sailing on the open ocean to a good restaurant or spending the day at a wine vineyard, I might just end up moving and living there. And Michael Winterbottom’s ‘The Trip to Italy‘ made me want to fast track this goal.

This part documentary, part narrative is the followup to 2010’s ‘The Trip’, which had actor-comedians Steve Coogan and Rob Brydon journeying in the England countryside, wining and dining, while talking movies, life, and the general pursuit of happiness. Now when Brydon (a famous British comedian who has his own show) calls Coogan (Alan Partridge himself) to go on yet another journey – this time to Italy, Coogan responds with, “Sequels are never as good as the first.” Brydon then responds with the usual rebuttal, “Godfather II‘. And thus we are off to Italy with two hilarious men who travel to some famous and beautiful landmarks in Italy and discuss more or less the same things they did in the first film. 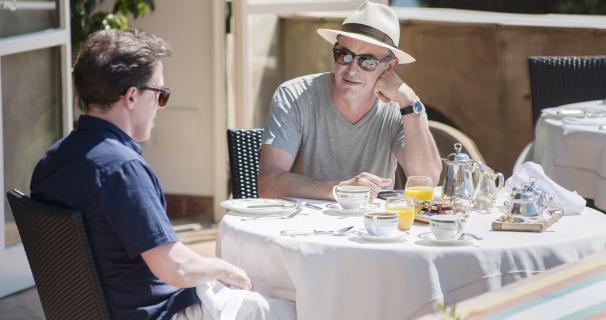 While eating and laughing on mouth-watering pastas and succulent meats, the two comedians do their best impressions of their fellow actors, by of course starting with Michael Caine in the recent ‘Dark Knight Rises‘ film, which in then turns to who can do the best Bane impression. It’s quite hilarious. Throughout the movie, the two friends who love to hate each other or hate to love each other consume most of their time talking about what great Italian films were filmed in the locations they currently in, rather it be ‘La Dolce Vita‘, ‘Contempt‘, ‘Roman Holiday‘, or ‘Beat The Devil‘, both Brydon and Coogan are both film aficionados.

When both of them ask their friend to give the ruling on who does the best Robert De Niro impression, my sides hurt from laughing so hard. But it’s not all movie talk. The two take a trip to the frozen dead people of Pompeii, drive their mini cooper to the sounds of Alanis Morissette, stay in luxurious hotels, and sail the open sea to their next destination, all the while reciting romantic poetry, discussing their current lives and job offers, as well as the narrative portion of the film where one gentleman takes a liking to one of the locals or where the other’s teenage son joins them on their voyage.

Running at two hours, ‘The Trip to Italy‘ seems a tad long, as talk about movies and who does the best italian impression gets old after aw while, but ultimately, this is a delicious trip worth taking, and I can’t wait to see where they travel next.