Comic-Con is a gathering of most of the best things in life. ‘Batman‘? Check. ‘Firefly‘? Check. ‘Game of Thrones‘? Check. ‘The Walking Dead‘? Let me tell you about this one. Not only did attendees for the WD panel get to interact with stars of the undead mega-hit for AMC, but they get a 5 minute sneak peek of the upcoming season 5. 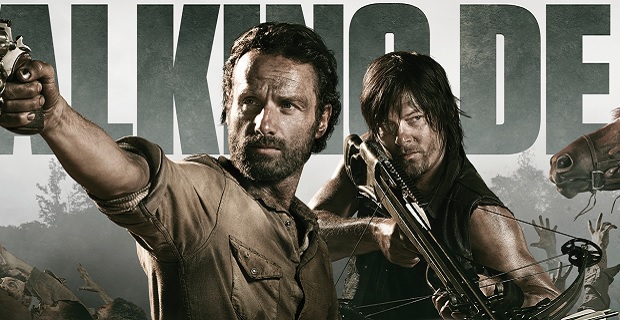 Looks like WD is trekking to Washington D.C. to find a cure for the whole zombie situation. “This is a season that is going to be pretty close to the comics”, said Robert Kirkman. The comic co-creator and series executive producer’s point was emphasized by fellow exec. producer Gale Anne Hurd. She hinted at some suburban locations and stated “you’ll see us take some big leaps with the characters and the set pieces” she said before the video was debuted. Of course I have the clip for you, you just have to read the rest of my spiel to get to it.

Fans were probably in a little bit of confusion when the video started rolling, because the panel began with a fake sitcom-like clip from episode 15 of the upcoming season 5 that showed an aged Rick Grimes and other characters with very long beards playing cards in the train car they were trapped in at the end of last season. “Sort of like Cheers at Terminus,” joked showrunner Scott Gimple.

‘Walking Dead‘ has never failed to impress the network with high viewer numbers. The premiere of last season hit an all-time high for the series with viewer records that smashed the previous record. Season 4 even beat the usual first place NFL a few times. The finale in March drew 15.7 million viewers and a majority of those were in the key demographic for a season ender record. One can only assume that the new season, which debuts October 12 at 9pm, will slaughter their previous records as masses of fans unite at one time to check out if the crew finds a cure or if the zombies eventually win. If you’ve read all the comics, you’re a step ahead of anyone that hasn’t, because previously stated, the show is going to follow the comic story line pretty closely.

If you’ve read this long, you deserve something special, here is the official Season 5 preview clip!

So, what did you guys think?