Firefly. I only need that one word to raise blood pressure, inspire hopes and in some cases, cause Mandarin curses through gritted teeth. Joss Whedon’s rag-tag group of soldiers, mechanics, a courtesan, a pilot, doctor and a preacher….and Jane, have burrowed into the depths of each and every Browncoat-loving fan. We curse Fox for their ignorance in airing the episodes incorrectly and then for canceling. With only one season in our grasp, we have sustained the furious fandom that we have, calling ourselves Browncoats.

Check out what one lucky con-goer discovered on the floor?  If I can’t see them be Big Damn Heroes, then I can be one, myself! 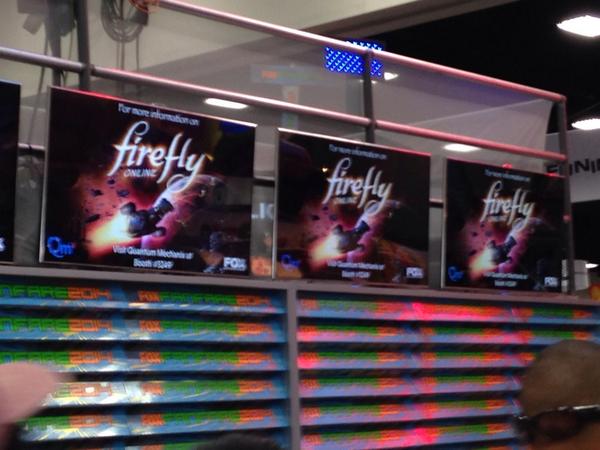 We had one season and a film and we are some of the most die-hard fans in the faniverse. I think I just made that up. Harry Potter fans, are great, Trekkies and Star Wars fans are all cool, but they haven’t suffered like we have. I think the only other group of fans that knows the agony of such obsession to have and such little material to work with are ‘Sherlock‘ fans. Seriously, we share your pain! It’s been off the air for more than a decade and the signal is still there.

We’ve learned that the entire, original cast of the space-western will all return to reprise their roles in an online game. Before you ask, yes, this includes Alan Tudyk, our ill-fated pilot, he’s going to play multiple characters, I’m hoping one of the characters is at least a dinosaur. Michael Fairman will also make an appearance as crime lord, Niska.

Obviously if you’re a proud Browncoat, you’re going to aim to misbehave, but now you can online!!!  Shout out, Browncoats, what’s the word? Shiny, right?