You might think it’s quite odd that Clint Eastwood directed a musical this year with ‘Jersey Boys‘, which is an adaptation of the Broadway stage play that is currently the 13th longest running show in history based on the careers of Frankie Valli and The Four Seasons, but you’d be wrong. In fact, Eastwood is very big in the music scene and always has been. You remember the film ‘Honkytonk Man‘ and ‘Bird‘, don’t you, which were both about musicians. And you can add to this the eight films he wrote and composed the music for. My point is that Eastwood is a solid choice for this great musical adapted into a feature film.

But the question is , how well does it transfer to film from the stage? Where ‘Jersey Boys‘ the film might lack in the glitz and glamour that you would find on stage, it makes up for in emotional depth as we jump from each point-of-view from each band-member throughout the 134-minute film, which in my opinion was about twenty minutes too long. ‘Jersey Boys‘ has a ‘Goodfellas‘ – light backdrop that follows a young Frankie Valli (John Lloyd Young) getting into trouble with his friends Tommy Devito (Vincent Piazza) and his brother Nick in early 50’s New York. They all do odd jobs for the local mob boss Gyp DeCarlo (Christopher Walken) by day and play in a band by night. It seems that everyone in the neighborhood, including the police know who young Valli is and constantly ask him, “Don’t you need to be home by 11”, when he’s out late? 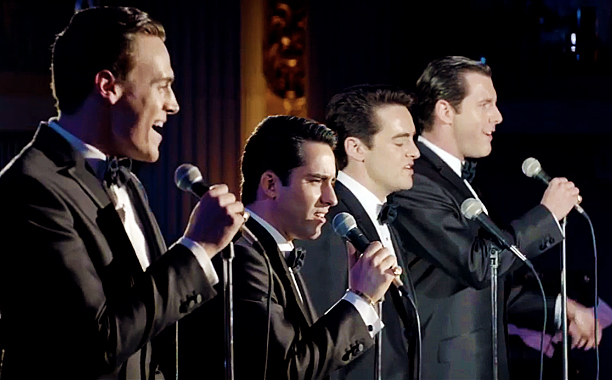 At home, his parents are good Italian working class people who have a framed picture of the Pope and Frank Sinatra paired together watching over Valli’s every move. With Valli’s impressive high pitched falsetto voice, people start to take an interest in their band called ‘The Four Lovers‘ as they are going from lounge to bar to bowling alley, performing their tunes, but they don’t seem to be cutting record deals yet. Since the Devito brothers can’t seem to stay out of jail for short periods of time, the band takes on Nick Massi (Michael Lomenda) as the bass player and things pick up. But it’s when Joe Pesci, yes that Joe Pesci, introduces Frankie, Nick, and Tommy to Bob Gaudio (Erich Bergen), a writer and musician, where the band really takes off. Gaudio previously wrote the hit tune ‘Short Shorts‘ that previous summer, and was known to be a class act. Tommy, the band’s self made manager whose temper is fire hot, eventually agrees to bring on Bob, and when they do the hits roll in including ‘Sherry‘, ‘Big Girls Don’t Cry‘, ‘Walk Like A Man‘, ‘Rag Doll‘, and ‘I Can’t Take My Eyes Off You‘. All of these were #1 hits and provided the band with big money and concerts, and television appearances.

They even changed their name to ‘The Four Seasons‘. But while the band was doing well, Tommy was secretly spending their hard earned money on gambling and becoming increasingly in debt with the mob. Needless to say, it was a rocky road for ‘The Four Seasons‘, despite all of their money and fame, but all are still alive and well and eventually reunited for their induction in to the music hall of fame in the early 90s. Eastwood did a great job of showing us the more dramatic and emotional moments with each character, followed by a fun and energized scene or two of their big musical accomplishments that actually had people clapping and dancing in synch with the songs throughout the film. 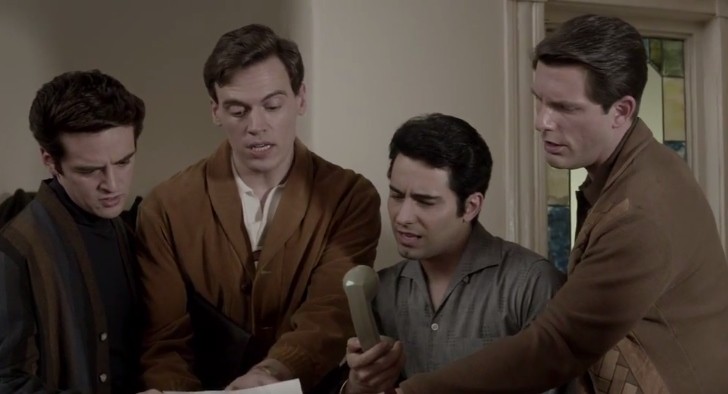 And let me also credit Eastwood for hiring Young and Lomenda for these roles, as they were the original Broadway actors for the first run on stage. And they pull it off flawlessly. Young’s Valli is pitch perfect and spot on, never missing a beat, while the others fall into place. And Piazza (whose known as Luciano from HBO’s ‘Boardwalk Empire‘), pulls out a great performance as the hot-tempered band-mate, but he gives his character Tommy Devito (Joe Pesci’s character name from ‘Goodfellas‘) so much charm and wit, that it’s easy to see why Frankie always stood by his side no matter what kind of trouble he got into.

However, Eastwood is also known for having a slower-than-desired pacing with his films, and this one is no different. There are a few scenes that could have been cut out that while they offered some emotional depth to some of the characters, they were not given the proper amount of set-up time to make us grieve and didn’t go with the basic story he was trying to tell. But other than that, ‘Jersey Boys‘ the film is a solid gold hit. And the end credit scene with the Broadway vibe and dance routine was outstanding. I only hope the younger generation takes to this film and appreciates the music.