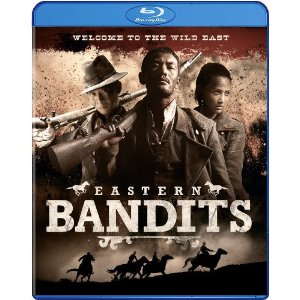 If films had Attention Deficit Hyperactivity Disorder (ADHD), then ‘Eastern Bandits‘ would be diagnosed with a severe case of it. I’m not saying that it’s a horrible thing, but it definitely takes away from the main focus of the film and it tends to stray into some ridiculous sub-plots throughout 107-minute run time. The film is billed as a Western meets Martial Arts type of movie. Well you can add comedy, heist, and whacky to that mix as well.

Director Yang Shupfeng seemed like he wanted to add all of his favorite aspects from film into this one movie, as I guess he thought it would be his last. There are some very good moments in the film, but more often than not, things get a little out of control and leave us confused rather than trying to figure out what is happening next. The film starts off with with an evil Japanese man, General Zhao (Waise Lee), who jokes with a photographer about assassinating the prince.

But the laughs quickly die when Zhao pulls a gun on the photographer, only to have a few more people stand up and point guns at Zhao as well. And then one of many flashbacks occur that shows just how everyone got to this moment. The photographer is Fang (Xiaoming Huang), a leader of a gang with his sister Jen (Xinyi Zhang), and Gao (Yi Zhang), who is an undercover agent who has made his way into the gang of bandits. This posse wants to destroy the relationship between the Chinese and Japanese by kidnapping and killing the prince. For fun, these bandits dress in baby doll masks and rob a bank, which they tend to give some of the money to the poor and keep some for themselves.

It seems like this segment was thrown in to speed things up, but made no real sense of being in there. Another thing that is confusing with the film is when we enter into a flashback, there isn’t really anything to tell us we are in a flashback, as it could be easily present day. This happens on more than one occasion. There is a good chunk of the film that dives into how each character became part of this bandit-gang, which would be cool, but then there was the weird bank robbery, and a strange love affair between Jen and Gao. And these bandits are supposed to be likable, but when they go from joking around with each other to extremely violent in a second, it’s difficult to relate.

There are a few sequences that seem cartoonish, but when some of the violence comes on-screen, it’s very realistic. ‘Eastern Bandits‘ can be a fun movie if you know what you’re getting into before you watch it. Shupfeng’s camera doesn’t always capture the action scenes as well as I’d like to see, while at other times, he does an impressive job. Like the movie, the camerawork is all over the place.

‘Eastern Bandits’ comes with a 1080p HD transfer is presented in 2.35:1 aspect ratio. Since this is trying to be some kind of Western film, the colors have been changed to give that orange-yellow tint throughout to make it seem rustic. The colors don’t ever seem to pop off-screen to vibrantly, but look decent none-the-less. The detail is quite sharp and surprisingly vivid. Closeups revealed individual hairs on the actor’s face, make up blemishes, scars, and intimate stitching in the costumes. In some of the wider shots, depth is clear and great. The black levels seem deep and inky and the skin tones are natural. This is a better than average video presentation.

This release comes with a lossless DTS-HD 5.1 audio mix and is quite good. The gun battles, explosions, and heavier actions scenes are all loud and robust and get a good use of each surround speaker. The dialogue is crystal clear and easy to follow, and is free of any instances of popping, cracking, and hissing. The sound effects full immerse you in the film with gun shots going off around you with power and explosions rattling the walls with bass. The LFE is good, but not excellent and the dynamic range is quite wide. The score mixes some modern and tradition music throughout and always adds to the tone of the film, which is to say the least – whacky. Great audio presentation here.

Trailer (2 mins.) – Trailer for the film

‘Eastern Bandits‘ is a fun movie, but it goes off on so many tangents and ultimately doesn’t know what type of movie it wants to be in the end. But you can’t say it’s not entertaining, because it definitely is that. The video and audio presentations are both very good, but the extras are lacking on this disc, garnering only a trailer. If you are a fan of the martial arts genre and enjoy your asian film being a little whacky from time to time, then by all means get this Blu-ray.