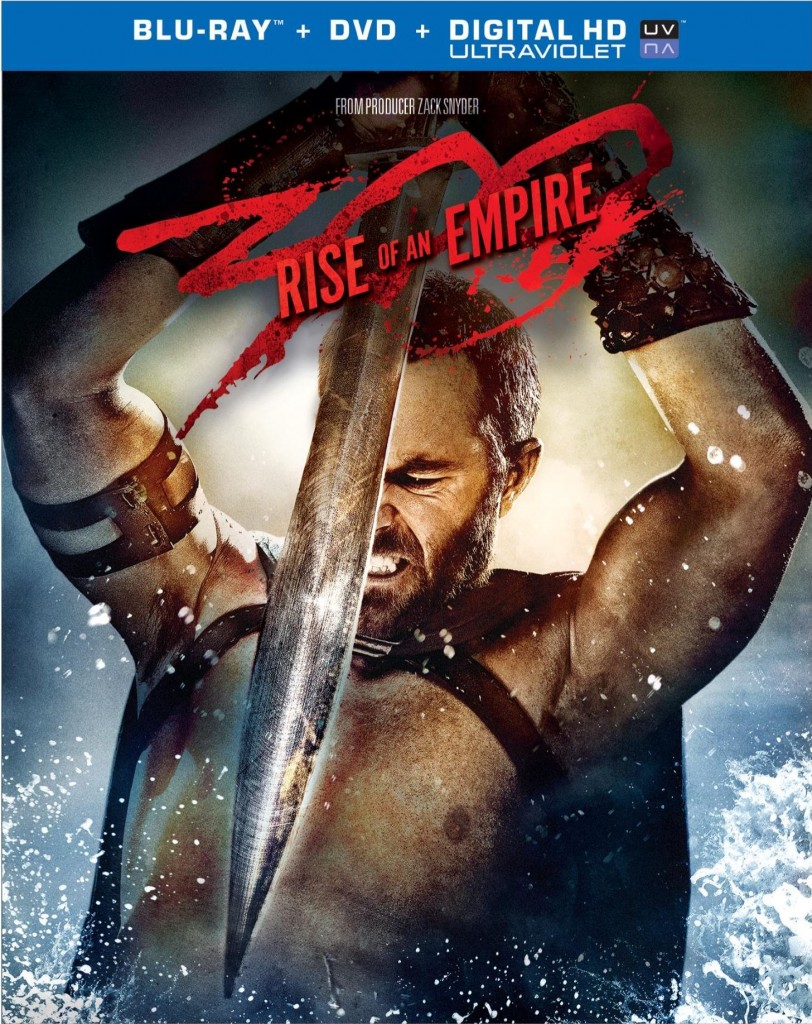 You would think that by the look of ‘300: Rise of an Empire‘, the sequel to the 2006 hit film ’300′, director Zack Snyder had returned to make this film. Well, you’d be wrong as Noam Murro directed this, making this film his first feature film. But don’t worry, Snyder seemed to have a heavy hand and watchful eye over this film, as his handprints are all over this from his screenplay to the camerawork. It’s all here again in this prequel, side story, and sequel that features a lot of the same characters from the original. ’300′ cost $65 million to make back in 2006 and was largely made in front of a green screen. That film grossed over $457 million dollars.

While I doubt this sequel will do that well, I anticipate it making a solid dent in the box office during its run, which it did, making a great $330 million. Unfortunately, Frank Miller didn’t have much to do with this sequel, but it was based on his unreleased book called ‘Xerxes‘. The film starts out right where the last one left off, with Leonidas (Gerard Butler) laying dead with his 300 Spartans, as Xerxes (Rodrigo Santoro) is marching forward with his giant army to destroy Greece.

However, we get a prequel story of sorts about how this whole war got started, which sheds a little light on the Persian side of things. One might say that the Greeks were the ones to blame. But we see Themistokles (Sullivan Stapleton) lead his Athenian army to destroy a group of Persians looking to settle on land. Themistokles shoots his trusty arrow into King Darius, Xerxes’ father. Xerxes, a plain man sees this and is completely devastated as the Persians retreat back to their home. You’d think that Xerxes would become the evil man he became because of this, but that’s not the case, for there was someone behind the shadows who told him lies and filled his head with evil thoughts that caused him to take his journey and destroy the human side of himself and become the God-King we saw in ‘300‘.

That person is Artemisia (Eva Green, excellent), a young orphan girl who was found by someone very familiar, who Leonidas kicked into a bottomless black pit after he yelled ‘This is Sparta!” Artemisia was looked after and trained by this man and King Darius. When the King was killed, she vowed to kill every last Greek on the planet and told Xerxes to do the same, despite what the King said on his deathbed, which was essentially to keep the peace. Come to find out, Xerxes takes a backseat throughout this whole film, as he only serves as the face of Artemisia’s movement, while Artemisia calls all the shots. If it wasn’t for Artemisia, maybe Leonidas would still be alive and Xerxes would be a peaceful human being.

Meanwhile, Themistokles heads to Sparta to unite all of Greek in a war against the Persians, but Queen Gorgo (Lena Headey) informs him that her husband Leonidas and 300 of his men journeyed out to fight themselves, leaving Themistokles and his army of men, who aren’t necessarily soldiers to fight thousands upon thousands of Persians on the rough Greek waters. So basically, this story takes place as Leonidas and his 300 men army are killing the Persians on land during part one.

The best part of the film by far is Eva Green. Her Artemisia is quite amazing. She is such a tortured soul, but holds nothing back and shows no mercy to her enemies and even her own army. And in an epic sex scene between her and Themistokles, which is awkward, funny, and rough, you can’t help but see her anger and betrayal in all of her body. She really is the ultimate badass, even if she is an evil badass. The fight scenes are very similar to the first film with tons of slow-motion mixed with real-time as each spear and knife makes contact with skin. This time though, no matter how deep the cut or decapitation, a gallon of red blood spews on the camera in 3D.

Speaking of the 3D, this is some pretty spectacular 3D. It seems that they hired a giant team to create dust and sand in 3D throughout the film. There is so much depth, image wise, that it might be some of the best 3D put on film. For this being Murro’s first feature film, it didn’t seem like he had free reign to do what he wanted with it, because it seems like Snyder took over for a lot of the shoot. ‘300: Rise of an Empire‘ is a solid sequel that has everything you want in a ‘300‘ sequel from nudity to blood to epic fight sequences. If you were a fan of the first movie, then you’ll definitely enjoy this sequel.

‘300: Rise of an Empire‘ comes with a demo worthy 1080p HD transfer and is presented in 2.40:1 aspect ratio. To put it lightly, this video presentation is outstanding and could be your demo disc you show to friends when they come over to check out just how cool an action movie like this looks on your new system. The detail is flawless and shows the tiniest of details throughout. Closeups reveal each and every hair on the actor’s faces while you can see every splinter of wood in their spears. You can see every tiny bubble of blood that is sprayed across their bodies and faces, as well as dirt and debris that mucks up their swords and shields. You would think that during the heavier action scenes, night time scenes, and wide shots that the detail and image goes soft. Well I’m here to tell you that it doesn’t. It’s perfectly crystal clear. From the metal swords to the glowing embers of dust in the backgrounds of every scene, you will be able to make out every single detail, and it gives the image a lot of depth as it was filmed in 3D, so it looks amazing – depth wise. Colors have been de-saturated to give it that old Greek feeling like the first ‘300’ did, but this time around there are more blues and and golds without any of the aliasing, heavy grain, or banding. Colors simply pop off the screen, especially when blood literally hits the camera lens. There is a very fine layer of grain to give it a filmic look and not a polished pristine digital look, but more raw. The black levels are very deep and inky with the skin tones looking very natural. There were no signs of aliasing, banding, or any other compression issues to  speak of. This video presentation is DEMO QUALITY.

This release comes with an equally DEMO QUALITY lossless DTS-HD 7.1 audio mix. This audio track is powerful, immersive, and fun. The walls will rattle, the pillars will shake, and your bones will jangle as this one hell of an impressive sound escapes your speakers. Dialogue is always crystal clear and easy to understand with no evidence of any pops, cracks, or hissing. The sound effects roar and make you feel like you are in the heat of battle. You will hear every ship smash into each other, every sword clank, every piece of flesh sliced, and every arrow pierce bone here. You get the full works with this soundtrack as nothing is spared. The ambient noises of wind, waves crashing, men hollering, and weapons being swung sound robust and just pour from each speaker constantly. The directionality is quite impressive as well here. Explosions rattle walls with great intensity as the soundtrack mixes heavy metal with a classic score to add to each tone and mood of the film perfectly, while never drowning out any of the dialogue or sound effects. The LFE is perfect and the dynamic range is extremely wide. Again, this audio presentation is DEMO QUALITY.

Behind the Scenes: The ‘300’ Effect (HD, 30 minutes) – Here are four different segments that talk about making this sequel film. There are plenty of talking head interviews from the cast and crew along with Frank Miller and Zack Snyder here who talk about the ideas for the film, its origins, the casting, filming, and deciding to film on the water.

Real Leaders & Legends (HD, 23 minutes) – This is an excellent extra in which some of the film’s crew along with some actual historians discuss every character in the film and how they relate to the real life battles and people in history. They also lay out the differences and the similarities in each battle form the real ones in history. Very cool bonus feature.
Women Warriors (HD, 12 minutes) – Here is a look at Eve Green as Artemisia and Lena Headey as Queen Gorgo and how they were portrayed and looked.
Savage Warships (HD, 11 minutes) – This extra dives into the shops that were used, the war strategies, and the technology that was used by the Greeks and Persians during this war in history. You also get a glimpse at some of the sets that were built here too.
Becoming a Warrior (HD, 5 minutes) – Here you will see how the cast gets those rock-hard bodies as they train, exercise, lift weights, and train for their roles.

‘300: Rise of an Empire‘ is a fun and solid sequel. It’s bloodier than the first with some epic action sequences and one hell of a sex scene. Plus I love how we get the origin stories of some of our heroes and villains as well as what was happening as King Leonidas was fighting the Persian army with his 300 body guards. The video and audio presentations are DEMO WORTHY here and the extras are quite good too. If you’re a fan of these ‘300‘ films, then ‘Rise of an Empire’ is a MUST-OWN!