The Original 1954 ‘Godzilla’ Film Will Be Shown At The Angelika Dallas!! 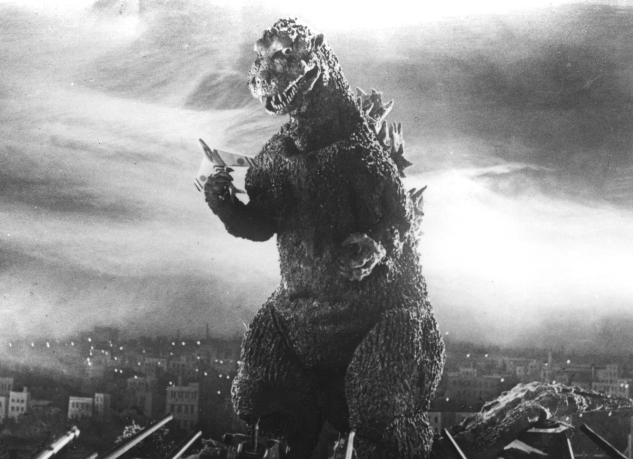 MAN IN SUIT! MAN IN SUIT! MAN IN SUIT! In anticipation of what seems like the biggest movie of the year ‘Godzilla‘, the good folks over at the Angelika will be showing the original 1954 film that started it all. This print is newly remastered and restored and is quite possibly the same transfer of the recent Criterion release, which was phenomenal. You won’t want to miss this, so be sure to get your tickets!

Official Press Release: A new restoration of GODZILLA: THE JAPANESE ORIGINAL, the monster classic that has spawned six decades of sequels, imitations, and remakes, debuted April 12 at the fifth TCM Classic Film Festival in Hollywood will open Friday, May 9 exclusively at the Angelika Film Center in Dallas.

GODZILLA was originally released here in 1956 as Godzilla: King of the Monsters, an atrociously cut, dubbed and re-edited version that inserted American actor Raymond Burr into the action; only an hour was used of the original’s 98 minute running time. Burr does not appear in the original, uncut version, which has an all-Japanese cast including Kurosawa regular Takashi Shimura, who the very same year appeared as leader of the Seven Samurai.

As directed by Ishirô Honda, with special effects by the legendary Eiji Tsuburaya, GODZILLA: THE JAPANESE ORIGINAL is much darker in tone than the dumbed-down U.S. release version, which entirely eliminated the original’s underlying theme. In the Japanese version, the monster is clearly a metaphor for the nuclear menace and the film itself a cry for world peace and disarmament. The American version also cut out all of the original’s astonishing Strangelove-like black humor.

The original GODZILLA holds up as one of the greatest science fiction/monster films ever made, boasting still-impressive special effects, as the radiation-breathing prehistoric monster, awakened after millennia by Hydrogen Bomb testing – and impervious to repeated shelling by the Japanese army – wreaks destruction on Tokyo.

GODZILLA became Toho Studio’s #1 box office hit of 1954 (its #2 that year was Seven Samurai) and was so popular worldwide that the company has since produced nearly 30 sequels and remakes; a statue near Toho headquarters in Tokyo pays tribute to their most valuable property. In 1984, the prestigious film journal Kinema Junpo rated it among the top 20 Japanese films of all time. In 1989, a published survey of 370 Japanese movie critics, Nihon Eiga Besuto 150 (Best 150 Japanese Films), ranked Godzilla the 27th greatest Japanese feature ever made.