The Entire ‘Halloween’ Film Collection is Coming To Blu-Ray In Time For Halloween!! 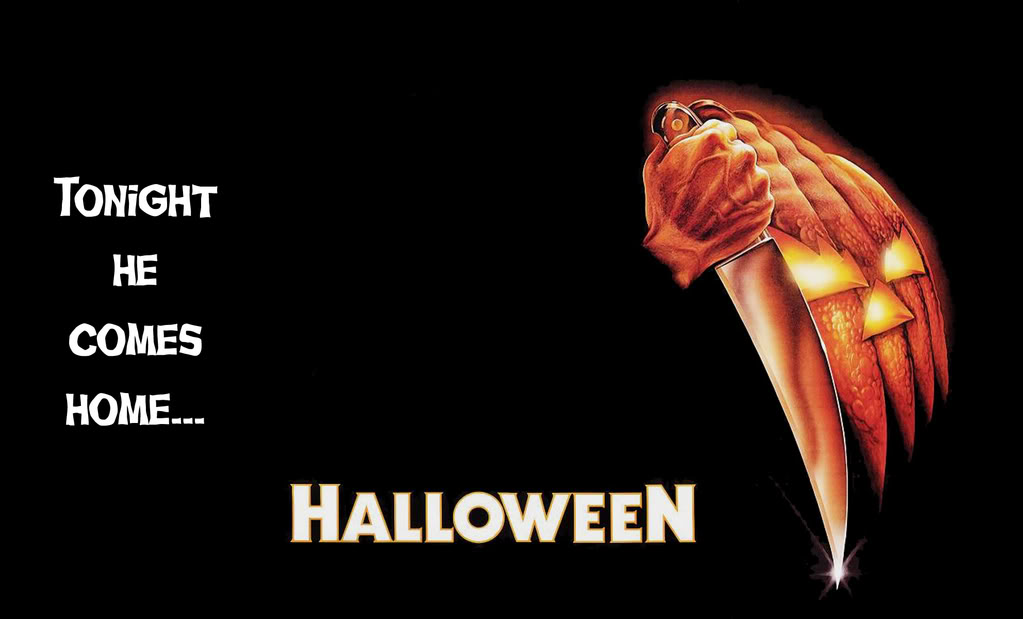 Good news, everyone. Anchor Bay Entertainment and Scream Factory have finally partnered up to give us horror fans something we have wanted for far too long. Not one but two different Blu-Ray box sets that spans all of the ‘Halloween‘ films. There will be tons of new bonus features, every film in high-definition, collectible packaging, and a 40-page Booklet. You can expect this amazing set in time for Halloween season, specifically on September 23rd. It’s about time they did this, because Friday the 13th and A Nightmare on Elm Street already have box sets. Glad to see ‘Halloween‘ is catching up with everyone else. Now if we can just get that ‘Phantasm‘ box set to release in the US instead of the UK, all will be well.

Official Press Release: Last year, the horror classic Halloween celebrated 35 years of terror for those willing to partake in its vision of unrelenting horror. But that was only the beginning of the celebration. What producers Moustapha Akkad, Debra Hill and Irwin Yablans, writer/director John Carpenter and stars Jamie Lee Curtis & Donald Pleasence started in 1978 has transformed into one of the most durable, iconic – and copiously studied — horror film franchises ever created. Before Jason, before Freddy, and before Jigsaw, there was…Michael.  Over the years, audiences have lived and relived the terrors of Michael Myers through ten feature films, as well as various re-edits and alternate versions. Yet to date, the complete saga of Michael Myers could only be told in pieces, in individual DVD and Blu-ray™ releases, with the rights spread across multiple home entertainment studios. Through the unprecedented collaboration of rival home entertainment companies Anchor Bay Entertainment and Scream Factory – the leading purveyors in horror home entertainment –Halloween The Complete Collection Blu-ray™ box sets arrive September 23rd.

“This compilation is the ultimate collector’s item for fans of the Halloween films and a testament to all the wonderful talent that have worked on them,” remarked Malek Akkad, President of Trancas International Films and son of series producer Moustapha Akkad.  “The partnership between Anchor Bay Entertainment and Scream Factory to present fans for the first time with all the Halloween films in one definitive package is a tribute to everyone – including my father – who made these films the terrifying classics they are today.”

The 10-disc Edition includes the original theatrical versions of the Halloween films and will include select bonus features.  SRP is $129.99  Halloween The Complete Collection Blu-ray™ box sets contain the following classics: 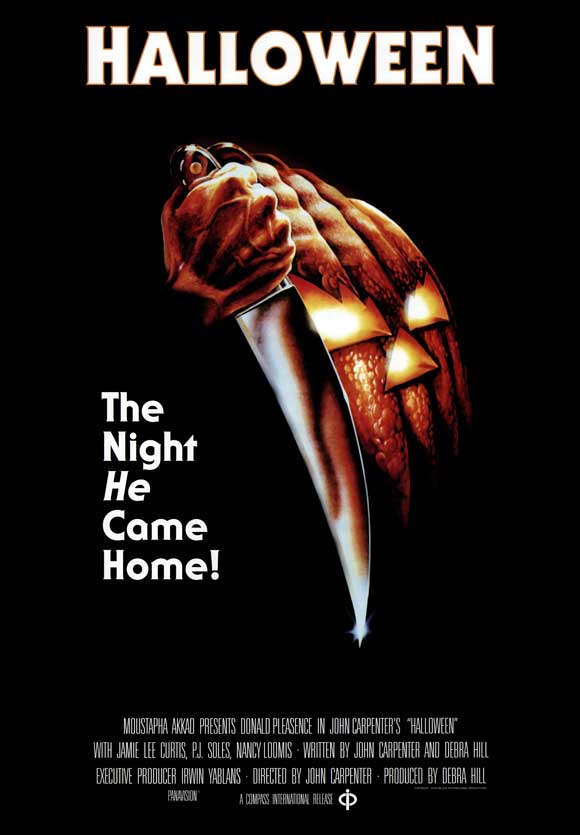 The original indie blockbuster that launched a thousand cuts…Halloween stars Jamie Lee Curtis (A Fish Called Wanda, True Lies) in her debut role. Anyone who’s ever watched a horror film in the last 35 years knows the story of Michael Myers, who as a child, butchered his sister with a kitchen knife. Committed to a mental institution and watched over by Dr. Loomis (Donald Pleasance, Halloween II, IV & V, Fantastic Voyage), he engineers his escape 15 years later, returning to his hometown of Haddonfield, Illinois on Halloween night to terrorize anyone who gets in his way, including babysitter Laurie Strode (Curtis). Co-starring P.J. Soles (Carrie, Stripes, Rock ‘n Roll High School), Kyle Richards (The Watcher in the Woods, Eaten Alive), Nancy Loomis (Carpenter’s Assault On Precinct 13, The Fog), Charles Cyphers (Escape From New York, The Fog) and Brian Andrews (The Great Santini, Three O’Clock High), Halloween also cemented the careers of many behind the camera including Carpenter, Cundey, producer Debra Hill and film editor/production designer Tommy Lee Wallace (Halloween III: Season of the Witch, “It”). 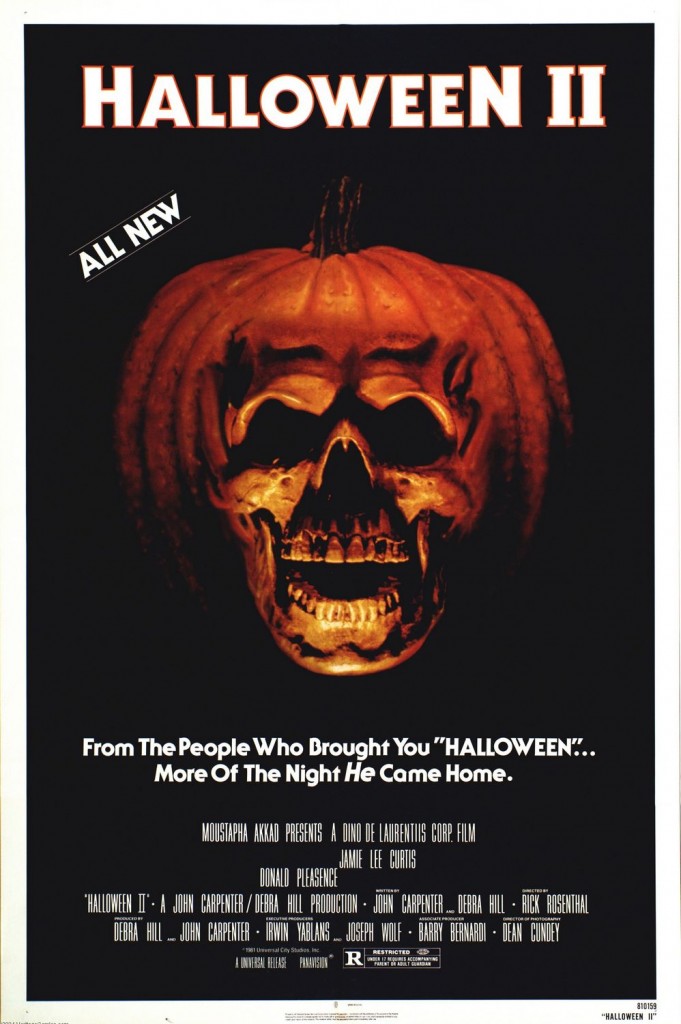 Picking up exactly where the first film left off, Halloween II follows the same ill-fated characters as they once again encounter the knife-wielding maniac they thought they had left for dead. It seems the inhuman Michael Myers is still very much alive and out for more revenge as he stalks the deserted halls of the Haddonfield Memorial Hospital. As he gets closer to his main target, Dr. Loomis (Donald Pleasence) discovers the chilling mystery behind the crazed psychopath’s actions. Written by John Carpenter and Debra Hill, Halloween II is a spine-tingling dark ride into the scariest night of the year.

Airing on network TV since the early 80’s, the TV cut features several new scenes and additional cut scenes as well as an alternate ending from the theatrical version. 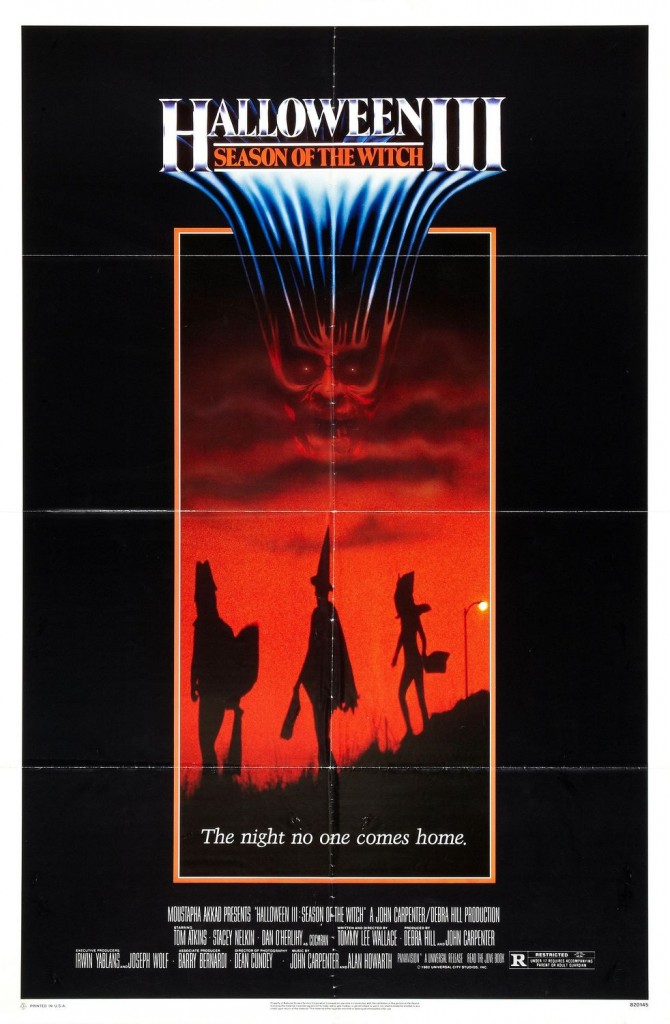 When a terrified toy salesman is mysteriously attacked and brought to the hospital, babbling and clutching the year’s most popular Halloween costume — an eerie pumpkin mask — Dr. Daniel Challis (Tom Atkins, The Fog, Night Of The Creeps) is thrust into a terrifying Halloween nightmare. Working with the salesman’s daughter, Ellie (Stacey Nelkin), Daniel traces the mask to the Silver Shamrock Novelties company and its founder, Conal Cochran (Dan O’Herlihy, RoboCop). Ellie and Daniel uncover Cochran’s shocking Halloween plan and must stop him before trick-or-treaters across the country are kept from ever coming home in this terrifying thriller from writer/director Tommy Lee Wallace (Stephen King’s It). 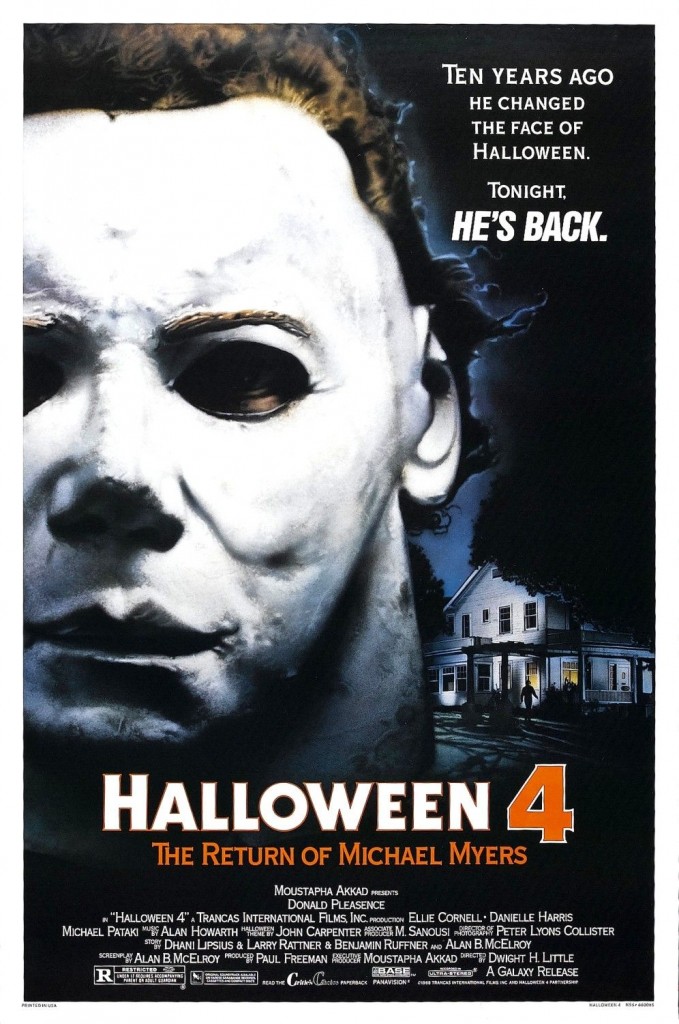 A decade ago, he butchered 16 people trying to get to his sister. He was shot and incinerated, but still the entity that Dr. Sam Loomis (the legendary Donald Pleasence) calls “Evil on two legs” would not die. Tonight, Michael Myers has come home again…to kill! This time, Michael returns to Haddonfield for Jamie Lloyd (Scream Queen Danielle Harris of Halloween 5 and Hatchett II and III) – the orphaned daughter of Laurie Strode – and her babysitter Rachel (Ellie Cornell of Halloween 5 and House of the Dead). Can Loomis stop Michael before the unholy slaughter reaches his innocent young niece? Michael Pataki, Sasha Jenson and Kathleen Kinmont co-star in this smash sequel that marked the long-awaited return to the original storyline and remains infamous for its startling twist ending and graphic violence. 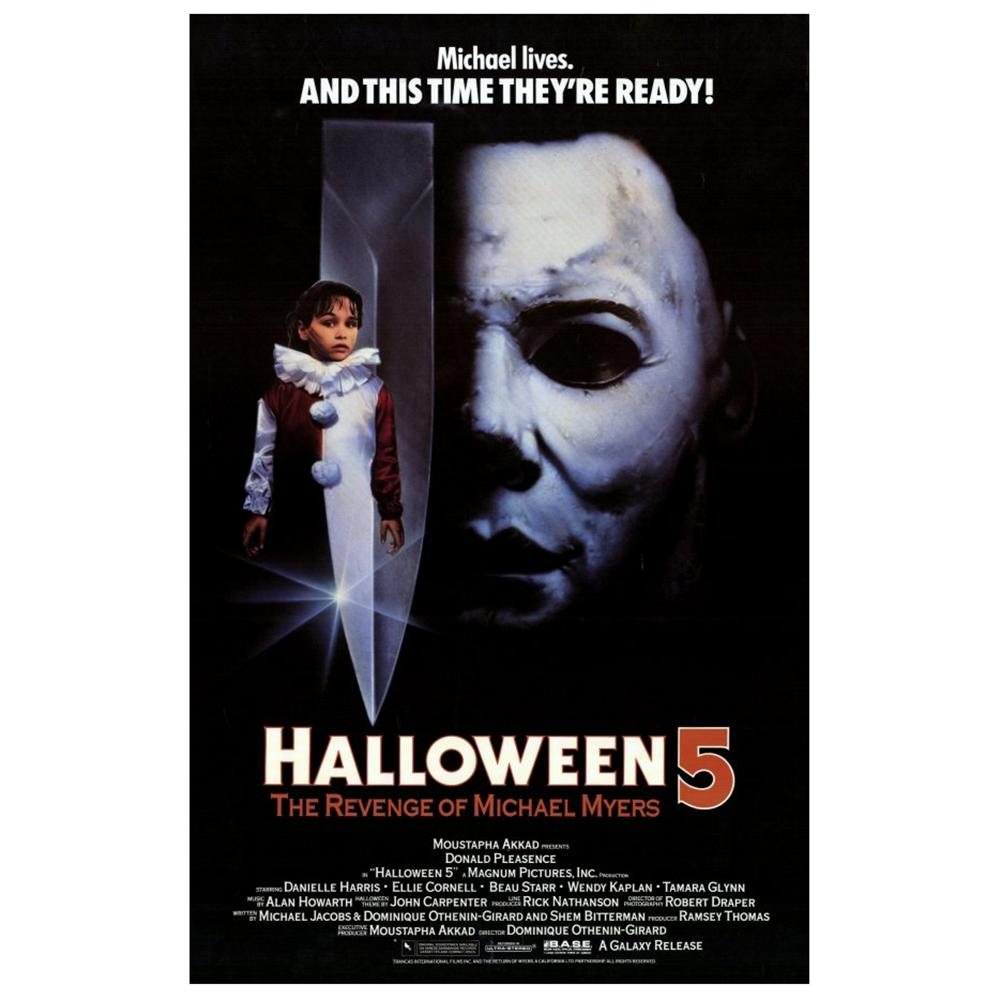 Because Hell would not have him, Michael Myers survived the mine explosion thought to have killed him. One year later, his traumatized young niece Jamie (Danielle Harris of Halloween 4) is horrified to discover she has a telepathic bond with her evil Uncle…and that Uncle Michael is on his way back to Haddonfield. But Dr. Loomis (the late, great Donald Pleasence) has a new plan to destroy The Boogey Man in his childhood home using Jamie as bait. Tonight, the carnage begins again: Michael Myers is back with a vengeance! Ellie Cornell and Beau Starr return for this hit sequel that features grisly gore by Greg Nicotero (“The Walking Dead”). 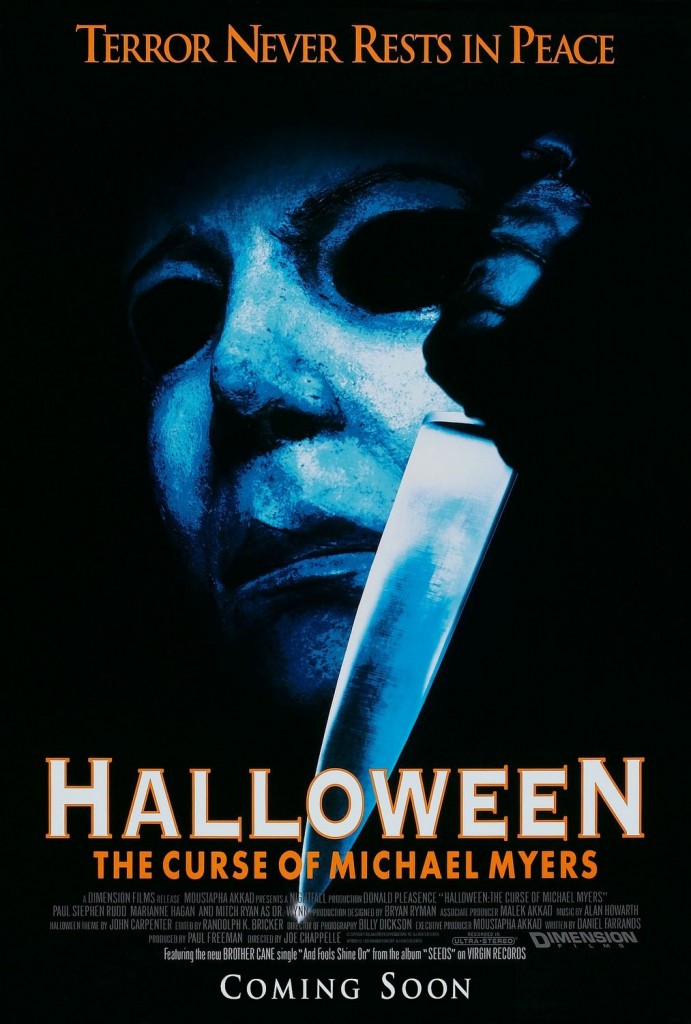 Halloween: The Curse of Michael Myers (1995)

In a single horrifying night, Michael Myers’ masked reign of terror changed Halloween forever! Now, six years after he was presumed dead in a fire, Myers has returned to kill again – and this time there’s no escape! As the homicidal fury builds to a spine-tingling climax, the long-hidden secrets of the screen’s most maniacal murderer are revealed…with shocking results! Starring a thrilling cast including legendary Donald Pleasence (Halloween) and Paul Rudd (Anchorman).

Exclusively on the Deluxe Set Halloween: The Curse of Michael Myers (1995)Producer’s Cut

The so-called “Producer’s Cut of Halloween 6: The Curse of Michael Myers (aka Halloween 666), was a workprint of the original film. 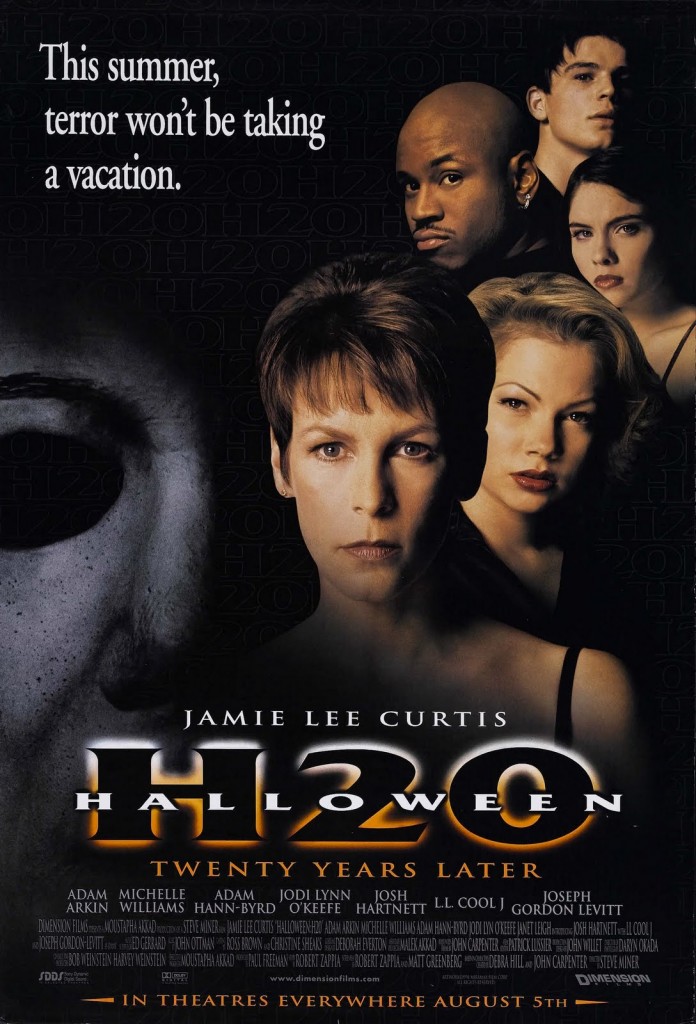 This smart and suspenseful thriller scares up a bone-chilling good time with original scream queen Jamie Lee Curtis (True Lies, Halloween I & II) and a hot cast of hip young stars! Now the headmistress of a private school, Laurie Strode (Curtis) is still struggling with the horrifying, 20-year-old memories of the maniacal killer Michael Myers…when he suddenly reappears with a vengeance! And this Halloween, his terror will strike a whole new generation! Laurie’s rebellious son (Josh Hartnett – The Faculty, 30 Days of Night), his girlfriend (Golden Globe Winner Michelle Williams – My Week with Marilyn), and the school security guard (LL Cool J – CBS’s “NCIS Los Angeles” will become Michael’s newest victims unless Laurie can conquer her greatest fears and put evil in its place once and for all! The time has come again for you to experience the frightening fun of Halloween – the motion picture series that totally redefined terror. 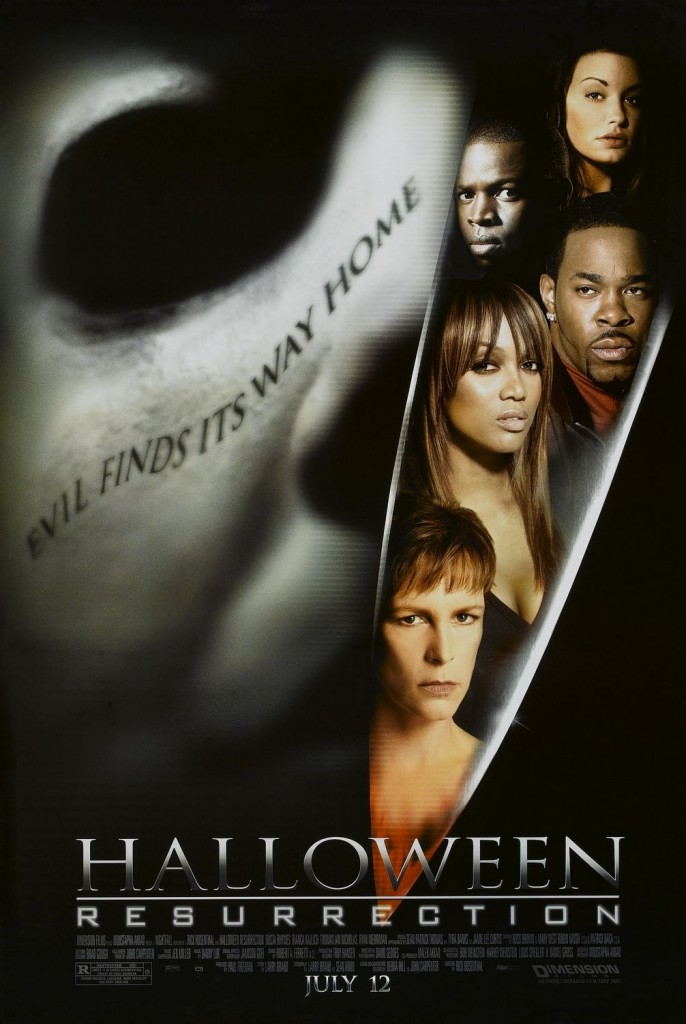 Original Halloween I & II alums star Jamie Lee Curtis (You Again) and director Rick Rosenthal are back and joined by Busta Rhymes and Tyra Banks in the terrifying Halloween: Resurrection, another installment in the electrifying horror film series.  The reality programmers at DangerTainment (Rhymes, Banks) have selected Rudy (Sean Patrick Thomas, The Fountain), Bill (Thomas Ian Nicholas, American Pie), Jen (“Battlestar Galactica’s” Katee Sackhoff) and a group of thrill-seeking teenagers to spend one fun-filled night in the childhood home of serial killer Michael Meyers. But the planned live broadcast turns deadly when their evening of excitement becomes a night of horror as Michael himself decides to crash the party. 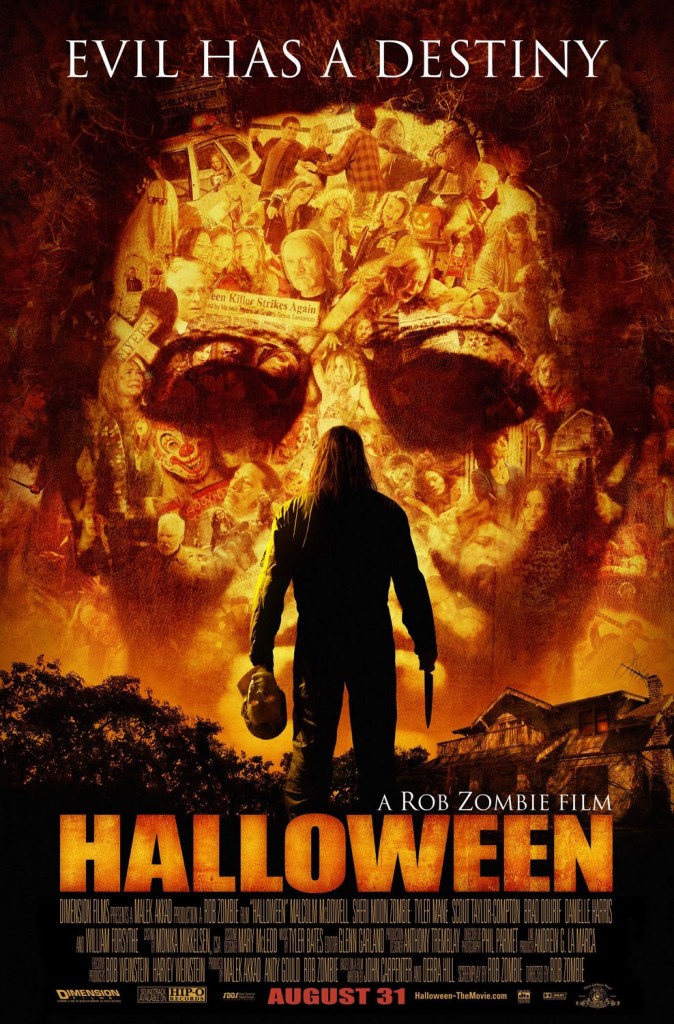 What happens when one legendary horror filmmaker tackles a horror film icon? A new chapter in the legend is born! Rob Zombie (Lords of Salem, The Devil’s Rejects) reinvents the ultimate slasher classic, unleashing Michael Myers for a bloody rollercoaster of a rampage like fans have never seen. Including a retelling of the original story that unfolds at a breakneck pace, as well as a chilling new introduction that finally reveals the secrets behind Myers’ disturbing childhood, Halloween breathes new life into one of film history’s most terrifying tales. Presenting both the original theatrical version and the unrated feature with director’s commentary, thrilling bonus features including deleted scenes and an alternate ending, and an exhaustive 4 1/2 hour documentary giving a behind the scenes look at how Zombie created “the scariest Halloween to date” (Debbie Rochon, Fangoria Radio). 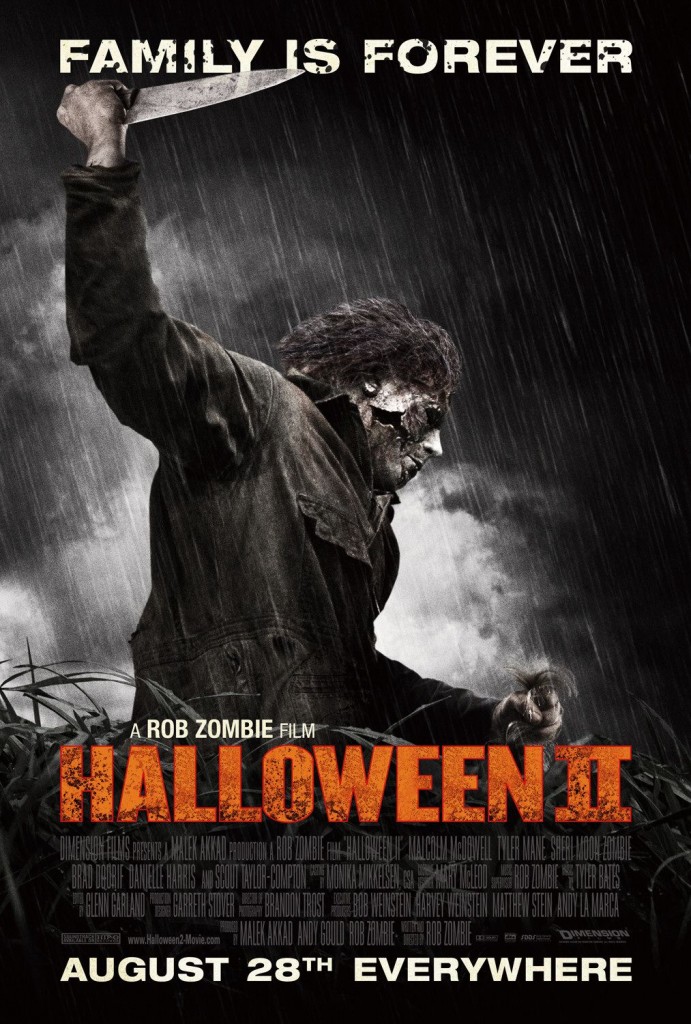 Rob Zombie’s H2 (Halloween) picks up at the exact moment that 2007’s box-office smash, Halloween stopped and follows the aftermath of Michael Myers’s (Tyler Mane) murderous rampage through the eyes of heroine Laurie Strode (Scout Taylor Compton). Evil has a new destiny. Michael Myers is back in this terrifying sequel to Rob Zombie’s visionary re-imagining of Halloween which grossed almost $80 million worldwide. It is that time of year again, and Michael Myers has returned home to sleepy Haddonfield, Illinois to take care of some unfinished family business. Unleashing a trail of terror that only horror master Zombie can, Myers will stop at nothing to bring closure to the secrets of his twisted past. But the town’s got an unlikely new hero, if they can only stay alive long enough to stop the unstoppable.