Succulent dishes, funny men, beautiful women, and the cutest kid you’d ever want to meet make ‘Chef‘ sound like a win-win, right?  Well ‘Chef‘  is all of that and then some.  Written, directed, and starring Jon Favreau, ‘Chef‘ is a delicious and punchy comedy.  Set in present day, Carl Casper (Favreau) is a man in the perfect profession as a chef, because he lives for the culinary creations.  However, Carl’s creative mind is imprisoned, which goes hand-in-hand when working for a controlling and condescending restaurateur, Riva (Dustin Hoffman).

Riva wants Carl to cook a menu that he has prepared for ten years with no deviations, but Carl wants to explore.  Can we say occupational ball and chain?  While Carl raced to appease his boss, he grew further and further distant from his son, Percy (Emjay Anthony), and former wife, Inez (Sofía Vergara).  Enter “The Food Critic”, Ramsey Michel (Oliver Platt), and his world is turned upside down.  Carl completely scraped his fresh, new menu ideas and prepared the regular menu under duress from Riva.

Michel’s online review rips Carl a new one, so Carl challenges Michel to try his culinary delights on Twitter.  The Twitter challenge goes viral and the restaurant is packed to see what happens next.  Riva seeks to control Carl with his regular boring already declined menu, but this time Carl pushes back and he stands up for his creative talents.  How does Riva take it?  Carl loses his job and most of his staff who cannot walk away from the restaurant. But not all is lost. With the help of his ex, Inez, Carl goes back to this roots. 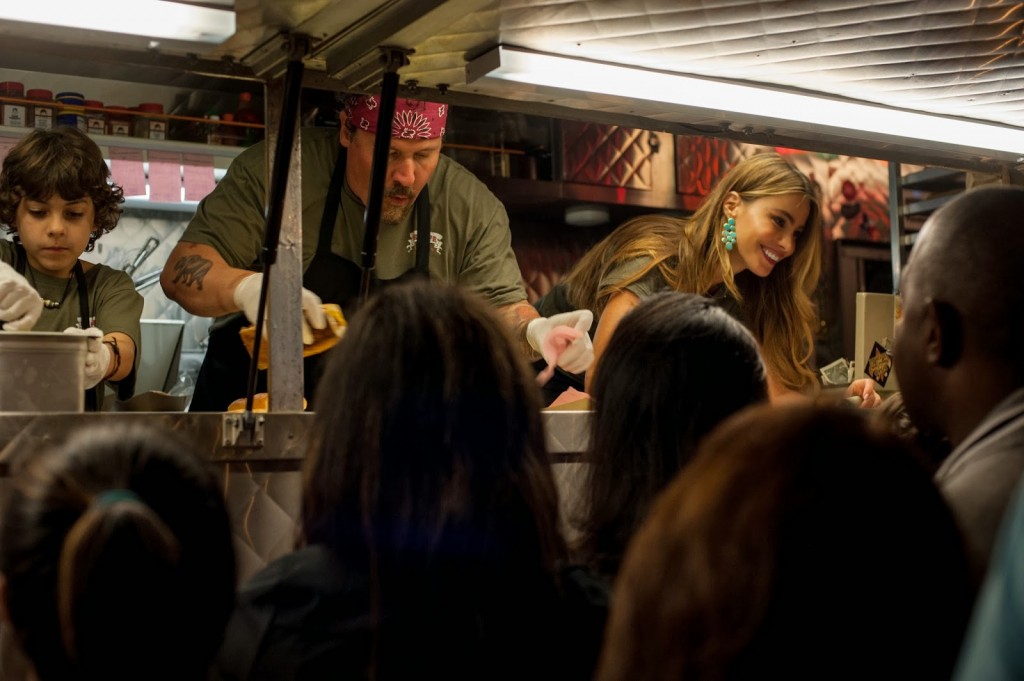 Along with his son Percy, his trusted friend and sous chef, Martin (John Leguizamo), and a refurbished food truck, Carl goes on a journey of self-discovery.  ‘Chef‘ is an enjoyable ride with A-List cameos of the multi-tasking wise guy Robert Downey Jr. and the lovely Scarlett Johansson.  Add in visits from Mr. Bonetangles, dozens of little Twitter birds and a few conversation bubbles (clearly Twitter left its mark on the film), and birthplaces of some of America’s favorite foods, and you have a road trip that really takes you on a journey into creativity and love.  This is a tale that any foodie would love right along with anyone with an active funny bone.  During the road trip from Miami to LA, Carl finds his way back to the things that matter most – food and family.

Overall, ‘Chef‘ is a feel good movie and very entertaining.  Favreau has an excellent ability to both tell the story and make you feel it in your bones.  His vision is magnificent on screen and it cannot help but inspire the viewers.  The film has an R rating for some bad language and sexual innuendos, and you won’t believe what they do with cornstarch. The progression of the parent-child relationship is definitely needed and worth sharing with the whole family. I give ‘Chef‘ high marks and I highly recommend it.  You will leave the theater hungry for the culinary masterpieces showcased within and you will be happy about it.