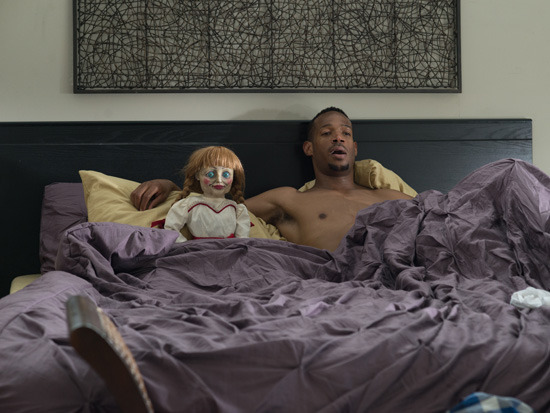 And we are back one year later with a sequel to Marlon Wayans‘ ‘A Haunted House 2‘, which is the funniest film of the year so far. Like the first movie, Wayans and crew parody the ‘Paranormal Activity‘ films along with some of the horror flicks that were released last year including ‘Sinister‘, ‘The Conjuring‘, and ‘Insidious 2‘. For those of you who missed the first outing, don’t worry, yo won’t need to catch up, but I suggest you do as it’s as funny as this sequel. After ‘Scary Movie‘ and Wayans parted ways (there is a jab at that issue in this movie), the comedic icon took a different approach with this new franchise.

He made it a hardcore rated ‘R’ comedy that relied more on vulgar comedy rather than the silly ‘Naked Gun‘ type of silliness. And it works on all levels as there are enough laughs for three movies packed into this one. This is definitely the Marlon Wayans show with this sequel. The man has proved time and time again that he is a comedic genius and has great comedic timing in every performance he gives, and with creative control over these films, he really just goes all out for it. If they were to give Oscars for comedy, Marlon Wayans would win them all.

Some time has passed since the first film where we now see Malcolm (Wayans) and his girlfriend Megan (Jaime Pressly) and her two kids in a new house where things start to go wrong and get very funny. At first, the doll from ‘The Conjuring’ shows up in the house and instead of being scared of it, Malcolm has a vivid sex scene with the doll that puts to shame the sex scene in ‘Team America: World Police‘, which is no small feat. The daughter receives a Dibbuk box (‘The Possession‘) that starts to release giants moths and possess her with some spirit. Meanwhile, Malcolm finds some old home videos from the previous owners of the house where it seems some sort of demon tries to kill the family in a series of unsuccessful murders (‘Sinister‘).

It all comes to a hilarious conclusion in the basement of the house with an exorcism with returning preacher Father Williams (Cedric The Entertainer), who delivers comedic gold every second he is on-screen. The two paranormal researchers from ‘The Conjuring‘, who here are played by Missi Pyle and Hayes MacArthur, don’t show up till later in the film, add to Wayan’s comic stylings nicely. Meanwhile, there is a bit of fun racial humor with Malcolm’s new neighbor Miguel (Gabriel Iglesias), as the two hit up every Mexican and Black joke in the book. Wayans even manages to throw in some characters from the previous film in this sequel for good measure.

Wayans has conjured up a hilarious sequel that I found myself laughing at from start to finish. He is joined by a great set of supporting actors who are completely on par with his mission in bringing his unique brand of comedy to the big screen. If Wayans can keep this trend up, I welcome many more sequels to come in this outrageously funny ‘Haunted House‘ franchise. You won’t laugh harder with another film all year.