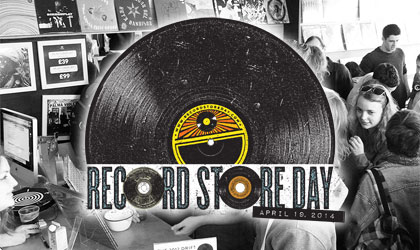 Record Store Day is coming up April 19th and looks to be insane.  We scored an early product list for Record Store Day detailing every release on April 21st including how rare each release is and prices.  There will be tons of limited releases, new releases,and classic records sold throughout the entire day.  A few releases include: The Allman Bros., Notorious BIG, Bruce Springsteen, Otis Redding, the soundtracks for ‘Ghostbusters’ and ‘The Muppet Movie’, ‘Aerosmith’, David Bowie, The Animals, Frank Zappa, and Devo. It’s going to be amazing.

The original idea for Record Store Day was conceived by Chris Brown, and was founded in 2007 by Eric Levin, Michael Kurtz, Carrie Colliton, Amy Dorfman, Don Van Cleave and Brian Poehner as a celebration of the unique culture surrounding over 700 independently owned record stores in the USA, and hundreds of similar stores internationally.

This is the one day that all of the independently owned record stores come together with artists to celebrate the art of music. Special vinyl and CD releases and various promotional products are made exclusively for the day and hundreds of artists in the United States and in various countries across the globe make special appearances and performances. Festivities include performances, cook-outs, body painting, meet & greets with artists, parades, djs spinning records and on and on. Metallica officially kicked off Record Store Day at Rasputin Music in San Francisco on April 19, 2008 and Record Store Day is now celebrated the third Saturday every April.