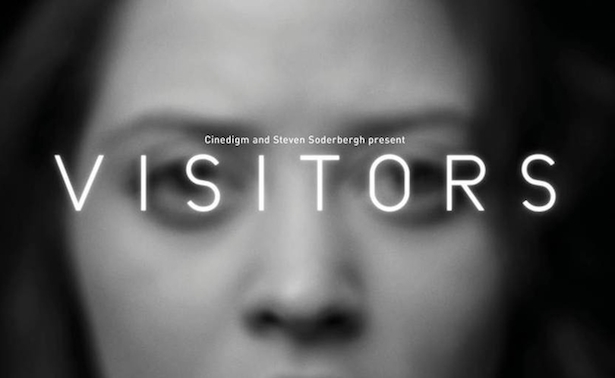 I always assumed reviewing films would be an extremely awesome thing to do for a living. I never took into account that you won’t always enjoy what you review. I can watch documentaries, I actually prefer them at times. National Geographic and Smithsonian documentaries are great! I love history, current events and learning about new weapons or drugs that are problems now. I don’t even require things being in English to enjoy them. I can read subtitles and if the actors are good enough I don’t even have to rely on subtitles.

I am reviewing ‘Visitors‘ today. I watched it. It was 1 hour and 27 minutes long which is about 80 minutes longer than necessary to realize my initial instincts were correct. It was a waste of time, film and resources. I was really hopeful when the initial credits began saying it was presented by Steven Soderbergh. I loved ‘Oceans Eleven‘ and ‘Haywire‘, so how could this be that bad. Then it dawned on me, it was just ‘presented by’ him. After the first 10 minutes I realized Soderbergh didn’t really have anything to do with the film, other than maybe believing in the director and wanting to give him a helping hand. Let me jump right into dissecting this effort at a documentary.

While I understand Godfrey Reggio brings a completely unique viewpoint to the documentary genre, I would not have watched this on my own. I would have much preferred to watch a documentary of Reggio’s life. Born in 1940 and entering a life of religion at 14 when he became a Christian Brother, technically a Catholic Monk. He spent 14 years in fasting, silence and prayer. While this portion of his life leads to the logical reasoning behind there being no dialogue in the documentary, I am not so enlightened as Reggio.

The film is presented in black and white. When I hear that term, my mind instinctively conjures images from 1939’s seminal classic ‘The Wizard of Oz‘. Sepia tones and deep blacks with shocking whites is not what this film featured, at all. The cinematography was beautiful. Extremely elegant and provocative on its own. I  actually think shooting this in color would have been a big mistake. The images were absolutely beautiful in color, perfect capture of a point in time. Sadly, the overall enjoyment of the film was not as good. 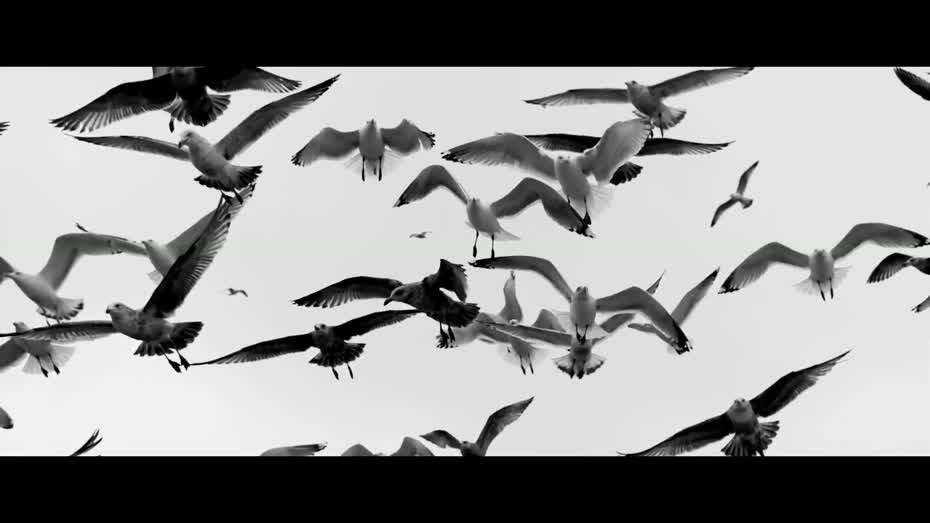 The music of Philip Glass (‘The Hours‘, ‘The Illusionist‘, ‘Watchmen‘) is usually an enjoyable part of a film, he’s made a career of composition, and he’s very good at it. The first movement of his piece for this film was constantly leading to resolution that never came. The sequences that were attached with this section of the score were extremely slow building. There was over a minute given to each image that panned at such an excruciatingly slow speed, in contrast with the instrumental building that I had to take a Xanax 28 minutes into viewing because my Anxiety Disorder was being affected. The film sequences focused on a gorilla, a building from a ground level viewpoint with clouds zipping past, then to individual faces that I wasn’t sure were anything other than pictures until they would occasionally blink. I kept watching to see if there were obvious breath signs because there was so much time given to each individual. At about 30 minutes there was a woman in a white shirt buttoned only by one or 2 buttons at breast level, her hair was blowing wildly and her hands were moving slowly over the top, then faded out, this was the most activity in the first 30 minutes, also the only image of anyone dressed like that. I’m still trying to figure out what artistic meaning I was supposed to derive from that scene.

There was a focus on fingers obviously working electronic devices like iPad, computer mouse and typing that had all objects removed so only the hand movements were shown. I could see a juxtaposition of blank, motionless faces but active fingers showing how much we interact with electronics versus how active we are in society. There were even piano playing fingers present, I only recognize that because I am a pianist and recognized finger patterns, but I don’t understand it’s inclusion in that segment.

There was maybe a 10 minute period where children were featured in such a slowed state that I was counting how long a smile stayed on screen because it was the only thing that happened. I think watching a snail race would have actually been more active than the pacing of this film was. At about 40 minutes in, I was wanting another Xanax because of how slow it was. I really don’t understand it’s reasoning on going that slow. From closeups on building faces being the only other image for half the film, we saw a change when a broken down, weed grown amusement park became part of the scenery. Actors faces slowly showed different emotions in different situations. We did not see what was causing reactions, just their facial expressions. From the amusement park to what looked like an image right out of a Louisiana swamp with bald cypress trees jutting out of the unbroken water. Then to falling garbage from a landfill. There was no denying the intention of those images. 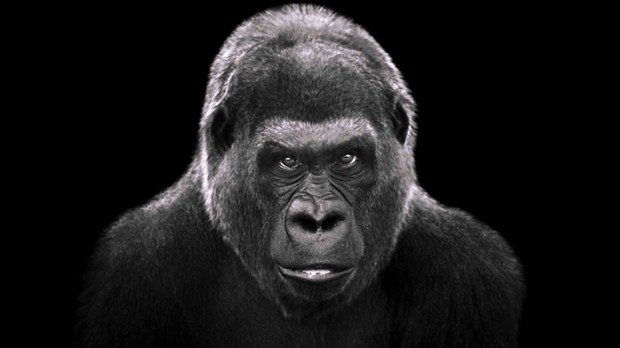 After 87 minutes, I could escape from the intensity of this film. It’s definitely a serious look at society from Reggio’s eye. There were 3 times during the film, beginning, middle and end that we focused on a gorilla. Maybe Reggio was trying to showcase a belief that humans are a product of Darwinism instead of the creation theory? I’m not sure of anything when it comes to this film. All I do know for sure is my anxiety level increased and my neck got extremely tight from the music constantly taking us to the denouement that never came.

I seriously believe we could have gotten the overall meaning from this one by reading a ‘Save The Planet’ bumper sticker, or watching the plastic bag scene from ‘American Beauty’. This seems a film only those that deign to pass themselves off as pretentious would enjoy.  I read Tolstoy and Dostoevsky novels for fun in high school, but I couldn’t enjoy this one. However, if you enjoyed ‘The Qatsi’ Trilogy‘ or ‘Baraka‘ this will be right up your alley.