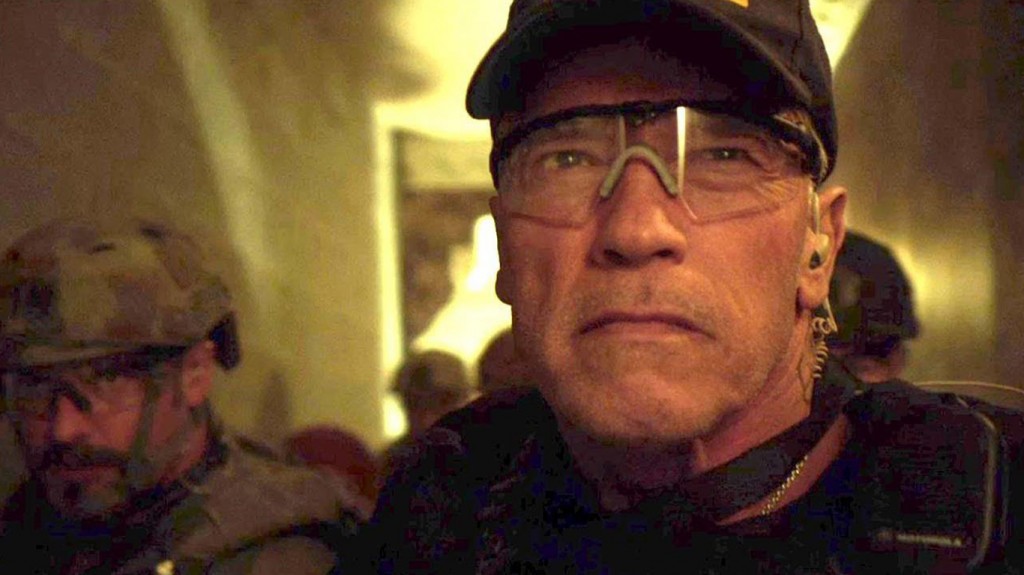 Arnold Schwarzenegger has been on quite a role since his political career in California. He has come back in full force to the movie world and has given us three films, including this one, with five more projects on the way. Needless to say, he has been busy. The first two films, since his time in the Governor’s chair in California were ‘The Last Stand‘ and ‘Escape Plan‘, both of which were PG-13 action vehicles for Schwarzenegger that had a silly and highly entertaining premise, even though the plots of both films were ridiculous. But in both of those movies, we received Arnold’s famous one-liners and his angry glare as he looks down upon his enemies with a giant machine gun in his hand, ever so ready to add to his impressive body count.

Writer/director David Ayer, who is known for directing the recent ‘End of Watch‘ and writing ‘U-571‘ and ‘Training Day‘ amongst others is here to tell us that he has gloriously brought back Schwarzenegger to true form in ‘Sabotage‘. If you’ve been waiting to see Arnold back in an ultra violent movie with enough blood and gore to compete with an ‘Evil Dead‘ film, then you are in luck. But be cautioned, for as the credits roll, your brain will try to make sense of what you just saw on screen and how it all tied in. If you try to do this for more than 30 seconds, you might have a breakdown, as you’ll realize the plot is such a failure and the screenplay is completely laughable, that nothing seems to make sense on screen. At least Schwarzenegger got to smoke a cigar the size of a cucumber through the whole movie, so there’s that.

The film opens up with Schwarzenegger watching a video of a woman being sadistically tortured as he seems to be related to the woman on screen (it’s his wife). We cut to an undetermined time later where John ‘Breacher’ Wharton (Schwarzenegger) leads an elite undercover DEA team to take out the most dangerous drug cartels. The team consists idiotic nicknames of ‘Grinder’ (Joe Manganiello), ‘Monster’ (Sam Worthington), ‘Sugar’ (Terrence Howard), ‘Neck’ (Josh Holloway), ‘Pyro’ (Max Martini), Tripod (Kevin Vance), and Lizzy (Mireille Enos) , who for some reason doesn’t get a nickname, but is one hell of a drug addict.

This team takes down a drug cartel and comes across a bunch of money in their basement. The team take ten million off the top of the stash to keep for themselves, which is a recurring theme in ‘Training Day‘. But when the day is over, the ten million dollars goes missing, leading Internal Affairs to grill each member of this undercover squad for several months. Once things settle down, Breacher tracks down his team again who seem to have be cracking dick and fart jokes and playing video games for the last six months, rather than training to take on another cartel. 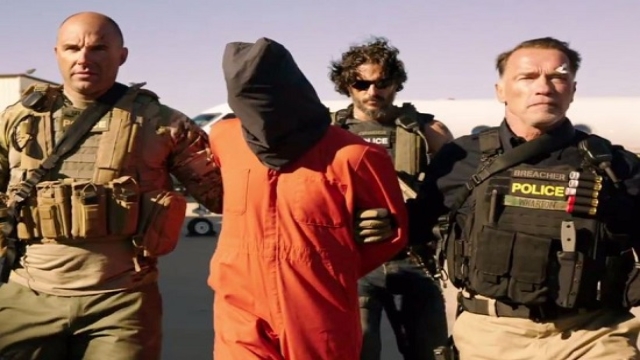 However, each one of the team members are killed off in very gruesome ways, which has the remaining team members along with police detective Caroline Brentwood (Olivia Williams, whose character goes nowhere) looking for a certain cartel that might be responsible for this. But through this lazy and clunky screenplay and story telling, we can tell that one of the team members might be committing these horrendous murders against their own as they start to turn on each other.

With cheesy lines of dialogue throughout, gratuitous nudity, and a confusing and horrible story structure, this bloodbath of a film might leave you unsatisfied, despite the above mentioned traits. Schwarzenegger seems to be at home here as a leader of a group of macho people, but it never goes from that one note trait. The rest could be played by anyone, anywhere, at anytime, and are mostly indistinguishable characters. Are these guys heroes or villains? Well maybe that’s for you to decide, but whatever you come up with, we can all agree that ‘Sabotage‘ is still a killer Beastie Boy song and not a great movie. And no, they did not play the song in the film, which feels like a missed opportunity, like the entire movie was.