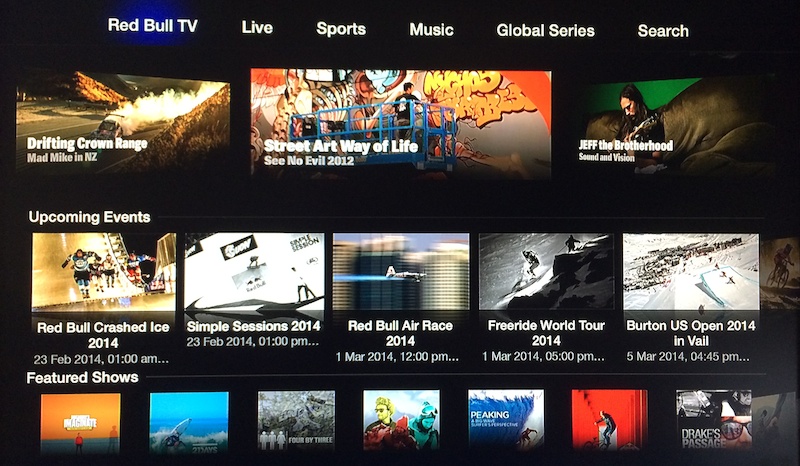 Adrenaline junkies all over the world can get their fix with Red Bull drinks. Now the Red Bull name is being attached to Apple TV. That’s right, Apple TV will now have an app on its home screen for Red Bull TV. What is Red Bull TV, you ask? Red Bull TV is a digital action-sports and entertainment network produced and distributed by the energy-drink manufacturer. Red Bull’s films, shows, clips and live programming will now be available on Apple TV.

High-action and high-energy have always defined Red Bull, and after launching the TV platform in 2010 Red Bull TV promotes the beverage image through inspirational entertainment programming, all for the price of a few Red Bull ads . You can also get your energy-spiked tv fix online  via Apple iOS, Android apps, Google Chromecast and Samsuns Smart TVs, as always you can view some highlights on Red Bull’s YouTube channel which holds 3.25 million subscribers.

Red Bull Media House is well known for the October 2012 space jump by skydiver Felix Baumgartner. The coverage of the record-breaking free-fall jump was produced and distributed by Red Bull Media House. Baumgartner jumped from 24 miles in the stratosphere above New Mexico and breaking the sound barrier during the 10 minute fall.

Coming this year, the live programming will expand to include third-party events on the World Snowboard Tour, including the Burton European and U.S. Open. The lineup also includes Red Bull-produced events like the Red Bull Rampage featuring free-ride mountain bikers racing on a near-vertical sandstone ridge near Virgin, Utah.

Red Bull looks like it does more than just give you wings. Apparently it gives you some wicked good digital programming.