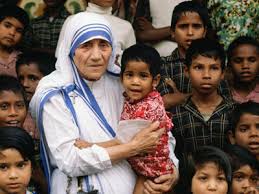 The almost-sainted Mother Teresa has inspired a lot of people to do a lot of things, take vows of poverty and selflessly give to the poor among others. Movie-making is one of the stranger things that people attribute to her influence. Keir Pearson is on deck to write a screenplay titled, ‘I Thirst‘. Pearson is making news as co-writer of ‘Cesar Chavez: An American Hero‘ set to release at the end of March of this year. “Keir’s presentation and his Oscar-nominated script of ‘Hotel Rwanda’ and his sensitive script for ‘Chavez’ made him the perfect choice,” said Tony Krantz.

“‘I Thirst’ is the first and only authorized film about the life of Mother Teresa on the big screen. We couldn’t be more excited for this movie about a woman who stood for total commitment, faith, charity and love.”Pearson is undertaking a research trip in India and Mexico and will write the script upon his return. They are eyeing a release date in 2015.  In addition to Krantz (‘Mulholland Drive‘, ‘Felicity‘)  and Origin Entertainment, The Mother Teresa Center are all producing the biopic. The Mother Teresa Center, the legal trustees of her estate, will serve as technical consultants.

Becoming a missionary at age 18, Mother Teresa founded the Missionaries of Charity, which consisted of over 4,500 sisters and is active in 133 countries. Members of the order must adhere to the vows of chastity, poverty and obedience, and the fourth vow, to give “Wholehearted and Free service to the poorest of the poor”.