Guy Ritchie Is Looking to Make A King Arthur Movie!!!

Tale as old as time…no, not ‘Beauty and the Beast‘. I’m talking about the King Arthur legend. The story inspired such classic movies like ‘Excalibur‘, ‘King Arthur‘, and BBC’s ‘Merlin‘. There are some less classic offerings from ‘Monty Python and the Holy Grail‘ and Disney’s 1963 animated ‘The Sword in The Stone‘. But I digress.

Filmmakers have looked to the medieval story time and time again trying to put a fresh spin on the magical folklore tale. Guy Ritchie is one such movie maker. He’s a proven director when it comes to genre films with the two ‘Sherlock‘ movies starring Robert Downey, Jr. Also Ritchie gave us ‘Snatch‘ and ‘Lock, Stock, and Two Smoking Barrels‘, but has yet to give us something that good since.

Ritchie is hoping to span the Arthurian story over six films. Joby Harold (‘Awake‘) wrote the script for the first film. Ritchie’s partner, Lionel Wigram who produced their joint venture of ‘Sherlock‘ and 2015’s ‘Seventh Son‘, is attached to produce, along with Akiva Goldsman and Harold and Tory Tunnell. Ritchie and Wigram have developed in the past, a version of the King Arthur saga running off a script written by John Hodge. That project faded out not gaining the necessary momentum. Hodge penned screenplays for ‘Trainspotting‘, ‘The Beach‘ and ‘A Life Less Ordinary‘. 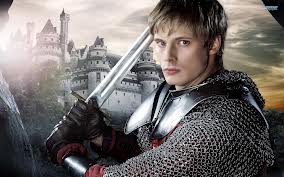 David Dobkin wrote ‘Arthur & Lancelot‘ and sold it to Warner Bros for $2 million in 2011. Colin Farrell was on tap to portray Lancelor and were hoping Gary Oldman would sign on for the part of Merlin. The role of Arthur was being eyed by Kit Harrington from ‘Game of Thrones‘ success.  ‘Arthur & Lancelot’ didn’t get off the ground because their $130 million budget was about $20 million too high. Warner Bros considered remaking John Boorman’s ‘Excalibur‘ with Bryan Singer attached.

This definitely looks like the time of Arthur Pendragon in the entertainment world. With every new incarnation of the legend, it brings a fresh look at characters from different vantage points that make each movie a new experience.