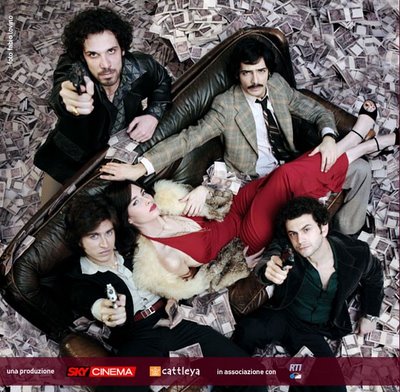 The pay cable channel, ‘Starz‘ is now developing a US adaptation of the Italian gang drama called ‘Romanzo Criminale‘, which was a series in Italy in 2008 that centered around a gang that controls Rome’s heroine trade in the 70s and 80s. This US version will be set in Philadelphia during the late 60s and early 70s, and will chronicle the rise of the gang who attempt to make loads of cash by any means necessary.

Could this be the next ‘Sopranos‘? I’m guessing not, but it definitely sounds like fun. Specifically being set in the 60s. And Steven S. DeKnight will be serving as creator and showrunner for the show. DeKnight is responsible for Starz’s highest rates series, ‘Spartacus‘. ‘Romanzo Criminale‘ was based on a novel by Giancarlo De Cataldo, which was written about the true exploits of the notorious Magliana gang.

Starz has had a few good original series, but nothing that is compared to anything on HBO or Showtime. Maybe with this recent period piece on mafias and gangs, Starz will have a huge hit on their hands. But they need A-List talent and a good crew behind this to keep this going for more than one season. I hope for the best.  Your thoughts?