Film Review: ‘Out of The Furnace’!! 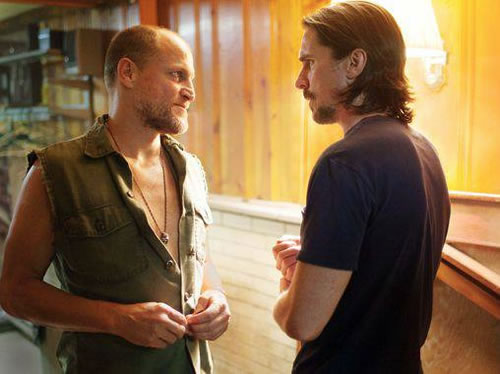 Scott Cooper’s second film ‘Out of The Furnace‘ has a lot going for it. The script and especially its amazing A-List cast might draw out a decent crowd, but a sour taste might be left in your mouth after the end credits start to roll. Cooper’s first film was ‘Crazy Heart‘ and had some similar somber tones to it as this film does, but it’s nowhere near how brutal ‘Out of the Furnace‘ truly is. But what makes this blue-collar flick ultimately suffer is the amount of filler that has nothing to do with actual premise of the movie and keep the film from moving forward at a steady pace.

The opening scene will literally knock you out of you seat and wants to set the tone for what brutality is to come as we meet a psychopathic hillbilly named Harlan DeGroat (Woody Harrelson amped up to 10), as he forces a giant hot dog down his date’s throat at a drive-in theater. And when a guy comes over to stop the abuse, DeGroat viciously attacks the man and doesn’t stop, then throws his date out of the car and leaves. It’s as almost as this movie is preparing us for some high end ultra violence later on.

Then we finally meet the Baze brothers, Russell (Christian Bale) and Rodney (Casey Affleck) who are watching their father spend his last few days on his deathbed. As Russell works a the local mill and tends to his girlfriend Lena (Zoe Saldana), Rodney tends to be running up big debts with a local bookie named Petty ( Willem Dafoe), while he’s on military leave from overseas. Russell does the best he can to keep his kid brother from being harmed and even tries to pay off some of his debt, but Rodney doesn’t learn.

And soon, in order to pay back his debt, he is fighting in illegal bare knuckle boxing matches in various mud pits and abandoned warehouses. In what seems like an homage to ‘Snatch‘, Rodney is told time and time again to take a fall during a fight, but he simply can’t force himself to take fall as the fight begins. Now to pay a large sum of money owed and against warnings everyone gives Rodney, a fight is set up with DeGroat’s people, who are known as backwoods imbred hillbillies, who thrive on drug trafficking and violence. Basically they are such pure evil, that the local authorities won’t touch them.

Well as you can imagine and as DeGroat says in the first scene of the movie, “I’ve got a problem with everyone”, and things don’t go so smoothly. Thus our tale is set in motion and the title of the film comes into play where like the ‘Dark Knight Rises‘, someone comes ‘Out of the Furnace’ to defeat evil. It’s a great set-up, and Cooper gives us some good time to develop these characters and their struggles. However, there is about 30-40 minutes in the film that could have been completely left out, as they didn’t advance this story in the least bit. Particularly, where Russell is sent to prison for a number of years due to a drunk driving accident, which led his girlfriend Lena to start dating the local community sheriff (Forest Whitaker), who might only have less than three minutes of screen time.

We clearly see that Russell is a good guy who is always wanting to the right thing by his family and even his dead end job. But he’s proud of what he has and Bale shows his pride well here. Dafoe and Affleck are near perfect here with Affleck pulling of a range of emotions as he tries to just escape the dreary town he is in. Zoe wears every emotion on her sleeve and we want to cry every time with her, whereas Harrelson is always perfect as the crazy psychopath.

Again, the pacing of this revenge flick is completely off and might have worked better as a short film, rather than a feature length. There is just too much here that doesn’t keep our main plot going forward with nothing being used as a resolve.