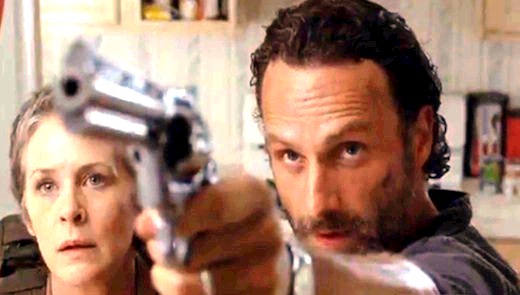 The last episode of ‘The Walking Dead‘ left us with the prison under siege by a deadly flu virus and Carol as the killer of Karen and David. I see why Carol killed them for the greater good. Unfortunately, she was not able to contain the virus and a group is out in the middle of nowhere getting medicine. Lets pick up where we last left off.

Rick is bandaging up his hand in the cell block and thinking. Carol goes and sees Lizzie in quarantine. Carol wanted to see her because she is going on a run with Rick. While she is talking to Lizzie, Rick is filling up the Hyundai with gas. Lizzie is telling her that people have not died yet. She tells Carol that they still come back as something, even if its not the same. Rick is now walking through the cell block where Karen stayed and is looking at the blood on the mattress. He is now seeing the extent of what Carol did. Lizzie is now talking about how they all change. Carol is telling her to run if there is danger and not to be afraid to kill if necessary. Lizzie accidently calls Carol mom and Carol tells her not to. Lizzie says that she is not afraid to kill, but she is afraid. Carol tell her that you fight until one day you change. “We all change.” You see Rick now looking out the fence.

Ty, Bob, Daryl and Michonne are walking through the woods to another town. Ty is having issues with everyone being sick. Rick and Carol are in the car. Carol said that Maggie wanted to come and Rick wanted her to say there. Carol tells him that she killed them quick and to stop it from spreading. She said that they were a threat and she was trying to save lives. Rick says. “Maybe.” Daryl and Michonne are talking about the marker he has. Rick and Carol pull into a residential area. They see a station wagon with  a wiped down car.  Rick says there are there to get stuff for Hershel. They are also looking for food.

Daryl’s group comes upon a shop in the middle of the woods. They find a minivan hidden in some vines. Daryl is going to try to get it fixed and started. The group starts to cut through the vines and some walkers come out. Ty cuts through some wires and it seems that the walkers locked themselves up in the building while they were still alive. Ty is still suffering from some depression after losing Karen. Daryl had to save him from a walker. I am still shocked at how hard Ty is taking everything and how he cannot shake off the death of Karen.

Rick and Carol are going through houses and medicine cabinets. They are in a house and a walker spooks them. After they kill it, a live couple, Sam and Ana, come out of the room with food. They throw a peach to Rick and he just looks at it. Funniest moment I have seen in a while on this show. Rick talks to them about what they have been though. The man has a dislocated shoulder and Carol fixes it. The couple was in the bathroom for two days and Carol cannot believe it. Sam saved Ana in a camp since she has a bum leg. Rick asks where they are headed next. They are going from place to place and Rick decides to start asking the three questions.

Daryl and Bob is now inside the shop getting a battery, while Michonne and Ty are outside clearing the brush. Michonne is afraid that he is trying to get killed. She tells him that anger makes you stupid and will get you killed. He asks her about the Governor and if she is still angry about that. She says that she would cut him in two if he was in front of her. She is no longer angry. Ty asks why she is still going out looking for him and she says that she does not know. Daryl and Bob see that the walkers committed suicide and Daryl unforgiven about it. Bob is more sympathetic and when he sees a walker and some pictures on a board, he kills the walker to put it out of its misery. You can now see the difference between those who are strong and those who are weak. I think this will play out more in future episodes. 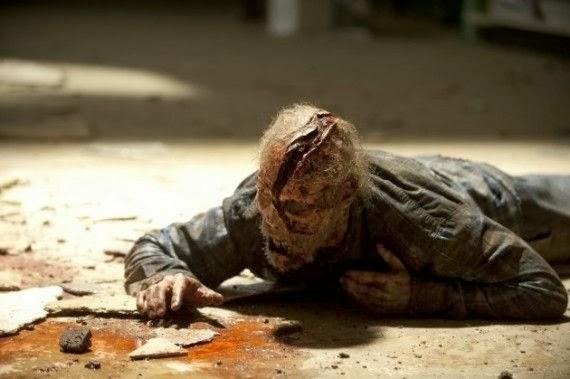 Carol and Rick are still getting medicine and Rick is telling Sam and Ana about the prison. The way Carol talks about the girls shocks Rick. Rick wants them to stay put, but Sam and Ana want to go out and gather stuff. They also want to go back to the prison with them. Rick allows them to go on a run and gives them a gun. Rick wants them back in two hours and he gives them a watch.

Daryl and Bob are talking about how Bob almost just walked instead of letting Daryl pick him up. Bob says that he drank just to make it through the quiet after going through two groups. Bob tells Daryl what happened when Zak got killed. Daryl says that thats bullshit. He has Bob go into the van to start it. He does and they all pile into the van. Daryl tells Bob that Sasha picked the spot where they picked him up and that he no longer has to do stuff alone. They drive off in the minivan.

Rick and Carol are in another house looking for prescriptions. He asks her if she thought he was right to let the kids come back with them. She says that he made the right call if they are strong enough to help them survive this. He is wondering if they are strong enough. Carol brings up that she killed two people and haven’t said a word about it. He asks her what she wants him to say and she tells him that he needs to face reality so they can live. She tells him that he just can’t be a farmer. She calls him a good leader and he says that he never murdered two of their own. She says one and he tells her that he Shane was going to kill him. She says that the two people were too and Rick tells her that she doesn’t know that. Then Carol gets mouthy….She asks him if he would kill them if Judith or Carl was in harms way or would he go back to his crops and hope it all goes away. She tells him that he doesn’t have to like what she did, but he has to accept it.  This is the turning point for Rick. This conversations shows that the two of them are going to butt heads and that she wants to be leader now. She is making decisions that a leader has to make since he stepped down and that he is to accept it. That seals Carols fate. i think Carol has gotten too ballsy anyways with her decision making.

Darlys group has made it to the vet hospital. She go through a classroom and gather supplies. Bob sees a bottle of liquor and grabs it. Rick and Carol go outside and stop to gather some tomatoes. Rick asked Carol how she knew to put a shoulder back. She said it was easier to put her shoulder back herself instead of going to the hospital. She talks about how strong she is. When asked about Sofia she says “Shes dead. That is somebody else’s slideshow.” Rick then talks about his past with Lori. They get up to move on and round the corner to see blood and a basket of fruit. They follow the blood and see Anas leg by a fence.  Both look through the gate and see Ana being eaten. Carol says they should get back since Sam is probably waiting. 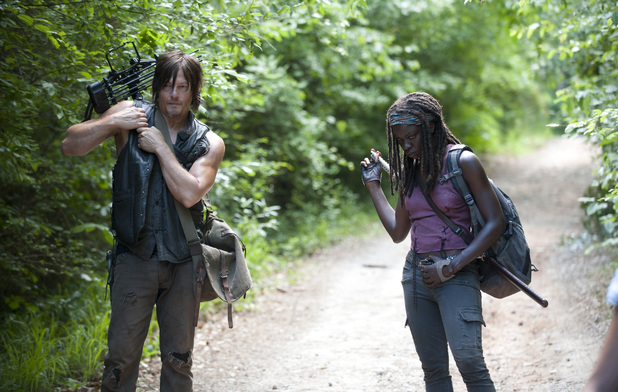 Michonne and Bob are getting meds in another classroom. Bob is familiar with medicine. Ty and Daryl get back and they decide to leave with everything. They walk out the halls and see walkers where they came in at. Those walkers had died of the flu. They go into another room and see two doors bolted with hands coming out. They decide to chance it since the other ones had the flu and go out that way. Carol and Rick are waiting for Sam. Carol says it has been too long and that they have to go. Daryls group is still fighting their way out of the building and go out the window. Bob jumps out and almost falls off the roof. He is fighting with some walkers below with his bag. He gets his bag and pulls it up. When he does, his bottle comes out and it is shown that that is all he had in his bag. Daryl gets the bottle and is pissed. Daryl tells him that maybe he should have kept walking that day. Daryl is going to toss the bottle and Bob tells him to stop and puts his hand on his gun. Daryl walks over and gets in his face. Ty tells him to let it go. Bob says that he didn’t mean to hurt anyone, he just wanted it for when it gets quiet. Daryl tells him that if he takes a drink of it before the meds get into his people,he “will beat his aass into the ground”. This is the Daryl that I missed. The redneck, ass kicking Daryl. Daryl was ready to kill him on that rooftop.

Rick and Carol are back at the Hyundai. Carol tries to get in and the door is locked. Rick tells her that those people might have lived and now they are dead. “That was not your decision to make.” He says when Ty finds out, he will kill her. The others will not want her there. Rick says that if everyone else dies but those two and his kids, he does not want her around them. Carol does not even put up much of a fight. She says that no one has to know and though he was done making decisions. He said that he is making the decision for him. She says she could have let them live, but she stepped up. She wanted to take Lizzie and Mika and Rick says no. Rick says that she is strong and will start up and find others who don’t know what she did.

Daryl is sitting in the car with his rock. Michonne gets in and tells him that he is right. She says the trail went cold for the Governor and that she does not need to go out anymore. They drive off. Rick is helping Carol load up the station wagon they first saw. She gives him the watch her husband gave her on their first anniversary. She gets in the station wagon and drives away. The last scene is everyone driving and being quiet, including Daryls group.

The biggest shocker was that Rick did what he had to do. I believe that getting Carol out of the prison was the best thing to do. I understand why he did it, but I know there is a line divided on this. Carol was becoming more devoid of human emotion and turning more and more like the governor. I do not think for one minute that she is gone. I wouldnt be surprised if she met up with the governor and they storm the prison. I can’t wait to see what is going to happen. So let me know, Team Rick or Team Carol?