‘The Simpsons’ Animators Will Produce A New Cartoon Centered Around the WWE!!! 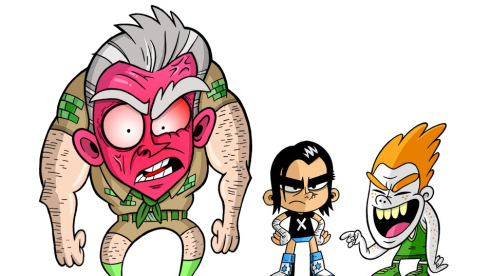 I might just snap into a Slim Jim here, but I have awesome news. WWE Studios and Film Roman have teamed together to produce and finance and new web series called, ‘Camp WWE‘, which is a comedy series for adults that will center around what WWE wrestlers were like when they were kids. This sounds like all sorts of fun.

Mike Benson will write the series, which he has written for HBO’s ‘Entourage‘ and ‘The Bernie Mac Show‘. Film Roman has produced the animation for ‘The Simpsons’ and ‘King of the Hill’ over the years and general manager Dana Booton said, “With a combination of their unique personalities, distinctive characteristics and huge built-in loyal fan base, WWE Superstars make for ideal animation subjects in ‘Camp WWE.”

In the series, which will be three minute episodes that will be showcased on WWE’s media, the parents of the WWE superstars, send off their kids with all of their costumes and weapons to Camp WWE, where they will be trained to become role models and athletes. And the leader of this camp is none other than the feared Mr. McMahon.

So far there are 13 episodes on order for this little web series, according to Variety, and I can’t wait to see it.