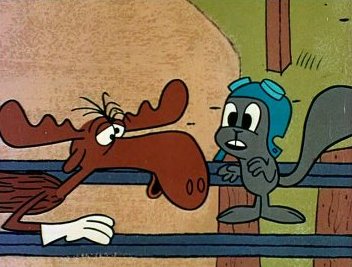 It looks like DreamWorks Animation wants more ‘Rocky & Bullwinkle‘ material, because they just announced that they will be releasing an all-new short film featuring the classic characters in animation form sometime in 2014. I’m willing to be it will be in March, since DreamWorks also announced that their new animated feature ‘Mr. Peabody and Sherman‘ will be released  then as well.

June Foray will voice Rocket “Rocky” J. Squirrel, as she has voiced him since the start of those characters. Gary Trousdale will direct the short with Tom Kenny (SpongeBob SquarePants) will be Bullwinkle Moose, according to Variety. Trousdale’s big hit was Disney’s 1991 ‘Beauty and the Beast‘. Executive prodcuer Tiffany Ward said, “For an incredible 83 years, June Foray has left a tremendous imprint on the entire entertainment industry. Her amazingly indelible performances have enchanted generations and earned her a permanent place in the annals of popular culture.”

I guess they thought that we all forgot about the 2000 live-action version ‘The Adventures of Rocky & Bullwinkle‘ that starred Rene Russo, John Goodman, and Robert DeNiro, because that is one of the worst films ever made. But maybe they are testing the waters with a short, in order to make a new feature length one. I’ve always enjoyed the classic cartoons, but can’t get behind the whole CG 3D animation with this particular cartoon. There is just to much nostalgia with it.

And who knows if Rocky and Bullwinkle will show up in the ‘Mr. Peabody and Sherman’ film, after all, they were part of the old ‘Rocky & Bullwinkle’ shows when it was called ‘Peabody’s Improbable History‘. You can check out the trailer for it below.