Keeping an open mind about the third installment of movies featuring Richard B. Riddick (Vin Diesel) was admittedly difficult. After enjoying 2000’s Pitch Black, the second movie, Chronicles of Riddick, did not live up to the expectations and the budget it was given. Within the first 15 minutes of the latest movie, Riddick, my open mind was wasted. The newest version rehashes old story lines, needs some serious editing, and cannot decide if it is going for cult-kitsch horror or serious action drama.

Riddick begins with its main character seriously injured and marooned on an alien planet, having thought he was returning to Furya. For the first fifteen minutes there is no on else – just Riddick’s animal kingdom deathmatch, as Vin Diesel drops one liners and eludes or kills various alien species. Hyena dogs, fish, carrion birds, and giant swamp beasts all try for a piece of Riddick, but he outsmarts them even making himself immune to venom. After befriending a hyena dog pup that becomes his pet, Riddick exists for months on the planet.

When he and his pet stumble onto an abandoned space outpost and notice that as dark clouds roll in a terrible planetary event is about to take place, Riddick decides it is time to get out of Dodge and activates a beacon in hopes of hitching a ride/taking a spaceship. He knows that many unsavory characters will want the reward on his head, and soon two different crews of bounty hunters show up, causing competition, and self-interest to take over as Riddick methodically takes out the crews as they also work to take each other out. 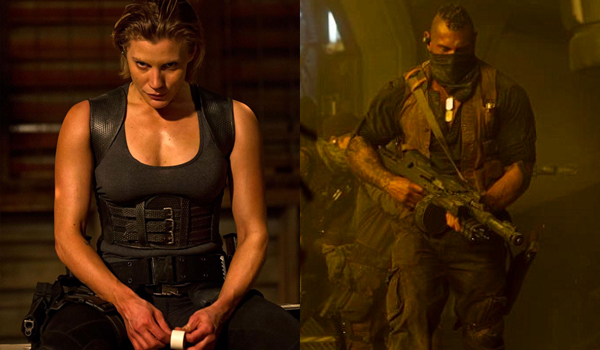 This self-destruction of the crews is an almost interminable portion of the movie as we try to understand why the second crew is more interested in Riddick being taken alive. The second team’s leader, played by Matt Nable, is professional, maintains a disciplined, tidy crew, and is a badass fighter. In comparison, the first crew to arrive is almost completely made up of men with Spanish surnames who come off as inept, ragtag, and not exactly at the top of the bounty hunter business. Their leader, Santana (Jordi Mollà), is at one point cruel and driven, yet becomes bumbling comic relief by a quarter way through the film. Possibly it is best to avoid the issue of the surnames, but it was difficult to see an entire group of Hispanics portrayed as the lesser crew.

In addition to this offense, the one strong female character of the film, played by Katee Sackhoff, also happens to be a lesbian. Throughout the movie, men seem unnaccepting of the fact that she prefers women, so it is supposed to be amusing when none of them can have her. That’s until the end, when finally shown what a real man looks like, she decides that she wants to ask Riddick, “real sweet like”, to have sex with her. Vin Diesel: restorer of heterosexuality.

The closest this movie is to enjoyable is when the that cataclysmic event that Riddick has warned about comes to be and alien swamp monsters surround the abandoned outpost, intent on killing everyone. Here, the movie takes on an almost goofy horror movie (think Feast) feel, and it would have  been great if Riddick stuck with this theme. However, it had problems deciding what it wanted to be, and instead it is confusing to understand if the producer/director took this seriously at all, or if they just decided that at this point, they might as well go kitsch.

Overall, this was a confused movie with one true redeeming set of scenes. It’s easy to laugh at, but I don’t believe it was always the point. If you were still able to enjoy the second Riddick movie, you may as well give this one a try, but I’m giving it two stars.

Raised in small town West Texas and still trying to recover from the experience, Suzanne craves a strong cocktail, is drawn to shiny and brightly-colored objects, and aspires to be a phenomenal guitar player having taken no lessons. She writes movie reviews for boomstickcomics.com and thinks Annie is the shit.